The valuations of multi-industrials company Illinois Tool Works (NYSE:ITW) and its peer 3M Company (NYSE:MMM) are at historical highs, that's pretty easy to see. In such cases, stocks usually need strong earnings growth in order to justify such valuation ratings, so the question turns to what kind of growth can Illinois Tool Works generate and is it enough to buy the stock?

Management outlined its plans at the recent investor day event so let's take a closer look at the investment case for the stock. 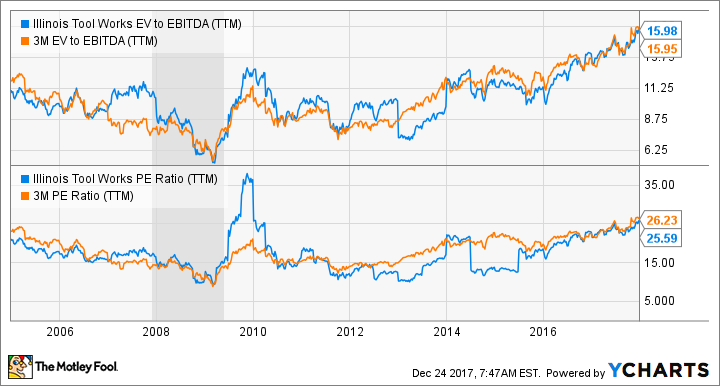 Having come to the end of its 2012-2017 plan, management promptly outlined its future mid-term expectations in setting out its 2018-2022 annual goals. The general theme is that 2018 will mark a kind of transition from generating growth through repositioning and restructuring the portfolio, toward, what management calls, sustaining differentiated performance.

This means the company's emphasis will shift from generating margin expansion through portfolio restructuring toward increasing organic growth while maintaining the industry-leading margins built up from the previous plan. 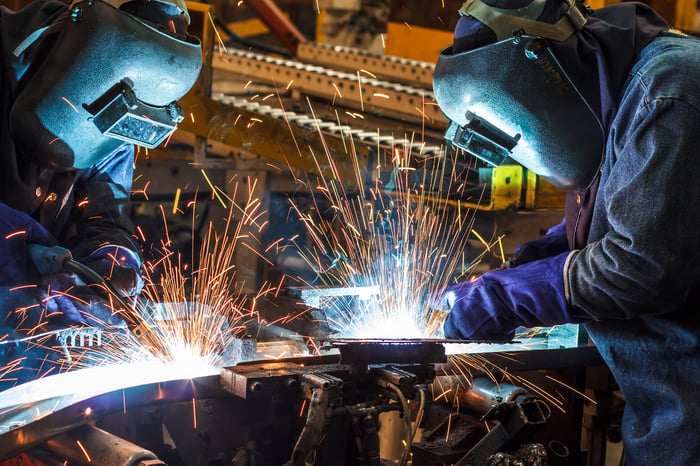 Illinois Tool Works has benefited from a cyclical recovery in welding in the last year. Image source: Getty Images

The following table shows how the 2018-2022 goals relate to increasing annual organic growth to 3%-5% with 25%-plus margin, compared to the 2012-2017 target of increasing margin from 16% to 24%. The key takeaway is that the emphasis will shift toward organic revenue growth.

The 2018-2022 targets are impressive, and they come on the back of some outstanding execution by Illinois Tool Works's management in the last five years -- margin expansion has continued through 2017 -- however, there is cause for circumspection, particularly for a stock on such a lofty rating.

3 reasons to be concerned

First, focusing on the 2018 guidance, it's notable that the organic growth range of 3%-4% is below the 2018-2022 goal of 3%-5% -- somewhat surprising given the strength of the industrial economy. This suggests that the company is going to need another few years of good economic growth in order to hit its targets.

Second, although guidance implies margin expansion in 2018, a large part of it is intended to come from what management calls enterprise initiatives. For example, management claims to have divested more than 30 businesses in the last few years and stopped producing "hundreds of commoditized product lines" in an effort to focus on its most profitable activities. 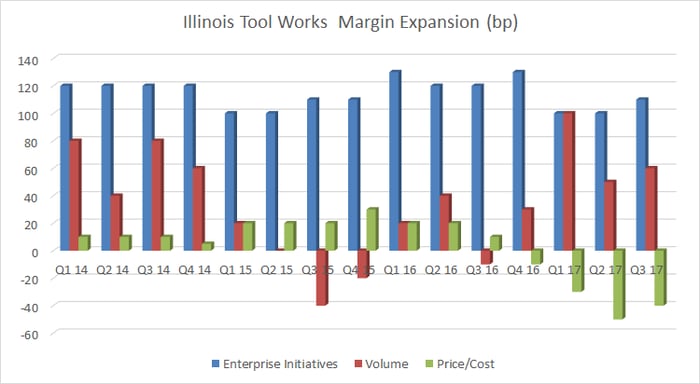 Third, margin expansion in 2017 came despite negative movements in what management calls price/cost. This is a similar situation to 3M Company and other industrial companies. In a nutshell, improvements in end demand from an improving industrial economy have led to good volume growth, but increasing raw material costs and a moderate pricing environment have pressured margin expansion.

A reason to be cheerful

On the other hand, betting against its management has not been a good idea in recent years. The company continues to beat expectations with its earnings and the 2012-2017 plan was executed in the face of some difficult end market conditions.

The company expects revenue growth in every one of its segments to be better in 2018, and, as you can see below, management plans for long-term growth to exceed its end markets across the board.

Again, it's useful to make a comparison with 3M Company because Illinois Tool Works appears to be making progress in all its segments while 3M's consumer segment had a lackluster 2017. Moreover, 3M's CFO Nick Gangestad isn't expecting much of a pricing improvement until the latter half of 2018.

What to make of it all

The investment decision boils down to a risk/reward calculation and the risk outweighs the potential reward. The stock is undoubtedly expensive on a historical basis, and stocks like 3M Company and Illinois Tool Works need a combination of ongoing economic growth and execution in order to grow into their valuations. Any kind of slowdown will leave the stock exposed, particularly if its accompanied by ongoing margin pressure from rising costs.