Shares of Office Depot (NASDAQ:ODP) continued to struggle last year, as the office-supply retailer searched for a way to the future after regulators blocked its proposed merger with Staples in 2016. While the company is still profitable, investors see dim prospects for selling supplies such as paper and printers, putting pressure on the stock. According to data from S&P Global Market Intelligence, the stock finished the year down 22%.

Office Depot gained through the first half of the year but then fell sharply on two weak earnings reports and a questionable acquisition. 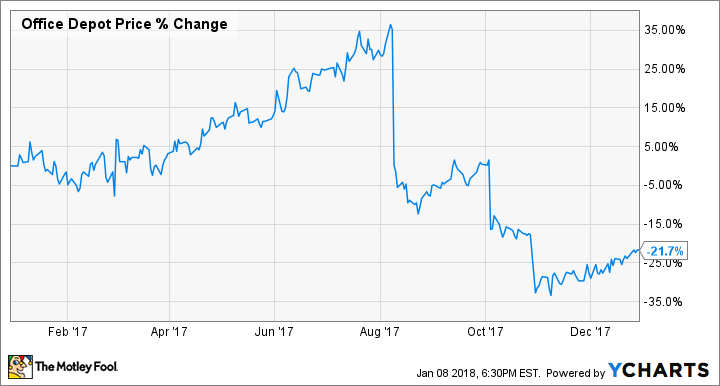 The retailer's worst day of the year came on Aug. 9, when the stock tumbled 26% after  second-quarter earnings came out. The company said comparable sales declined 6% and overall revenue fell 9% to $2.36 billion, missing expectations at $2.44 billion, as it continued to shutter stores. Adjusted earnings per share were flat from a year ago at $0.06 and also came in below estimates at $0.08. What may have really sunk the stock, however, is that management, on the earnings call, acknowledged the threat from Amazon.com.  It would be far from the first time Amazon has caused a retailer's stock to nosedive. 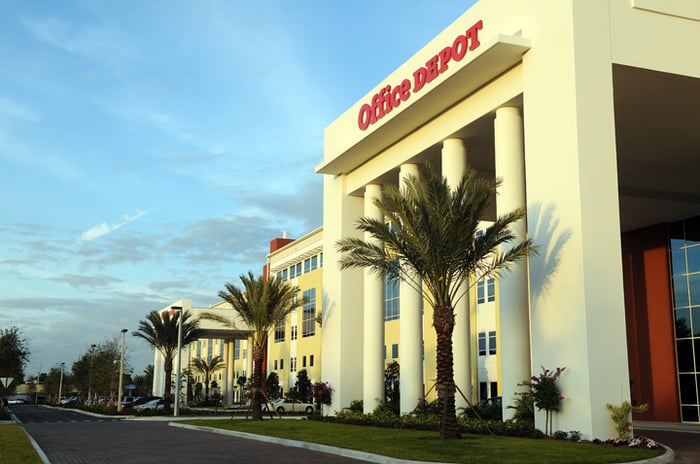 A couple of months later, Office Depot stock fell again, losing 22% on Oct. 4 after the company updated its third quarter and announced the acquisition of CompuCom, an information technology services provider, for $1.1 billion. While the deal seems like a smart move for Office Depot, the stock fell as the company lowered its full-year operating income forecast from $500 million to a range of $400 million to $425 million.

Then later that month, the stock briefly dipped below $3 on an analyst downgrade. JPMorgan Chase said competition among Staples and Amazon for business customers is intensifying and that the overall office-supply category is shrinking.

Going into 2018, the company's ability to integrate CompuCom may best determine its fate, as management expects to bring in an additional $1 billion in revenue and generate $40 million in synergies over the next two years from the deal. While it seems easy to dismiss the office-supply retailer, don't count Office Depot out. After all, Staples got bought out at a healthy premium near 20% by Sycamore Partners, and the business services segment continues to be lucrative. You can expect comparable sales to continue to decline, but investors should focus on the business service side and the CompuCom acquisition. If management can execute on those two accounts, the stock could bounce back.