The management at Intuitive Surgical (NASDAQ:ISRG) -- maker of the daVinci robotic surgical system -- pre-released fourth quarter earnings at the JPMorgan Healthcare Conference today, and the market is very excited about what it's seeing.

Not only did Intuitive blow past its own benchmarks laid out at the beginning of 2017, but it looks as if 2018 could be just as promising for shareholders. 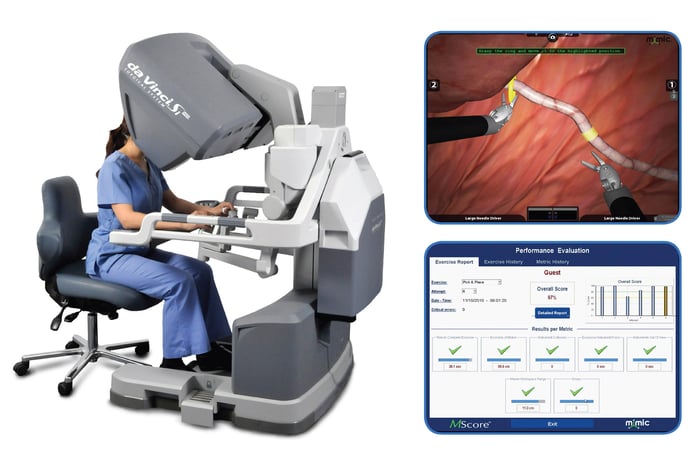 Before I dive into all of the details, it's important to highlight the headline numbers from the company's release. While earnings figures will be released on January 25th when the official conference call is held, management said it expects revenue to come in at $892 million, an 18% jump from the same time last year.

It's important to breakdown where all of that growth came from.

There are two big surprises here. The first is the large jump in systems revenue. Intuitive announced that it sold 216 daVinci systems during the quarter, up 33% from the same time last year. That brings the total installed base to roughly 4,400 systems worldwide.

While system placements in Asia were somewhat weak -- up just 13% to 34 total -- this was likely due to continued constraints via quotas from the Chinese government on allowable system sales.

Outside of Asia, however, sales were booming. Within the United States, daVinci purchases were up 30% to 130, and European hospitals bought 81% more surgical robots in the fourth quarter, for a total of 47. That strength internationally is important because -- as you'll see below -- international procedure growth is one of the two growth catalysts for the company moving forward.

The second surprising aspect of the revenue was 18% growth in instruments and accessories. Because Intuitive Surgical relies on a razors-and-blades model -- with systems being sold at low margins while consumables are recurring and have higher margins -- this category tends to track almost identically to procedure growth.

When 2017 began, management provided a forecast of 9% to 12% growth. But the year ended with much better results: 18% growth in the fourth quarter, and 17% growth for the full year.  Management said this, "was primarily driven by the growth in U.S. general surgery procedures and worldwide urologic procedures."

Here's what the procedure trends have looked like over the past five years. 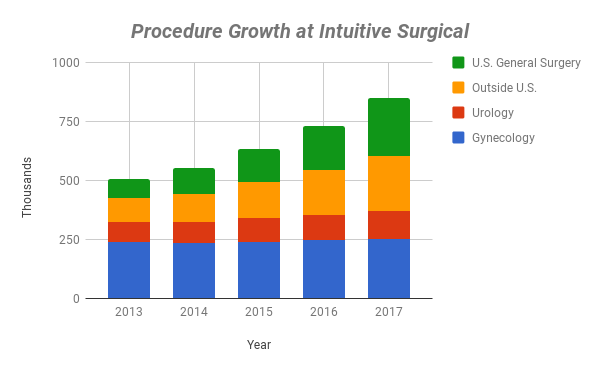 Data source: SEC filings. Does not include "Other" procedures, accounting for roughly 3% of all worldwide procedures

To put this in perspective, General Surgery and international (Outside U.S.) procedures combined have accounted for 87% of all growth since 2013, with urology and gynecological procedures providing a solid base from which to grow.

That's one reason why investors should be heartened by such a large increase in the installed base internationally over the fourth quarter. We'll have to wait to hear more commentary on the conference call from management, but it will also be interesting to see how much of the growth in General Surgery was attributable to hernia operations, and whether or not there are other procedures (colorectal, thoracic) that management sees as providing further opportunities for growth.

Management, led by CEO Dr. Gary Guthart, has done a great job of managing investor expectations over the years -- continually under-promising and over-delivering on the procedure growth front.

That's why the forecast for 2018 -- of procedure growth coming in between 11% and 15% -- likely has the market excited. It wouldn't be outside the realm of possibility to see that figure touching 20% at some point throughout the next year.

Additionally, the company also announced that it had submitted paperwork to the FDA for a highly anticipated Single Port surgical system to be used in urology procedures. Shareholders should listen closely for details on how this could affect both system sales and procedure growth during the company's conference call.

All in all, investors should enjoy the share-price jump today, and pay attention when January 25th rolls around to get more details on what to expect in the year ahead.