Shares of PayPal Holdings Inc. (NASDAQ:PYPL) spiked 86.5% in 2017, according to data provided by S&P Global Market Intelligence. The online payments processor outpaced analysts' consensus earnings estimates in the first three quarters of the year and continued to increase the amount of transactions on its platform.

Investors started pushing up PayPal's shares at the end of April, after the company reported its first quarter 2017 results. The company managed to grow revenue by 17% year over year, to $2.97 billion, and non-GAAP earnings per share ticked up by 6% to $0.44 -- analysts were expecting just $0.41. 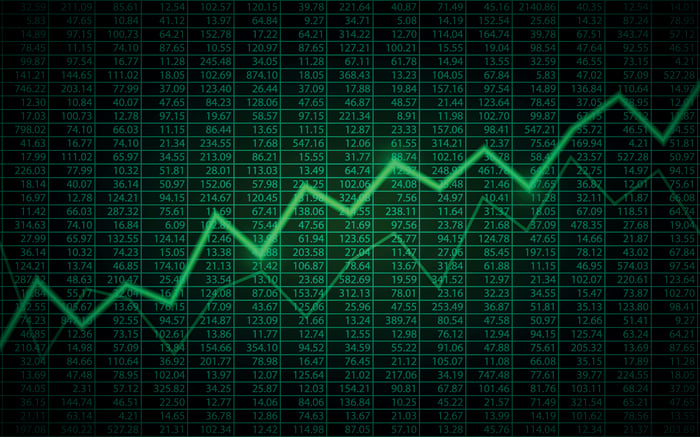 The company's shares continued to trend up for almost the entire rest of the year, except for a slight decline in December after PayPal announced some details about the suspension of a company it owns, called TIO Networks, because of a data breach at the company. Shares rebounded later in the month though.

Overall, PayPal beat analysts' consensus earnings estimates for all three 2017 quarters that were reported in the year and one of the biggest share price jumps -- 13.3% -- came in the month of October after the company reported strong third quarter sales growth of 21.3% and adjusted net income growth of 31%, both on a year over year basis. The processor of online and mobile payments also grew its payment transactions by 26% in the quarter, thanks in part to a 54% jump in mobile payments.

PayPal's share price has ticked up nearly 7% since the beginning of the year (as of this writing) as investors continue to be optimistic about the company's future. PayPal's management expects sales to grow between 20% and 22% in the fourth quarter and non-GAAP earnings to be in the range of $0.50 and $0.52, which is in line with analysts' consensus earnings estimates. Additionally, the company believes it will add 30 million customers in the fiscal year 2017, up from previous expectations of 25 million -- all of which means that the company is starting 2018 on a high note.