Shares of Italian-American automaker Fiat Chrysler Automobiles (NYSE:FCAU) opened 2018 with a bang: The stock is up almost 20% so far this year, with much of that appreciation coming in the first three trading days of 2018.

The run-up came out of the blue. FCA's stock didn't do much at all in December -- but as soon as the calendar turned, its price jumped. 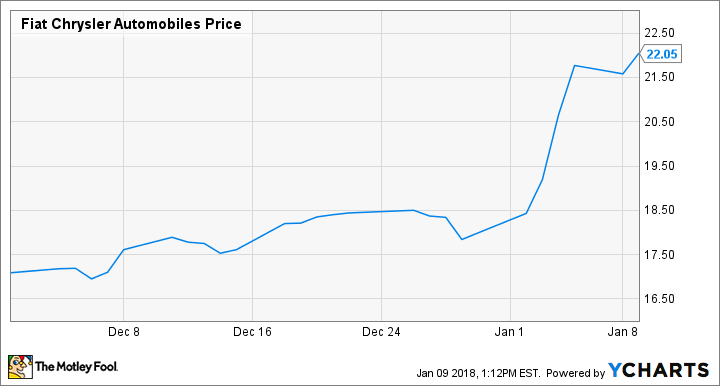 What's the story? There wasn't an obvious catalyst for the run-up -- in fact, the biggest news in the first few days of the year was that FCA's U.S. sales fell 11% in December. But as 2018 opens, some investors are expecting FCA's recent production shuffle to begin bearing fruit -- and anticipating further corporate moves in what is likely CEO Sergio Marchionne's last year before retirement.

Some costly investments could start paying off in 2018

First, I think analysts have been setting their expectations for FCA in 2018, and noting that a series of costly production shuffles in North America are likely to begin paying off this year.

Simply put, FCA has been retooling several of its North American factories to boost production of high-profit pickups and SUVs. That effort started in early 2016, when Marchionne announced that the company would end production of its two mass-market sedans, the Dodge Dart and Chrysler 200, and revamp the cars' assembly lines to increase production of its more profitable products. 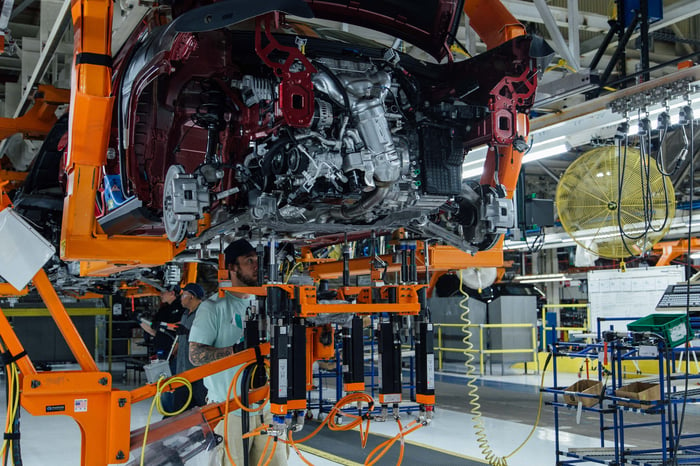 That kicked off an elaborate reshuffling, in which production of several FCA products was shifted between factories to maximize output of hot-selling models (and launch a few new ones):

Got all that? Here's the key takeaway: With Cherokee production up and running in its new (larger) home, the all-new Wrangler entering production, and an all-new Ram set to launch within a few months, analysts are quite reasonably expecting FCA's profits to jump in 2018.

But there might be more drastic moves in store for FCA in 2018.

The all-new 2018 Jeep Wrangler should give the Jeep brand -- and FCA's bottom line -- a boost over the next few quarters. Image source: Fiat Chrysler Automobiles.

The other factor: FCA's unpredictable CEO

CEO Sergio Marchionne's tenure has been nothing if not eventful. Under Marchionne, FCA has made a series of dramatic moves in an effort to deliver value to its shareholders:

Not all of those moves have panned out quite the way investors hoped (in particular, the jury is still very definitely out on the success of the Alfa Romeo effort). But the trend has gone in the right direction: FCA's share price rose just over 200% over the five years that ended on Dec. 31, 2017, handily outpacing both Ford Motor Company and General Motors over the same period. 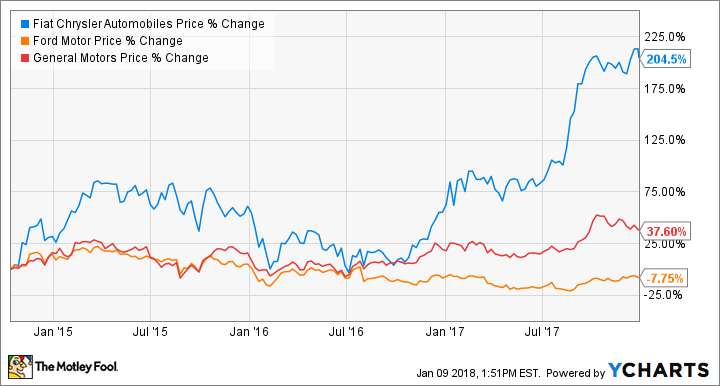 And now FCA's shares are up another 20% in 2018. Investor expectations around the production shuffles are clearly a factor, but I think another part of the reason is that investors might be expecting a few more dramatic moves before Marchionne retires next year.

What might those moves look like? It's possible that Marchionne has something drastic up his sleeve, like a sale of all or part (or multiple parts) of FCA to other automakers.

It's also possible that he doesn't (or that he won't be able to find buyers even if he tries), and that 2018 will be a relatively uneventful year for FCA by recent standards. But even if that's how it pans out, the production overhaul (and the new trucks and SUVs) should give FCA's profits a nice boost in 2018 -- as long as the market remains strong.