Don't look now, but Rite Aid Corporation (NYSE:RAD) stock is actually beating the S&P 500 index so far in 2018. Of course, it's way too early to get overly excited. After all, we're less than two weeks into the near year. Still, though, any good news is welcome for Rite Aid after losing three-fourths of its market cap in 2017.

Rite Aid CEO John Standley, COO Kermit Crawford, and CFO Darren Karst spoke at the annual J. P. Morgan Healthcare Conference in San Francisco on Wednesday. Their primary message was that there is now a "new Rite Aid" as a result of the company selling 1,932 stores to Walgreens Boots Alliance (NASDAQ:WBA). It wasn't hard to identify some positives in their presentation. Here are five that could help explain why Rite Aid stock has gotten off to a pretty good start in 2018. 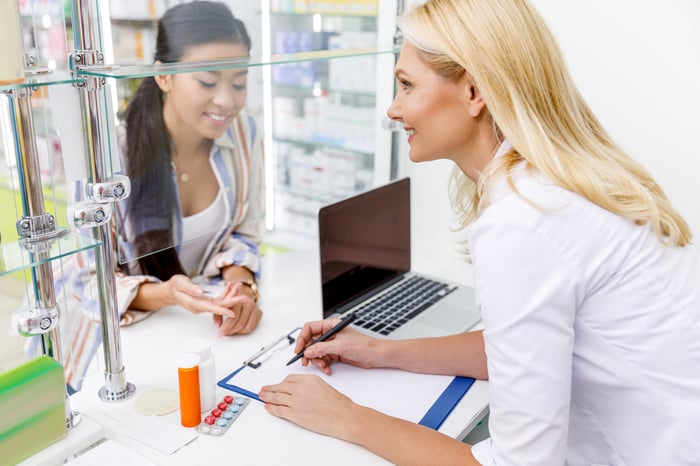 Bigger isn't always better. For Rite Aid, the company could even be more competitive when the sale of stores to Walgreens is completed.

John Standley noted that Rite Aid's new footprint includes 2,569 stores in 19 states, clustered primarily along the east and west coasts of the U.S. He said that in four of those states -- Pennsylvania, Michigan, Ohio, and Oregon -- over half of Rite Aid's remaining stores rank first in their respective markets. In California, New York, and Washington state, at least 40% of the company's stores rank either first or second in their markets.

Rite Aid's remaining stores also generate more front-end store sales and pharmacy sales on average than the company did prior to the asset sales to Walgreens. In addition, Standley said that over 63% of Rite Aid's current store portfolio have been remodeled to support the company's wellness focus. Results for wellness stores tend to outperform those stores that haven't been remodeled.

One of the biggest concerns for Rite Aid in the past was its crushing debt load. Standley pointed out that the proceeds from the sale of the stores to Walgreens are being deployed to debt reduction, resulting in Rite Aid's leverage ratio dropping from 7.6 as of Dec. 2, 2017 to 4.6 when the transition of stores is finalized. The company's debt will decline from $6.7 billion to a more manageable $2.9 billion.

Darren Karst provided more good news about Rite Aid's debt. Currently, much of the company's debt reaches maturity in 2020. However, along with paying down a big chunk of the debt, Rite Aid is also restructuring its debt to give it a more attractive maturity profile, with the earliest notes reaching maturity in 2023.

Kermit Crawford, who joined Rite Aid as COO in September after a long career with Walgreens, gave an encouraging update about Rite Aid's Wellness+ customer loyalty program. He said that the loyalty program had 20.7 million active members as of the end of 2017.

Crawford noted that 79% of the company's front-end sales and 57% of pharmacy sales stemmed from loyalty program members last year. That's good news for Rite Aid, since the average basket size for loyalty program customers is 7.1% higher than that of customers who aren't members of the program.

Although Rite Aid's size will be much smaller after the transition of stores to Walgreens, the company should still enjoy pricing power for generic drugs. As part of the agreement with Walgreens, Rite Aid has an option to participate in the company's purchasing network for 10 years.

However, Crawford said that exercising that option isn't a foregone conclusion. He stated that Rite Aid is conducting an RFP (request for proposal) process in an effort to get the lowest possible drug pricing prior to exercising the option with Walgreens Boots Alliance. Rite Aid's current contract with McKesson expires in March 2019, while the Walgreens option expires in May 2019. Regardless of what happens, lower generic purchase prices could be on the way, which should help boost profitability for Rite Aid.

There was also a positive update for EnvisionRx. Crawford shared that Rite Aid projects 600,000 Medicare Part D members for EnvisionRx by the end of 2018. That's a 52% increase over 2017. He suggested that this growth could also benefit Rite Aid by steering more customers to its stores.

Rite Aid reported its fiscal 2018 third-quarter earnings last week. Most of the information presented at the J. P. Morgan conference was already available. I suspect that the positives helped build some confidence among investors in the first several days of 2018 that the worst was behind Rite Aid.

But is all of it enough? I'm not sure. My view has been that Rite Aid's best option was to be acquired, potentially by a private-equity firm. While Rite Aid has gotten off to a good start in the new year, there's a long way to go. It's possible that the stock could be a major comeback story of 2018. We'll see.