In 2018, Ford Motor Company (NYSE:F) is expected to launch new products, including the long-awaited return of the midsize Ranger pickup; introduce some changes to the current product line; and make more big-picture future-tech moves as CEO Jim Hackett clarifies his vision for Ford as a high-tech provider of personal mobility.

What does all that mean for long-suffering Ford investors? Here's what we know is coming, what I think is coming, and what's likely for Ford as 2018 unfolds.

The big news: The return of the Ranger

Ford confirmed the rumors a year ago: The Ranger pickup, discontinued in the U.S. in 2011, will return to Ford's U.S. lineup as a 2019 model. Ford is expected to show it soon -- possibly as soon as this weekend -- and it'll go into production in Michigan before the end of the year.

The new-to-the-U.S. Ranger would likely be an overhauled version of the Ranger that Ford has sold in a number of international markets since the U.S. version was discontinued. That's not a bad thing at all: The current Ranger gets rave reviews in places like Australia as a rugged, capable off-roader. The current Ranger that Ford sells in many international markets is well-regarded for its off-road ability. Expect the new U.S. Ranger to be a revamped version of this one. Image source: Ford Motor Company.

That's a clue as to how Ford will market the new Ranger in the United States. For most of its life, the old Ranger was a fairly bare-bones truck -- but the new one is likely to be positioned as a "lifestyle vehicle," a rival to General Motors' (NYSE:GM) GMC Canyon and Fiat Chrysler Automobiles' (NYSE:FCAU) Jeep Wrangler.

Expect the U.S. version of the Ranger to build on the current model's off-road abilities while adding creature comforts and refinement. A high-performance Ranger Raptor is on the way, too.

(A Ranger rivaling the Wrangler? Yep, and vice versa: FCA will soon launch a Wrangler-based pickup -- and the Ranger will be followed in another year by an all-new Bronco, which is expected to be a more direct Wrangler competitor.)

The new Ranger is expected to go into production this fall at Ford's Michigan Assembly Plant, near Detroit.

An overhauled Edge and a renamed Lincoln

Ford is also revamping its midsize SUVs in 2018. The five-passenger Ford Edge is getting a light facelift, some new technology, and -- for the first time -- a high-performance version: The new Edge ST gets a revamped sport suspension, a new 8-speed automatic transmission, and a 335-horsepower version of Ford's well-regarded 2.7-liter twin-turbo EcoBoost V6.

The Edge's upscale sibling, the Lincoln MKX, is also getting an update, starting with its name. From the 2019 model on, it'll be known as the Lincoln Nautilus.

Both the Nautilus and the revamped Edge are expected to arrive in U.S. showrooms this summer. 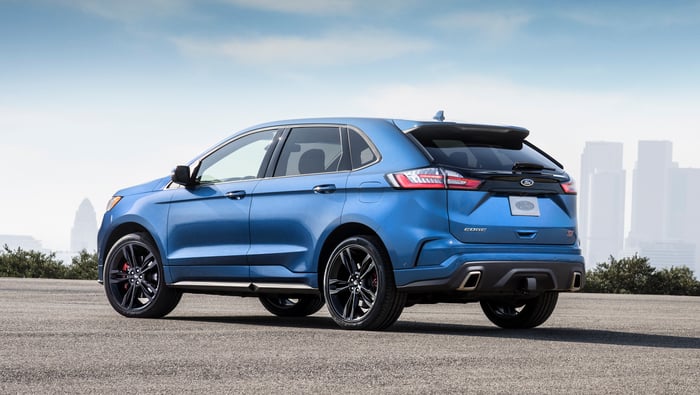 There's another new Ford in the works

There have been reports that Ford is working on an all-new crossover SUV, a compact model (think Focus-sized) that will slot into Ford's lineup between the small EcoSport and the Escape. It'll essentially replace the C-Max, the hybrid that Ford has built in Michigan for the last few years. (C-Max production will end in a few months as Ford revamps that factory to make the Ranger.)

This new Ford crossover will almost certainly be made in Mexico. But will we see it in 2018? It's very possible -- but it's also possible that it won't debut until next year.

What about that all-new Bronco?

Ford has said that an all-new truck-based SUV called the Bronco will go into production late in 2019 at the same Michigan factory that will build the Ranger. But will we see the hotly anticipated new Bronco in 2018?

It's possible -- Ford previewed the most recent redesigns of the Edge and F-150 with "concept" vehicles a year before the production versions were shown. It could choose to do the same with the Bronco, showing a concept version sometime in the next few months. (It could happen as soon as next week, at the North American International Auto Show, in Detroit.)

But I won't be surprised if Ford decides to keep the Bronco completely under wraps for another year, until the North American International Auto Show in January 2019, so as to keep the spotlight on the Ranger until its launch this fall.

2017 was a year of transition for Ford. The Blue Oval got a new CEO, Jim Hackett, in May -- and the company's senior-management structure was completely overhauled in the weeks that followed.

In his first months as CEO, Hackett presented some big ideas for Ford's future. I think that 2018 will be the year in which some of those ideas start to turn into concrete efforts in ways that customers and shareholders can see.

What does that mean? Think connected cars, electric drivetrains, self-driving vehicles, and new models of urban mobility: Ford will almost certainly have some new things to show on all of those fronts in 2018.

Will 2018 be a good year for Ford investors?

As of this writing, Ford hasn't yet given guidance for 2018. (It will -- sometime between now and the end of January.) A year ago, Ford warned that its pre-tax profit was likely to dip in 2017 -- but said that profit would rise in 2018, possibly to new highs. 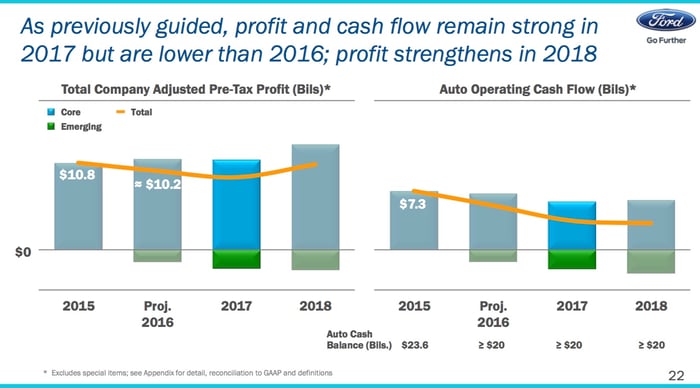 The first part of that prediction came true, at least through the first three quarters of 2017. But Ford has been through some big changes since that guidance was issued last January, including a new CEO who may have different expectations.

So what should investors expect for Ford in 2018? I think that as long as the U.S. market stays fairly strong, there's a strong chance for Ford to post a good profit for the year. But we'll have a better idea after we hear Ford's official guidance.