Most electric vehicle chargers to date have been geared toward either the home or quick charging customer. Tesla's (NASDAQ:TSLA) Supercharger network is the most notable of the quick chargers around the world, but networks from Aerovironment (NASDAQ:AVAV), NRG Energy, ChargePoint, and others have popped up as well. And there are a dozen chargers customers can choose for the home.

One underserved market is the commercial and multi-unit residential market, where customers are now generally using expensive chargers meant for larger applications or smaller chargers meant for the home. Aerovironment is trying to bridge that gap with its newly announced TurboDX charging solution geared toward commercial spaces and residences with multiple units. 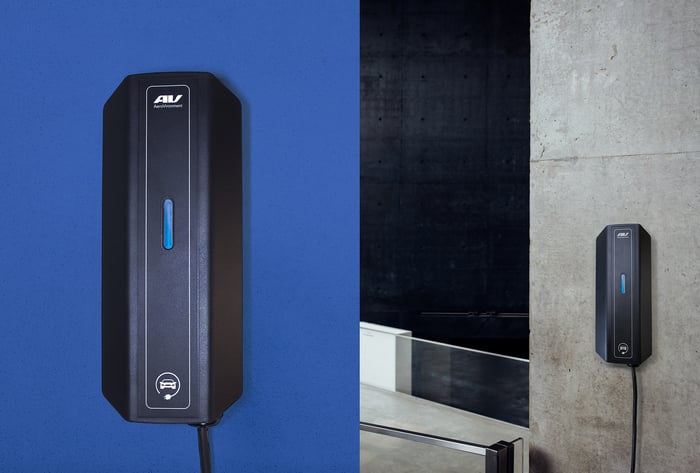 TurboDX is a 240-volt EV charger that comes in 16 and 32 amp configurations. The charger can have up to four chargers connected at a time and is expandable, which could be useful in commercial buildings and apartment or condo complexes.

What's unique about this charger is its control systems, which allow for the charger owner to allow access to the charger in an open network or through bluetooth-enabled access control. This ensures that only verified users can use the charger, and also allows data to flow to the charger network an owner uses. You can think of it as a charger with the capability of a commercial charger but the ease of use of one in your home.

While TurboDX may be built for commercial or large residential spaces, it's also small enough and low-cost enough to be a viable home charging product. It starts at $469, and Aerovironment says it will do OEM branding for some, or all, of its nine auto manufacturing partners beginning in early 2018.

A unique niche in EVs

The charger has become a great niche product for Aerovironment because of the company's ability to manufacture it at scale and provide branded products to automakers. There's enough engineering effort being put into developing EVs that developing a charger isn't necessarily something each automaker wants to do on their own.

Tesla is a unique example of an automaker that is developing chargers and a charging network on its own, but others are more likely to leverage the scale of working together rather than build a dozen disparate charging networks around the country.

Another growth market for Aerovironment

EV chargers is the smaller of Aerovironment's two businesses, accounting for about 15% of sales, with drones composing the rest. But it's an important business, and it's growing rapidly as EVs are adopted more widely.

From an investment standpoint, I think Aerovironment's strong position in the charging market is an underappreciated reason to own the stock. That's why I'm adding a thumb up call on My CAPS page, betting the stock will outperform the market long-term.