Is Kroger (NYSE:KR) having an identity crisis? First, it announced it was going to add an apparel aisle to its grocery stores. Now, it wants to start selling shovels alongside the bananas. The supermarket giant is reportedly in talks for a partnership that would allow Ace Hardware to open up mini-shops inside its stores.

Cutting into its business

Kroger has about 2,800 stores nationwide, but has been struggling to reverse a sudden drop in sales. Last year's first quarter was the first time in 13 years that it had recorded a drop in comparable-store sales, although it was able to bounce back in late November, posting a 1% increase. 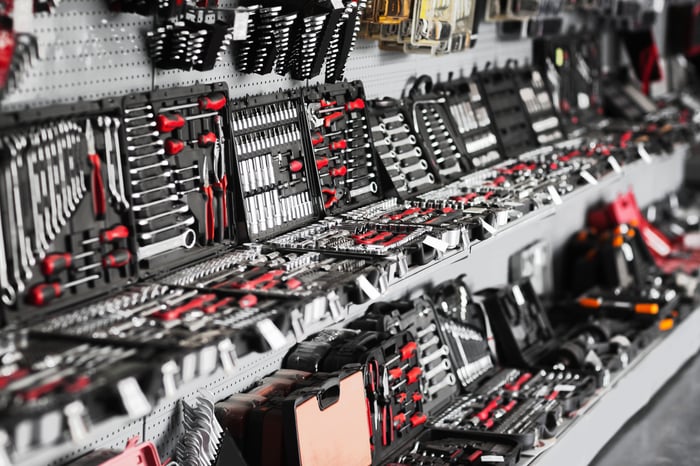 Investors, however, have been leery of the price-cutting initiative Kroger announced last year to remain competitive with not only Walmart and Amazon.com, which acquired Whole Foods Market, but also deep discounters like Aldi, Lidl, and the dollar-store chains that have been adding more fresh produce and expanding the number of refrigerator and freezer cases in their stores.

Cutting prices, however, was just one among a wide-ranging set of strategies the supermarket chain laid out in its Restock Kroger program -- a plan to reimagine the grocer for the future, and boost sales and profits. Another aspect revealed in the announcement was that it would be adding its own clothing line to the mix.

An ace up its sleeve?

Beginning with its Fred Meyer chain and Kroger Marketplace stores, the country's largest supermarket chain will start selling its own private label clothes. While apparel carries higher profit margins than groceries, there are a number of problems with the strategy: It's not an underserved niche, the established players are reeling and in trouble, and it risks confusing the brand in the mind of consumers. So imagine what adding tools, paint, and screws will make them think.

The stores-within-a-store format that TheStreet reports Ace is mulling with Kroger is actually nothing new for the hardware chain. It operates over 5,800 standard stores in the U.S., but also has some 400 small-format "Express" stores, some of which are stand-alone locations and some housed within other retailers such as paint specialist Benjamin Moore.

Though the opportunity would obviously be beneficial for Ace, which continues to operate in the shadow of Home Depot and Lowe's, its potential impact for Kroger is not quite so clear.

Again, like the clothing line, this move would muddle Kroger's brand identity. Is it a supermarket, or is it trying to transform itself into a department store? It certainly appears it's taking tentative steps in that direction, and though Walmart and Target do offer differentiated shopping experiences, such as what Kroger seems to want to achieve, it doesn't necessarily follow that the grocer should emulate them.

Moreover, to add an Ace Hardware boutique, it will have to take space away from groceries. And it would presumably be sharing revenues and profits with Ace for sales made, which means it will be losing sales from products that are making it profits, and adding items liable to offer it less of them.

Wall Street analysts seem jazzed by these kinds of mashups in the wake of Amazon's acquisition of Whole Foods. The buzz-phrase "experiential shopping" is now thrown around as if it's a magical elixir for retail, but there's no proof that diluting Kroger's preeminence as the leading supermarket chain by offering customers a hodge-podge of other products will benefit it, or its investors.