Shares of Salesforce (CRM 7.44%) are surging again after the company told analysts it plans to grow to $60 billion in revenue from just $10 billion. At that size, Salesforce would be over 50% bigger than Oracle (ORCL 4.54%), a one-time investor and now chief sales rival. 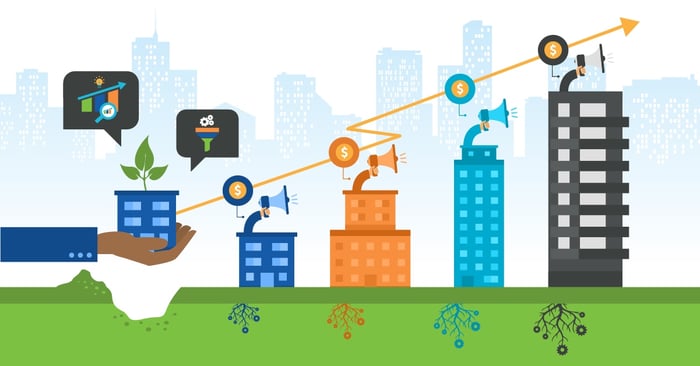 A history of one-upmanship

Longtime followers of Salesforce will remember that CEO and co-founder Marc Benioff worked at Oracle at one time. Oracle co-founder Larry Ellison wisely invested in Benioff and his upstart company early on. For years, the companies were friendly. But in 2011, Ellison canceled Benioff's scheduled keynote at the annual Oracle OpenWorld conference the day before it was to occur. The two have been rivals ever since, and now Benioff and team are saying they're on track to grow revenues sixfold in 16 years.

Before you commence with eye-rolling, look at the photo below and consider that, for the last two years, Salesforce has drawn over 171,000 attendees to its annual Dreamforce conference. Oracle's OpenWorld -- the same conference where Benioff was snubbed seven years ago -- drew 60,000 in October. 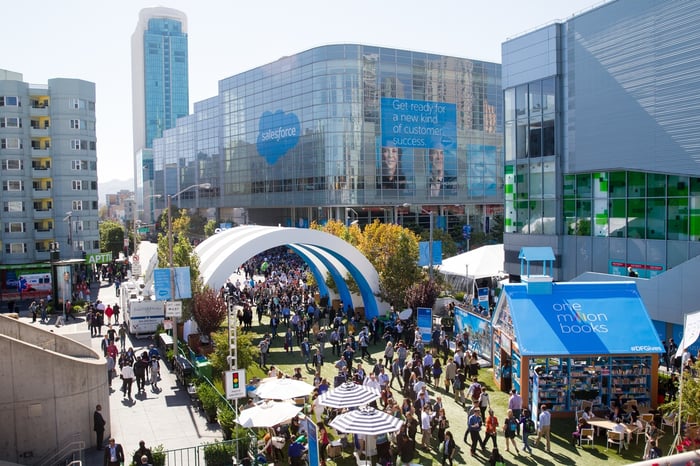 Salesforce is attracting a crowd to its products and its stock. Image source: Salesforce.

Developers go where the money is, and there's a lot of money invested in Salesforce

I know, conference attendance isn't exactly a perfect indicator, and Oracle still is nearly four times bigger than Salesforce today. But what about tomorrow? At the time of the snub, Oracle generated $35.622 billion in revenue in the fiscal year ended in May 2011. Salesforce sold just $1.657 billion worth of product in the fiscal year ended four months earlier, in January 2011.

In other words, at the time of Benioff's snub, Oracle was over 20 times larger than Salesforce. That gap is now less than four times. Is it really so crazy to think Salesforce will be the bigger company in a few years? I don't think so.

Meanwhile, what the attendance figures tell me is that a lot of corporate developers -- trained coders who customize environments like Salesforce for the companies for which they work -- are interested in what Salesforce has to offer. Fewer of them are interested in what Oracle has to offer. Over time, that's likely to mean more licenses and revenue headed Salesforce's way, and the company already has $15.9 billion in booked business as of this writing.

Targeting $60 billion in annual sales by 2034 probably isn't much of a stretch. What surprises me is that no one's talking about how Salesforce is admitting that its growth is about to slow by 80%. That's right, 80%. Here's why: 16 years to six times growth is 11.8% annualized. Salesforce grew 58.3% annualized in the 16 years prior.

You know what? Good. Because if Salesforce makes good, it'll become one of the world's dominant suppliers of business software. Growth slows when you become dominant because there are fewer customers to sell to -- you've already cornered the market. That's what Ellison did at Oracle. No one should be surprised to see Benioff, his one-time protege, achieve the same at Salesforce.