Please ensure Javascript is enabled for purposes of website accessibility
Log In Help Join The Motley Fool
Free Article Join Over 1 Million Premium Members And Get More In-Depth Stock Guidance and Research
By Danny Vena - Jan 15, 2018 at 9:06AM

Early last week, shares of Netflix Inc. (NFLX 3.55%) jumped on word of multiple analysts' upgrades. While serious investors don't normally make their buy and sell decisions based on these random upgrades and downgrades themselves, it can be informative to look at the specific points detailed by the analysts to determine if they have any bearing on your investment thesis.

Tim Nollen and other analysts from Macquarie Research sent a note to clients upgrading Netflix shares to outperform from neutral (which is essentially increasing it to a buy rating from a hold), while raising his price target from $200 to $220. At the same time, Loop Capital Markets analyst David Miller reiterated his buy rating on the stock and called it his "best idea of 2018" while raising his price target from $237 to $240.

Let's look at their reasoning to see what caused them to make their bullish calls. 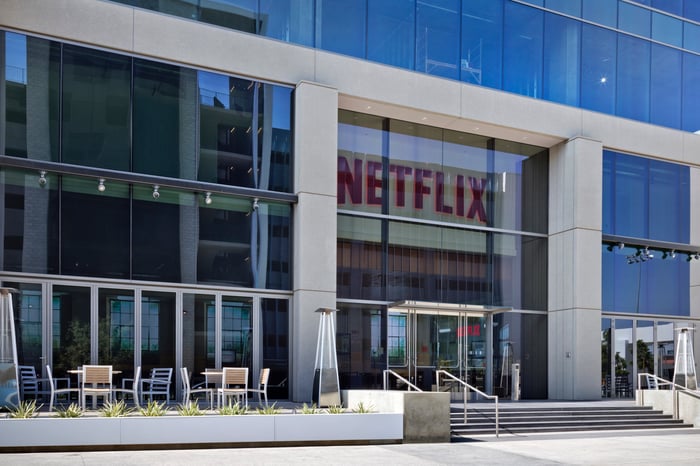 Nollen, lead analyst for Macquarie, cited subscription models as having greater opportunities than their ad-driven peers. "Consumers' increasing lack of tolerance for advertising drives them to subscription OTT (over-the-top television) services, and Netflix is miles ahead of peers," he said.

He also pointed to specific strengths for Netflix, saying it bested streaming competitors, "in terms of programming hours, original content quality and time spent, and we don't expect this to change. Netflix has won." (Emphasis mine.)

The strength of its original programming led Netflix to increase prices this year, one factor cited by Nollen and his team for the upgrade.

Netflix is working to expand its library of content around the globe, having found that members seek out the best content, even across language barriers. Netflix CEO Reed Hastings has cited Brazilian sci-fi hit 3% as an example, saying that the program has been well received in the U.S., Spain, and Germany.

In its 2017 second quarter, Netflix had a gain in streaming subscribers that far exceeded its forecast, adding 5.2 million new members compared to the 3.2 million it expected. In seeking to explain the discrepancy, Netflix said, "We underestimated the popularity of our strong slate of content which led to higher-than-expected acquisition across all major territories."

Miller thinks that 2018 will see a greater degree of operating leverage for the streaming pioneer than what it saw in 2017. Netflix has much of the infrastructure in place, allowing it to divide its fixed costs over a growing number of subscribers. This will eventually be true of its content expenditures as well, once the company has completed the build-out of its programming library. When Netflix owns the content it produces, each program ends up with a lower cost per customer -- currently over 100 million subscribers and growing. This combination of factors will allow the company to increase its operating margins and drop more to the bottom line.

"While last year's subscriber growth was notable, we expect to see true operating leverage out of Netflix this year, and we believe the company is poised to deliver that at a level well beyond what we witnessed in 2017," stated Miller in his report.

Owning its own content has other benefits. Nollen thinks Netflix will increase the percentage of original content from an estimated 25% in 2017 to 60% in 2020, saving the company $2 billion annually in licensing fees.

The most frequently cited bear argument against owning Netflix is the company's increasing negative free cash flow (FCF), as Nollen noted in his report. The company is spending all the cash it generates and billions more to finance its continued expansion into overseas markets. This global roll-out is capital intensive, as the company builds the content library for each country from the ground up. This requires spending heavily upfront, but produces greater subscriber growth down the road. Netflix acknowledged the conundrum in its July 2017 shareholder letter, saying:

"With our content strategy paying off in strong member, revenue and profit growth, we think it's wise to continue to invest. In continued success, we will deploy increased capital in content, particularly in owned originals, and, as we have said before, we expect to be FCF negative for many years."

Will this change anyone's mind?

I don't think the opinions of these analysts will change the minds of any die-hard believers -- on either side of the argument.