Amazon.com (NASDAQ:AMZN) and Alphabet's (NASDAQ:GOOG) (NASDAQ:GOOGL) Google already dominate the nascent connected home space with their smart speakers, but they may soon have some competition if recent media reports prove true.

Facebook (NASDAQ:FB) is reportedly working on a video chat device that's made especially for the home, which will be used to call and chat with other Facebook users and stream content from services like Netflix and Spotify, according to the news site Cheddar.

The device, called Portal, hasn't been confirmed by Facebook yet, but it is expected to be announced at the company's F8 Developer Conference in May and could go on sale in the second half of this year.

If Portal hits the market, it will be Facebook's biggest attempt to take on Amazon and Alphabet in the connected home space. 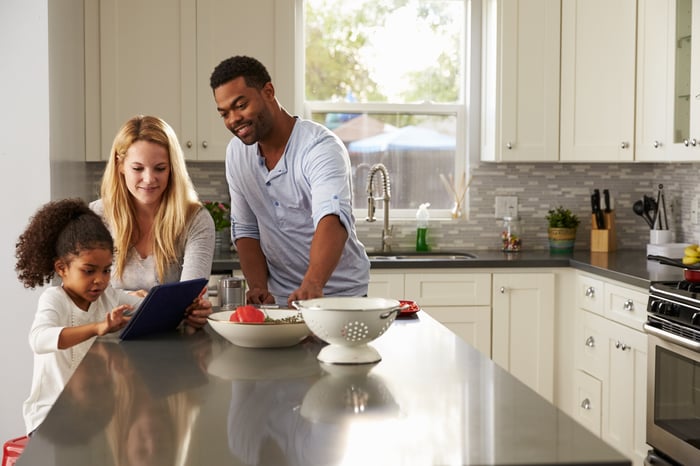 This isn't another smart speaker

Amazon's Echo speaker and the Google Home are smart speakers that have virtual assistants built into them, which can do things like order items online and also pair with other smart home devices (like thermostats) so users can adjust the temperature of their home with simple voice commands.

There's no indication that Facebook's Portal will have its own virtual assistant or that it will pair with other devices, but I'm including the device in the broader connected home space because it will be controlled with voice commands, like the Echo and Home, and because Portal is a way to get consumers to spend more time connected to Facebook's services (just as the Echo and Home are designed to get users to interact with Amazon's and Google's services).

The Portal is expected to go on sale for $499, though the report said that Facebook CEO Mark Zuckerberg isn't interested in making money from sales of the device and the company might lower the price if demand isn't strong enough. Portal is also expected to have facial recognition capabilities for connecting a user to their Facebook account and will come with a laptop-sized screen. If Facebook sticks to the initial price tag it'll be much steeper than the comparable Echo Show and Echo Spot, which both have viewing screens and forward-facing cameras for making calls to other Echo users, but sell for just $230 and $130, respectively.

Aside from competing with the Show and Dot, Portal will also compete with new video devices that are being released with Google Assistant built in. At the Consumer Electronics Show this month, Lenovo showed its Smart Display, which packs Google Assistant into a device with either an 8-inch or 10-inch display. The device is intended to be used to consume content and make video calls in homes, just like Portal, but will sell for $200 and $250 -- much cheaper than Portal's estimated price.

Of course, Facebook wants more from Portal than to just keep pace with Amazon and Google. The company makes its money by selling ads, and it's likely that Facebook could eventually make money from Portal by selling ads on the device.

A recent eMarketer report said that Facebook's U.S. display advertising market share will reach 39% this year, and that the ad growth is being fueled by video, "Video, both live and recorded, is a key driver of growing user engagement and advertiser enthusiasm," eMarketer's report said.

Zuckerberg made his thoughts on video very clear last February when he said on the company's fourth-quarter 2016 earnings call that, "I said before that I see video as a mega trend, on the same order as mobile. That's why we're going to keep putting video first, across our family of apps, and making it easier for people to capture and share video in new ways."

If Portal debuts in May, it'll certainly fit into into Zuckerberg's description of new ways to put video first. And with video ads now helping to boost the company's display ad market share, it appears that Facebook is forging its own unique path in the connected home space.