It was early 2015, and though I am extremely far from a banking expert, the narrative behind BofI Holdings (NYSE:AX) -- better known as Bank of the Internet -- was too enticing to ignore. With no real brick-and-mortar presence, the bank's lack of overhead costs could attract deposits with slightly higher interest rates than average.

But when I started digging, I found what is for me a disqualifying red flag. 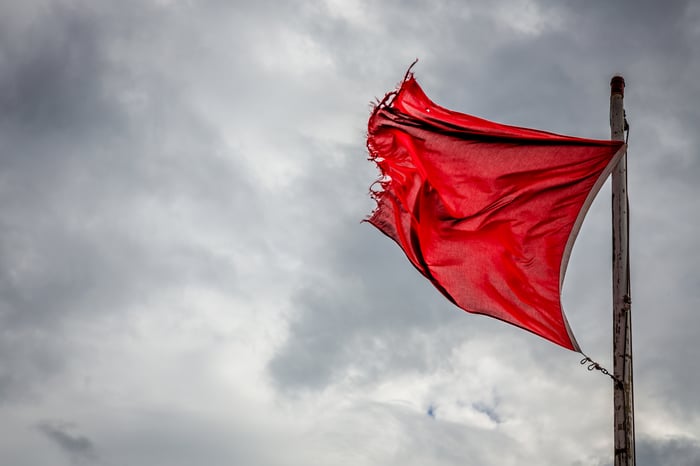 Is there evidence of wrong-doing? No. But there are many red flags. Image source: Getty Images

Employees -- current and former -- gave the company's culture and values a rating of 2.5 stars (out of 5.0), a very low score, on Glassdoor.com. That might sound like a small issue, but it forced me to view the situation through a new lens: Was this management I could trust?

Before unearthing my reasons for staying away from BofI, it's important to review all that has happened over the past two-plus years.

But -- and this is the part which cannot be emphasized enough -- for all of the claims flung at BofI, there is no smoking gun as of yet. The bank had to jump through regulatory hoops to acquire assets from H&R Block, and has likely been under further scrutiny  precisely because of all the accusations of wrong-doing. And as CEO Greg Garrabrants has consistently reminded us, no regulatory action has been taken against the bank.

At the same time, BofI has been functioning exceptionally well, a point highlighted by several writers here at the Motley Fool, some of whom own the stock in their own portfolio -- in other words, by folks I highly respect whose skin is firmly in the game.

Does this give you pause?

But here's the thing: I still find it hard to trust management, and much of this comes down to a few datapoints I've seen regarding its communication with naysayers.

For instance, when I published a piece on Garrabrants' response to Erhart's initial claims in 2015, I was surprised to find out that he had contacted The Motley Fool the next morning to question the veracity of the article. At the same time, I was heartened that this led to the scheduling of an interview later in the day between myself and the head of the company's Investor Relations. A time was set, the questions I wanted to ask were sent, and then...nothing.

It wasn't until more than an hour after the designated time had passed that I was informed the interview wouldn't be occurring for legal reasons.

I also read about how Garrabrants reportedly considered paying famed short-seller Marc Cohodes, "to help the bank...better understand how short sellers developed their opinions and how they shared their views," according to Roddy Boyd's retelling.

Cohodes first suggested the company focus solely on its own performance and ignore the short-sellers. But when BofI's lawyers came back asking for a rate to consult with Cohodes, he jokingly offered $15,000 per hour, with a three hour minimum. The lawyers asked if this was his final offer, at which Cohodes explained he wasn't interested.

When Garrabrants later criticized short-sellers on a conference call, Cohodes had a strong reaction on Twitter:

CEO of BOFI calls out "Internet Trolls" and yet you wants[sic] to "pay" me to "consult" to squeeze shorts? Not enough money on the Planet Greg.

When I consider there's no industry that can operate with hidden risk quite like banks (see: The Great Recession) -- and the concurrent fact that trust is paramount -- I simply cannot buy shares of the bank.

Why bring this up now?

Many who follow BofI closely will read this and ask: "So what? You've presented nothing new, why should I care?"

Those detractors are correct, there's little in here that may be new. But that doesn't mean there's nothing in here worth remembering.

It's important to remember that our goal here at The Motley Fool is, "to help the world invest -- better." That doesn't mean convincing you to avoid BofI altogether. It also doesn't mean telling you to back up the truck and buy all that you can.

Instead, it is a careful reminder: the stock has more than doubled since February of 2016. At the same time, the court proceedings involving Erhart and the Houston Municipal Employees Pension Systems have yet to be resolved. Those cases might be completely benign to BofI investors -- or they could create fear, uncertainty, and doubt that send shares reeling. If the latter comes to fruition, it's important to understand those risks now. If it doesn't, then you'll likely be able to enjoy solid returns on your hard-earned cash.

Either way, you need to enter such an investment -- as with all of them -- with eyes wide open.