Philip Morris International Inc.'s (NYSE:PM) stock finished in the black with shares of the multinational tobacco company rising 15.5% in 2017, according to data provided by S&P Global Market Intelligence. 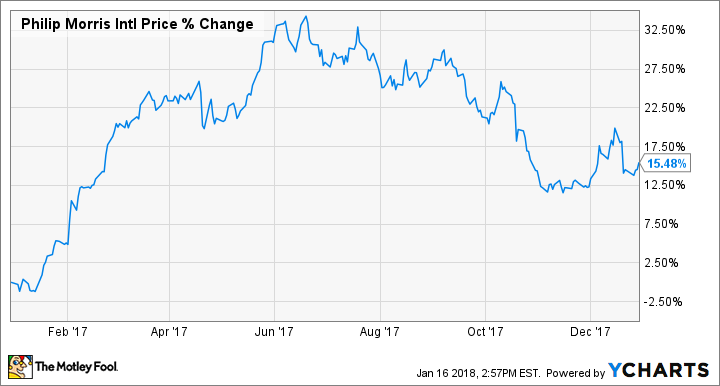 Approximately a decade ago, Philip Morris International (PMI) was spun off from Altria with the latter keeping Philip Morris USA. For shareholders, the reason given was that PMI would focus on high-growth areas, particularly fast-growing Asian and eastern European markets, while Altria would focus on margin improvement and dividends while muddling through a U.S. market fraught with declining cigarette volumes and increased legal risks. 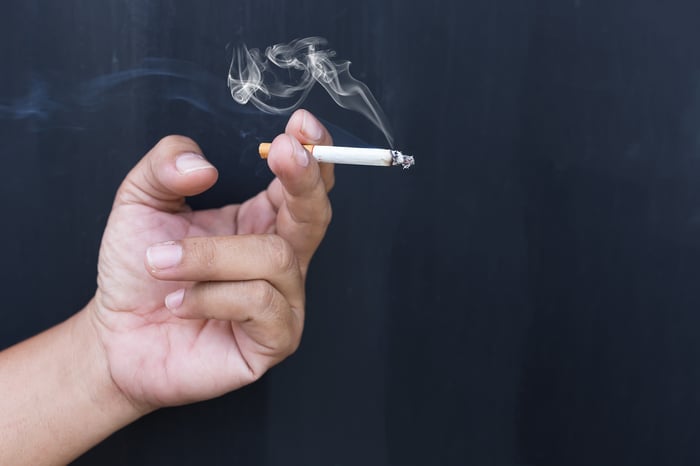 At the time, an analyst at Citigroup said, "We expect the beast to be unleashed and shareholders will be rewarded." While the analyst was referring to Philip Morris International, the real beast was the parent company: PMI's return of 107% roughly matched the S&P 500's while Altria has nearly doubled, both with a gain of 205%. The last five years have been notably disappointing on a relative basis as shares of PMI have advanced only 18% versus the greater S&P 500's return of approximately 90%.

It's a stretch to call present-day PMI a high-growth company. Through the first nine months of 2017 (the fourth quarter hasn't been reported yet), PMI recorded 1.3% higher revenue than in the prior-year period. While it's true revenue is an incomplete metric for PMI as its international-based sales strategy exposes the company to currency risk, particularly as the dollar strengthens, the company missed analyst expectations and lowered full-year guidance. Both of these are admissions the business environment may be worse than advertised. Cigarette volume, a more stable comparison than revenue, fell 7.6% on a year-on-year basis during the first nine months of 2017.

There is a potential catalyst that may propel PMI higher: e-cigs. As my colleague Rich Duprey notes, PMI is ahead of international competition in e-cig design and is stealing market share. However, it's unlikely e-cigs will offset volume declines in the immediate time frame (if ever) and investors should prepare for sluggish growth until it does.