Barnes & Noble's (NYSE:BKS) shares are already down about 20% in 2018, after the brick-and-mortar bookseller reported weak holiday sales. Total sales for the nine-week period ending Dec. 30 fell 6.4% to $953 million, driven by a 6.4% plunge in comparable store sales.

Even though Barnes & Noble's stock has shed more than half its value over the past year, more painful losses may lie ahead. Here's why. 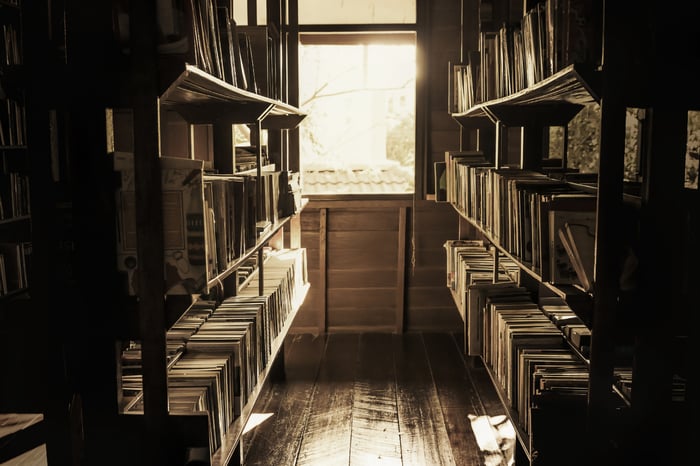 Limitless paper in a paperless world

And it's not just its reliance on paper books that are troublesome; Barnes & Noble sells a lot of other products that are fading in relevance. In fact, half of its same-store sales decline during the holiday period was due to falling sales of gifts, music, and DVDs.

This comes even as Barnes & Noble has had a bit of a reprieve in regard to printed book sales, which have rebounded somewhat in recent years, though they're still down more than 10% from a decade ago. But printed book sales are likely to remain under pressure over the long term, as more people become accustomed to reading on electronic devices, such as tablets and mobile phones. And even if printed book sales do exceed expectations, fewer people are going to physical bookstores to buy them. Instead, they're buying books online -- an area in which Barnes & Noble has struggled.

The staggering rise of e-commerce has disrupted a huge swath of the traditional retail industry. But while other retailers have recently found success by focusing more on their online operations, Barnes & Noble saw its e-commerce sales fall 4.5% in the crucial holiday season.

Barnes & Noble is besieged by an onslaught of competition, most notably from the juggernaut that is Amazon.com (NASDAQ:AMZN). People are joining Amazon's Prime membership program at record rates. In fact, more than four million people started Prime free trials or paid memberships in just one week alone during the holiday season.

Little hope of a rebound

After years of declining sales and dwindling profits, Barnes & Noble is in a precarious competitive and financial situation.

The Company said in a press release that it "remains focused on executing its strategic turnaround plan," which includes an "aggressive expense management program." But cost cuts can only go so far, and they're not going to help in regards to revenue generation.

However, it's dangerous for individual investors to speculate on the potential acquisition of a struggling business with deteriorating fundamentals. If a deal doesn't materialize, shareholders could suffer gruesome losses even from today's low prices. Thus, investors may be best served by selling their shares in Barnes & Noble.