Amgen (NASDAQ:AMGN) shareholders had to feel pretty good about 2017. The granddaddy of biotechs saw its stock price jump nearly 19%. With reinvested dividends, Amgen generated a total return of of more than 22% last year.

But investors know that you can't look in the rearview mirror for very long. The future is what's important. With Amgen's solid performance behind it, could 2018 be the company's best year yet? 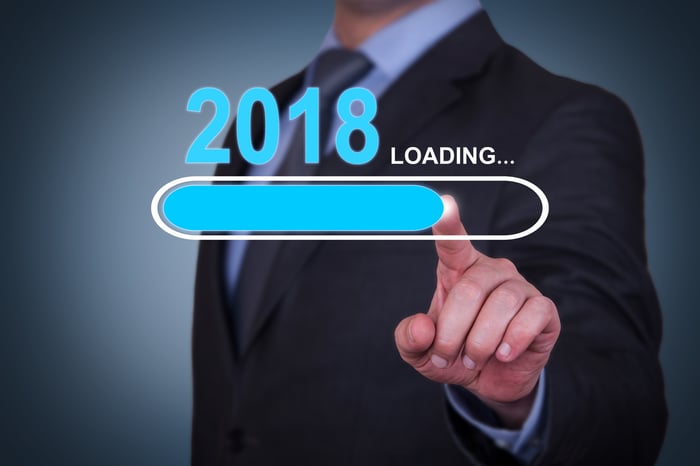 Unfortunately, there are multiple hurdles for this year becoming Amgen's best ever. We can start at the top -- literally. Sales for Amgen's top-selling drug, Enbrel, are slipping in the face of stiff competition in the autoimmune disease market. Enbrel remains the world's No. 3 drug in total revenue (including sales recorded by Amgen's partner, Pfizer), and appears likely to hold its spot in 2018. However, Amgen probably won't be able to count on the drug to contribute strong growth.

It's a similar story for Amgen's second best-selling drug, Neulasta. The biotech reported that sales for the drug, which helps fight risk of infection in chemotherapy patients, fell by 3% year over year in the first three quarters of 2017. With the prospects of increased competition from biosimilars on the way, Neulasta probably will bring in less revenue for Amgen in the future.

Does the company have a better outlook for its No. 3 drug, Aranesp? Not really. Sales for the anemia drug were flat in the first three quarters of last year. And the numbers were even helped somewhat by cannibalization of sales from another one of Amgen's drugs, Epogen. The biotech thinks that Aranesp could face more competition in the U.S. in the future from both branded products and proposed short-acting biosimilars.

Speaking of Epogen, sales for the blockbuster drug continue to fall off significantly for several reasons. Part of the eroding market share stems from patients shifting to other drugs. Amgen also experienced lower sales due to a price reduction negotiated with a large customer. The picture won't get any better: Several companies are developing biosimilar versions of Epogen.

Now consider that Amgen stock has more than doubled in five different years during the company's history. One of those was the biotech's best year to date, 1991, when Amgen stock skyrocketed more than 265%. With the hurdles facing the company, the chances of 2018 topping that performance appear to be very slim.

Is there nothing but gloom and despair for Amgen? Not at all.

At the annual J. P. Morgan Healthcare Conference last week, Amgen CEO Bob Bradway discussed several positives for the company. He didn't gloss over the sales declines for several of the company's top products, but added that these drugs will continue to generate solid cash flow for a long time to come.

More important, Bradway talked about Amgen's five long-term growth drivers. Sales for osteoporosis drug Prolia jumped 19% year over year in the first three quarters of 2017 and should keep the momentum going. PCSK9 cholesterol drug Repatha isn't a huge winner yet, but Bradway said that the addition of positive cardiovascular outcomes to the product label should help boost sales.

Another current drug with significant potential, according to Bradway, is Kyprolis. Amgen hopes that the Food and Drug Administration (FDA) will approve the addition of overall survival data to the product label later this year. If the company gets a thumbs up, that could help sales of the multiple myeloma drug pick up a little more steam.

Amgen also anticipates the addition of another potential blockbuster to its lineup in a few months. The FDA is scheduled to make an approval decision for migraine drug Aimovig by May 17, 2018.

What to realistically expect this year

I don't think investors' expectations should be very high for Amgen's earnings growth in 2018. While Prolia, Repatha, and Kyprolis will likely enjoy momentum, the headwinds from Enbrel and other drugs won't be easy to overcome. And without strong earnings growth, I wouldn't expect Amgen stock to skyrocket.

However, Amgen has two things going for it that investors should really like. First, the company's dividend yield stands at 2.85%. On top of that, Amgen claims one of the fastest-growing dividends on the market.

Second, the biotech is sitting on a mountain of cash, reporting over $41 billion in cash, cash equivalents, and marketable securities as of Sept. 30, 2017. I think investors can expect Amgen to use some of that cash to make a strategic acquisition this year.

2018 probably won't be Amgen's best year yet. However, it could be one of its most interesting ones.