Tesla (NASDAQ:TSLA) has been the biggest global player in the nascent battery energy storage market in everything from residential to utility-scale projects. Its 129-megawatt-hour (MWh) project in Australia, which took less than 100 days to build, is currently the most public example of how energy storage can be deployed and create value in a short amount of time.

Partly because of Tesla's success, companies from across the energy spectrum are eyeing the energy storage market. One that Tesla should fear is Fluence, the joint venture by Siemens (OTC:SIEGY) and AES (NYSE:AES) that has leading energy storage technology and its own financing to build projects around the world. 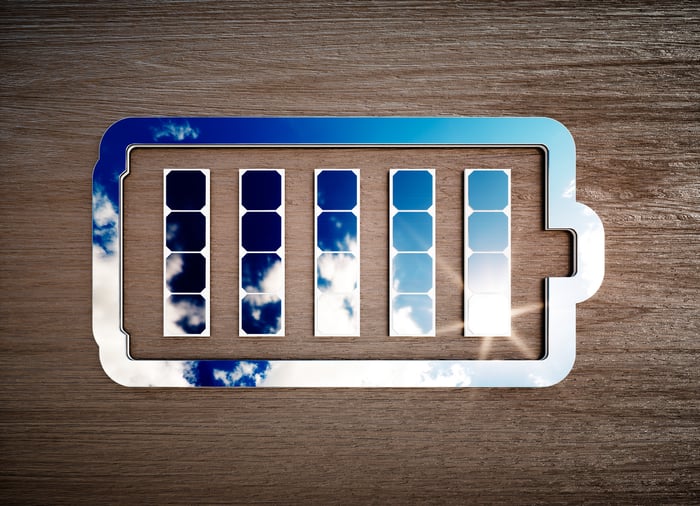 Fluence launches in a big way

In early January, Fluence was officially launched after getting necessary government approvals. The company laid out its strategy like this: "Fluence combines the engineering, product development, implementation and services capabilities of AES Energy Storage and Siemens' energy storage team and embarks on an aggressive expansion of the business backed by the financial support of the two parent organizations."

Fluence already announced that it will build the world's largest lithium-ion battery storage system, a 100 MW/400 MW-hr project built for AES' Alamitos power plant in Long Beach, California. In total, the company has 500 MW of projects deployed or awarded in 15 countries.

Siemens said it will use its sales force to sell Fluence platforms for large and small installations. This will give the energy storage company a sales force that spans 160 countries and works with one of the key utility suppliers globally.

Siemens Financial Services will also be providing leasing and other project finance options for some Fluence projects. This could make it easier to build a sales channel, particularly when selling to commercial customers who may not be able to finance energy storage on their own.

Making solar plus storage a reality

One potentially important announcement was a product called SunFlex Energy Storage, an energy storage product that will be sold to solar project developers. The product is intended to allow solar plants to be able to reduce the variability of the energy they produce and even allow delivery of electricity at night.

Reducing variability and adding the ability to deliver electricity at different times of the day could add a tremendous amount of value for solar developers, particularly in areas where solar production is high, creating challenges for the grid when the sun goes down. Before long, solar plus storage may even be able to provide electricity to the grid 24/7.

Taking the strategy of being a bolt-on addition to renewable energy projects is a unique, and potentially valuable, way to position Fluence in the market. Tesla could be blocked from implementing a similar strategy because it's also a solar developer, so competing developers may not want to give it business, tilting the scales to Fluence when weighing suppliers.

In the battle to build an energy storage business, major players are trying to build scale. That's why Tesla is building the Gigafactory, after all.

That's what makes Fluence so scary for Tesla. The 400 MW-hr project that was announced this month easily beats Tesla's 110 MW-hr of projects deployed in Q3 2017 and most of Fluence's 500 MW of deployed or awarded projects are yet to be built (size in MW-hrs was not disclosed).

What's clear is that Fluence already has the scale to compete, and even beat, Tesla at its own game.

Why Fluence is a game-changer

Combining the capabilities of a major utility with a major electricity infrastructure supplier could be key to unlocking more energy storage around the world. And the financing being provided by Siemens will help make the sales process easier.

What investors should watch for now is whether Fluence can gain traction in stand-alone energy storage projects and storage added to wind or solar developments. I the early momentum Fluence is demonstrating shows it will be a key competitor that Tesla needs to worry about long-term. And with the backing of two major energy players it has the infrastructure to succeed in a booming energy storage business worldwide.