Please ensure Javascript is enabled for purposes of website accessibility
Log In Help Join The Motley Fool
Free Article Join Over 1 Million Premium Members And Get More In-Depth Stock Guidance and Research
By Travis Hoium - Updated May 4, 2018 at 3:09PM

Wind is the top renewable power source in the United States, but the best stocks for investors looking to take advantage of the wind energy boom may not be the ones you'd expect.

Wind energy is now the biggest source of renewable energy in the U.S., and it's still one of the fastest growing sources of new electricity capacity. After the nation added 6.7 gigawatts (GW) of production in the 12 months prior, it had 88.4 GW of wind capacity as of the end of January, compared to 80.0 GW of hydroelectric capacity and 42.3 GW of solar, according to the U.S. Energy Information Administration.

The wind energy boom has been one of the most disruptive forces the electric generation over the past decade, upending wholesale electricity prices from Ohio to California, and causing (in part) the shutdown of hundreds of coal-fueled power plants.

Given all of that, it should be clear to investors that wind is one of the biggest opportunities in the energy sector, but finding wind energy companies that will make money long term may be harder than you think. 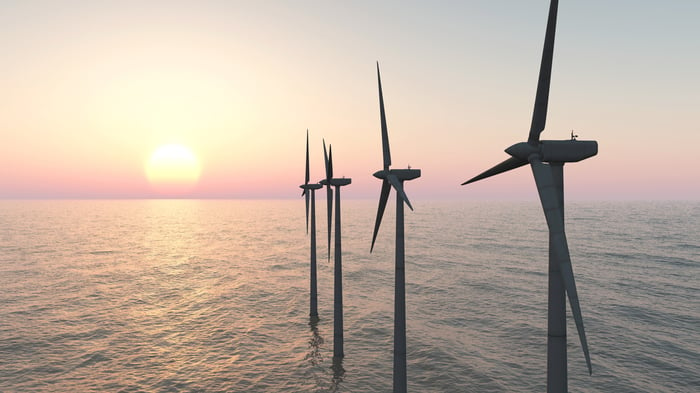 Wind turbines have been a multibillion-dollar business for a decade, and the three biggest players in the U.S. are General Electric (GE -3.32%), Siemens (SIEGY -2.57%), and Vestas Wind Systems (VWSY.F -6.40%). But that doesn't mean they're a great way to invest in wind.

GE's renewable energy unit, which includes its wind turbines, is a fairly small segment of its overall business, with $1.65 billion in revenue in the fiscal first quarter and just $77 million in profit. That compares to $28.7 billion in revenue overall and $2.75 billion in profits in its industrial segments. Moreover, revenue from the renewables segment declined by 7% last quarter to $1.64 billion and (as I'll cover later), reductions in wind turbine prices may make it tough to grow the business long term.

Siemens acquired European competitor Gamesa in 2017 to expand its wind turbine business, but momentum for the company has slowed of late. For its fiscal first quarter 2018, management said that orders were down 24% organically to 2.9 billion euros and revenue was off 10% to 2.1 billion euros. Profit in the segment only fell 1% to 110 million euros, but for a company with 19.8 billion euros in total revenue and 2.2 billion euros in net income in the quarter, the wind business doesn't move the needle much.

Vestas Wind Systems is the pure play in wind energy, but it's struggling too. Its 2017 revenue fell 3% to 10 billion euros, and net profit was down 7% to 894 million euros. Order intake was up 6% in for the year to 11.2 GW, but you can see below that its decline in revenue per watt more than offsets the increase in order volume. 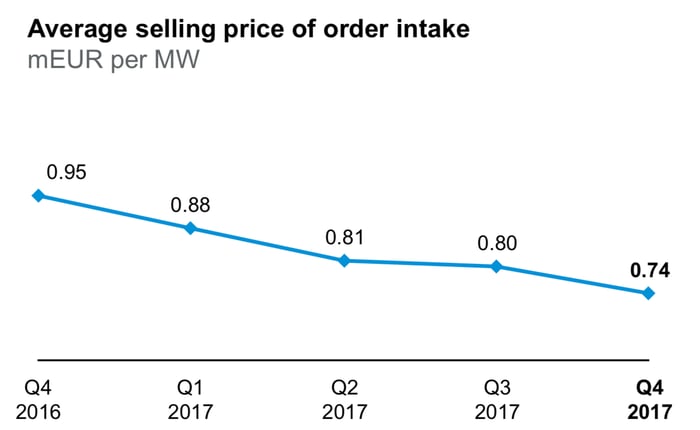 This chart displays the core challenge of investing in wind turbine manufacturers. Even if sales volumes go up, the prices of wind turbines are coming down, so revenue growth is hard to come by. According to the renewable energy analysts at MAKE Consulting, installations are only expected to grow at a compound annual rate of 5% between now and 2026, which may mean wind turbine revenue overall will decline if the price per watt of turbines continues to fall.

How to play wind energy today

Pattern Energy (PEGI) has a 2,700 MW portfolio of wind projects that have an average of 14 years left on their power purchase agreements -- long-term contracts to sell electricity to utilities or corporations. The company also has an affiliated development business with a 10,000 MW pipeline that will keep funneling projects down to the yieldco.

Its dividend -- which currently yields 9.4% -- is high for a yieldco, which could limit future acquisitions because the company won't be able to use stock to buy projects that would be additive to the dividend. Near-term, the dividend should be safe because of the long-term contracts and $116.8 million in cash on the balance sheet available to buy growth projects. In fact, cash available for distribution (CAFD) is expected to grow to $151 million to $181 million, or 96% of the dividend payout at the midpoint, in 2018 after the acquisition of 84 MW of projects in Japan that will add $12.5 million in annual CAFD over the next five years.

Management has also been optimizing the portfolio to increase CAFD without needing to raise capital. For example, in 2017 a $59 million stake in the 182 MW Panhandle 2 project was sold at a CAFD multiple of 12 times and $40 million of that money was then used to buy a controlling interest in the 143 MW Sainte-Marguerite project for 10 times CAFD. The company will also use some of its capital to acquire the 122 MW Tsugaru project at 9 times CAFD when the project is complete in 2021, which looks like a great price given what it can sell assets for today. Pattern Energy may not be a growth dividend, but it's a high yield dividend powered entirely by the wind.

TerraForm Power (TERP) is the other yieldco that generates a significant portion of its revenue from wind. Of the company's 2,606 MW in assets, 1,532 MW are wind power, and it averages 14 years remaining on its power purchase agreements. Management aims to hold onto about 15% to 20% of cash available for distribution (CAFD) in order to grow TerraForm Power organically. The stock's payout yields 6.8% today, and over time, management forecasts the dividend will grow by 5% to 8% per year.

These two yieldcos have a unique focus on wind investments and their predictable long-term cash flows make them a great way to invest in the industry.

The way to invest in wind energy today

I think yieldcos, rather than wind turbine manufacturers, are the best way to invest in wind energy now; they're the companies best able to take advantage of falling wind turbine prices, and the increasing cost-effectiveness of wind energy globally.