Please ensure Javascript is enabled for purposes of website accessibility
Log In Help Join The Motley Fool
Free Article Join Over 1 Million Premium Members And Get More In-Depth Stock Guidance and Research
By Nicholas Rossolillo - Jan 18, 2018 at 7:34AM

If it’s up to Nissan, we may soon find out.

Japanese automaker Nissan (NSANY 0.24%) has been busy the last few months. Last fall, the company unveiled the second-generation Leaf, the first and still best-selling all-electric car. Then in October, a new electric concept crossover called the IMx was unveiled at the Tokyo Motor Show, displaying Nissan's vision of how vehicles, drivers, and society will interact in the future.

For its latest trick, the company demonstrated some surprisingly advanced results from its Brain-to-Vehicle (B2V) project at the Consumer Electronics Show (CES) 2018 in Las Vegas. The technology could play a role in the long-term development of not only driver-assist systems, but also autonomous vehicles. 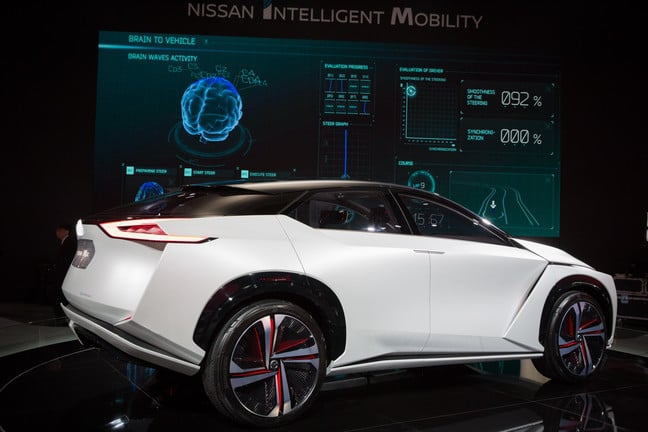 Making the commute better for driver and passenger

What does the B2V tech do? Simply put, it reads the mind of the driver. But how?

The automaker has been borrowing from neuroscience studies on how the brain works to understand what parts of it are involved when driving. The company has learned which areas of the brain "fire" during specific actions, and using those signals, it is creating artificial intelligence algorithms that can react accordingly. In a nutshell, your car would be able to anticipate what you are about to do and begin that action.

In Nissan's demonstration of B2V at CES, someone in a driving simulator wore a system of sensors that read brain activity to predict upcoming actions like accelerating, braking, and turning. The intent isn't to "think" your actions into existence; Nissan wants the driver to always be in control. The idea is more about allowing the car to accelerate, brake, turn, and the like as it bypasses your normal reaction time by up to a half-second. The car would in essence become a copilot that could read your mind, making for safer travel and sharper driving.

The system is being designed for self-driving cars of the future, too. Nissan representatives said the same system could be used to pick up on mental cues from passengers regarding ride comfort. For example, if the occupant begins to think the car should be traveling faster or slower or be driven less aggressively while in traffic, performance could be adjusted accordingly to make occupants more comfortable.

What it means for auto technology

Some surprising leaders are emerging in the autonomous driving race, and Nissan is one of them. The company has been working with French automaker Renault (RNSDF 9.70%) on auto technology, including a recent announcement of a joint venture capital fund for start-ups to help the auto industry.

One of the results of the partnership is industry-leading driver-assist technology called ProPILOT. The package made its debut on the company's 2018 Rogue SUV and will be available on the 2018 Leaf as well. It helps with acceleration, braking, and even steering. The company hasn't said when its brain-reading AI will make it onto the ProPILOT platform, but would like to include it eventually.

Nissan has become a surprise leader in the race toward fully autonomous driving, and many other automakers could be playing catch-up. That doesn't mean you should rush out and buy shares, but it's good news for believers in self-driving cars, as the company's work could help us get there sooner rather than later.

Can a Self-Driving Car By 2020 Happen Without Google?