Waymo's latest move is a first step toward releasing its driverless-vehicle tech abroad.

Waymo, the self-driving technology company owned by Alphabet (GOOG -1.98%) (GOOGL -1.82%), said this week that it had entered into an exclusive partnership with Renault SA (RNSDF 15.34%) and Nissan Motor (NSANY -4.87%) "to explore driverless mobility services for passengers and deliveries in France and Japan." The partnership marks the first of its kind between automotive manufacturers and Waymo.

Waymo said the partnership would initially be to "research commercial, legal, and regulatory issues related to transportation-as-a-service" in the two countries. Waymo's CEO, John Krafcik, said that working with Renault and Nissan will allow the company to bring its autonomous technology to a "global stage." He added in a press statement that Waymo's technology would "deliver transformational mobility solutions to safely serve riders and commercial deliveries in France, Japan, and other countries." 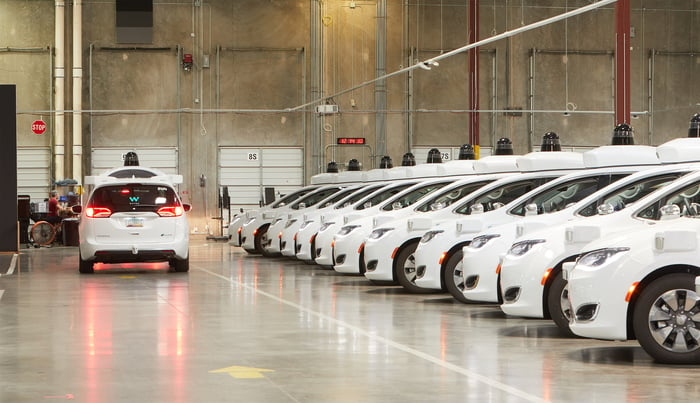 Groupe Renault, a combination of Nissan Motor Co. and Mitsubishi Motors, is the world's largest automotive alliance, which makes the latest news significant for Waymo.

Additionally, the new partnership marks a big step for Waymo toward expanding its driverless-car technology reach beyond the United States.

Why this matters for Waymo's driverless vehicle business

Nissan's CEO, Hiroto Saikawa, said that his company aims to be "an early provider of driverless mobility service" and that the automaker is working with Waymo as "the recognized leader in this space" to explore driverless-vehicle opportunities.

Waymo is indeed a driverless leader. The company has extensive experience building autonomous-vehicle technology and has logged more than 10 million miles of autonomous driving on public U.S. roads. But the company is still at the beginning stages of commercializing its technology, and its testing and partnerships have been mainly focused in the U.S. so far.

For example, Waymo has a commercial autonomous ridesharing service in the Phoenix area right now and has partnered with some local municipalities and companies to test self-driving vehicle services and food deliveries.

But partnering with Renault and Nissan allows Waymo to go beyond its U.S. initiatives and take a first step toward bringing mobility services to other parts of the world. The joint press release said the partnership could expand beyond France and Japan and may include China in the future.

One of Waymo's goals has always been to make the best driverless car technology and then license it to other companies to use. With this partnership, Waymo shows it's ready to begin slowly introducing its tech to global automakers, even if it's only in a research capacity at the moment.

Investors may be frustrated by the seemingly slow pace at which driverless-car technology is reaching the roads and that this new partnership talks more about autonomous-vehicle research than revenue opportunities. But these early steps are laying the foundation for a massive driverless-vehicle market that could be worth $7 trillion by 2050.

Waymo is one of the undisputed leaders in the driverless vehicle space, and this new partnership is a significant first step toward bringing its technology to other countries while learning more about the regulatory hurdles it may face overseas. Investors should be patient and take this latest news as the beginning of a big -- and international -- opportunity for Waymo to move passengers and goods autonomously.