Waymo launched its commercial ridesharing service in Phoenix just six months ago, and already has roughly 1,000 riders using the service daily to take self-driving trips to work, school, grocery stores, and elsewhere. While the cars drive themselves, Waymo still has a safety driver in each car in case a human needs to take over the vehicle.

Krafcik said in the post that "Once Waymo vehicles are on the platform, Lyft users in the area will have the option to select a Waymo directly from the Lyft app for eligible rides."

The new partnership is a significant move for both Waymo and Lyft as the autonomous ridesharing market begins to take shape, and each stands to benefit from the new relationship. 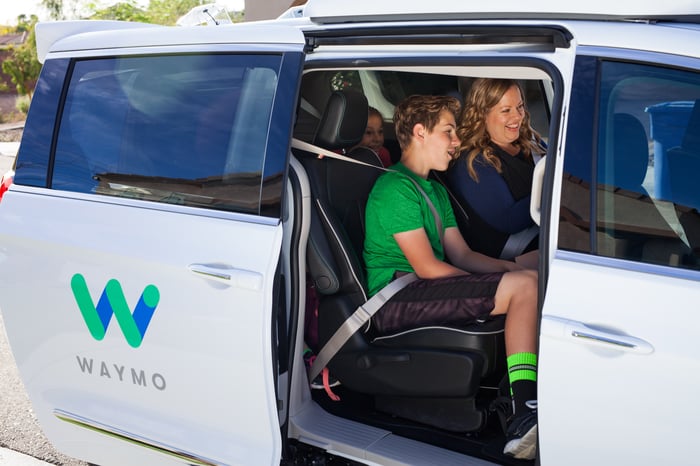 A win-win for Lyft and Waymo

While the ridesharing market is gaining traction worldwide, the profitability of the model is still in question. The fees Lyft pays to its drivers and the company's technology, marketing, and other expenses outpace the revenue intake for the company right now. That's why Lyft and its rival Uber are looking to autonomous vehicles as a way to lower costs in the future.

Instead of creating all of its own self-driving technology, Lyft has opted to partner with other companies that are already making huge strides. For example, Lyft has worked with the self-driving car tech company Aptiv (NYSE: APTV) to provide more than 30,000 autonomous rides to customers in Las Vegas.

The new partnership with Waymo is yet another opportunity for Lyft to introduce its ridesharing customers to autonomous vehicles. It also allows them to gather important data on how riders respond to this type of technology and how well it works. Understanding how customers use autonomous ridesharing vehicles could be critical information for Lyft in the coming years, if the company's management begins to pivot more in that direction.

For Waymo, the new partnership with Lyft allows the company to expand its autonomous-ridesharing reach in Phoenix. Krafcik said that adding Waymo vehicles to Lyft's ridesharing network will help his company "welcome even more riders" to experience self-driving technology, and give Waymo "the opportunity to collect valuable feedback" from how riders use the service.

In addition to bringing more riders to Waymo's service, the partnership will help Waymo show Lyft and other companies just how well its self-driving technology works for ridesharing. Waymo has said that one of the ways it plans to make money from its technology is by licensing it out to other tech companies and automakers. This partnership is just one more way for Waymo to prove its technology is ready for real-world use.

For investors who are still trying to figure out the ridesharing market and how autonomous vehicles fit into it, it would be wise to keep a close eye on this new partnership. Alphabet's Waymo is one of the leading driverless-car companies in the U.S., and Lyft is the second-largest ridesharing company in the country. What these companies learn from this partnership could potentially influence their businesses for years to come.