Ride-hailing company Lyft recently announced that since January, it has completed 5,000 self-driving rides in Las Vegas. At the beginning of the year, the company launched a trial self-driving service in the city in partnership with automotive tech supplier Aptiv (NYSE: APTV). Lyft's offering is one of the only commercially available self-driving ride-hailing services available to the public.

Riders who select routes from 20 different locations could end up getting an autonomous vehicle as their driver, though there are still two safety drivers in the front seats overseeing the rides.

Lyft and Aptiv said in a statement that Lyft charges the same price for these rides as it does its trips handled by human drivers, and that both companies "are making money on this." This marks the first time any company has earned revenue (no matter how small) from autonomous ride-hailing -- an early indicator that the public is becoming increasingly open to such services. 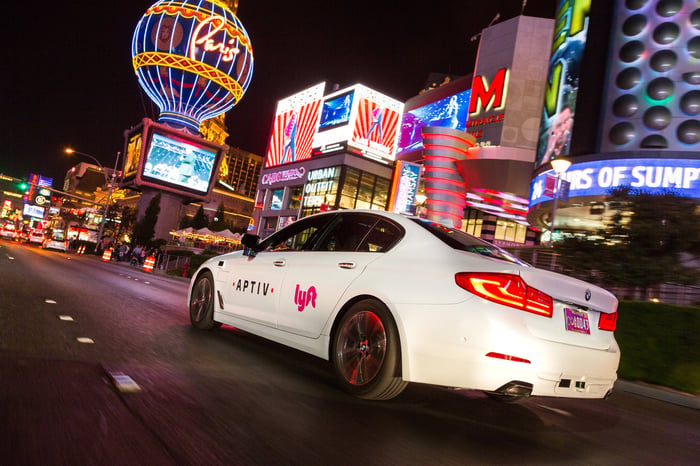 Why this matters to the growing autonomous ride-hailing market

Aptiv and Lyft's announcement may not seem all that important at first glance, but there are two key things that investors interested in self-driving vehicles should keep in mind. The first is the number of autonomous public rides that the companies have completed. Five thousand rides over an eight-month span are enough to show that riders may not be as apprehensive about self-driving vehicles as some earlier research has indicated.

The Brookings Institution found early this year that only 21% of riders would be willing to ride in a self-driving car. While it still may be true that some people are skeptical about self-driving tech, Aptiv and Lyft have proven that they can still get a lot of users to trust them for short drives around a major U.S. city.

Of course, Alphabet's (NASDAQ:GOOG) (NASDAQ:GOOGL) Waymo has already helped prove this already with its Early Rider program in Phoenix. Waymo's fully autonomous software drives Fiat Chrysler minivans around the suburbs of that area, without human drivers behind the wheel. The program is only open to a select group of people, but Waymo is expanding its partnerships with companies to prove the viability of the service as a potentially money-making business.

The second thing to note is that Aptiv and Lyft are actually making money from their self-driving ride-hailing services. They're the first companies doing so. And that matters, because until recently, all of the companies that are either testing autonomous ride-hailing services or have plans for them (which include Waymo, General Motors, and others) have lacked hard evidence that people are willing to fork over cash to ride in a self-driving car.

With driverless-vehicle tech still in its infant stages, any indicator that people are interested in using these services and willing to pay for them is critical data that should help spur on this burgeoning market.

Why this is important for Aptiv

Aptiv is one of the leading suppliers of software and hardware to automakers, with a specific focus on autonomous-driving systems. The company may be partnering with Lyft right now, but investors should keep in mind that Aptiv is free to sell or license its technology to any automaker or tech company.

Aptiv is already working to develop Level 4 autonomous vehicles with Intel's Mobileye -- a target launch is currently set for some time in 2019. Proving that riders are ready to pay for short self-driving rides could open up even more partnerships or licensing opportunities in the near future.

Goldman Sachs estimates that ride-hailing businesses will grow into a $285 billion market by 2030, and autonomous-vehicle technology could end up being a huge catalyst for this market in the coming decade.

Investors should remember that Aptiv is one of the closest investments it's possible to get right now to a pure play in the driverless-vehicle market. The company's stock may be volatile in the short term, as the autonomous-vehicle market takes shape. But Aptiv's early lead, and its long history of providing advanced technologies to automakers, give the company a head start in benefiting from the growing autonomous market.