Please ensure Javascript is enabled for purposes of website accessibility
Log In Help Join The Motley Fool
Free Article Join Over 1 Million Premium Members And Get More In-Depth Stock Guidance and Research
By Chris Neiger - Apr 9, 2019 at 9:45AM

Aptiv, Lyft, and Verizon are creating their own roadmaps for the future of self-driving vehicles.

The autonomous vehicle (AV) market is going to take years to mature, but a lot of progress is already being made -- and investors should start taking notice of its growth now. In 2040, an estimated 33 million driverless vehicles will be sold annually, and Intel and Strategy Analytics predict that self-driving vehicles and their services will create a $7 trillion industry by 2050.

There are large players, of course, that are making huge inroads in the autonomous vehicle space. Alphabet's (NASDAQ: GOOG) (NASDAQ: GOOG) Waymo has logged millions of miles of autonomous driving with its vehicles and launched a (very limited) self-driving ride-sharing service at the end of last year. Meanwhile, GM's Cruise Automation subsidiary is building its own self-driving vehicles and has plans to introduce its own self-driving ride-sharing service later this year.  But there are plenty of other smaller players in the AV space that investors may have overlooked. And with this market poised to be so large, investors should consider what Aptiv (NYSE: APTV), Lyft (LYFT -4.30%), and Verizon Communications (VZ 1.78%) are doing in this space right now. 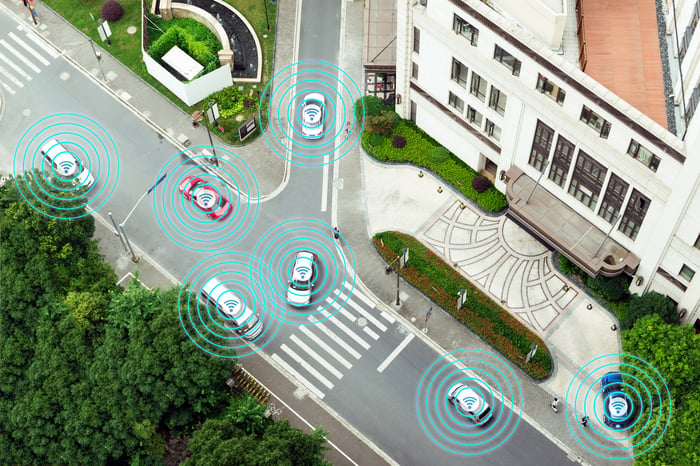 Aptiv is the driverless-car tech company that was spun off from the automotive-supplier company Delphi Automotive back in 2017. The company has its own AV platform that pairs sensors, internet connectivity, and over-the-air updates to allow vehicles not just to drive themselves, but also control active safety and infotainment systems. It recently debuted a new autonomous vehicle research facility in Las Vegas and has 75 test vehicles on the road in the city.

In the most recent quarter, Aptiv's sales grew 8% year over year, to $3.6 billion, and adjusted earnings per share were up 5%, to $1.34. About two-thirds of the company's revenue came from its Signal and Power Solutions business, which brought in $2.6 billion in the quarter. Advanced Safety and Use Experience sales took up the rest of the company's top line.

While that growth isn't all that impressive by most standards, investors should remember that the AV market is just getting started and the company is building and testing self-driving platforms now that could become the standards in a few years. This means investors would be wise to keep track of this under-the-radar AV play.

Though Lyft just went public, investors should know that the company has spent years working with self-driving technology -- both on its own and with partners. In fact, Aptiv has been one of Lyft's most significant partners, and the two companies have about 30 AVs running in Las Vegas.

Lyft and Aptiv just announced earlier this year that they had completed 30,000 self-driving rides since the two companies began their partnership.

But Lyft is quietly building itself into a self-driving company in its own right, as well. The company's self-driving team is led by Luc Vincent, who spent more than a decade at Google and is credited as the creator of Google Street View. Lyft already has a team of 300 engineers working on AV tech and has plans to double that figure by next year.

The company also purchased a smaller AV company called Blue Vision late last year to help Lyft build out its own 3D-mapping tech. The tech will be used in combination with lidar and other sensors to give its AVs a more complete picture of the world around them.

In Lyft's recently reported financials, the company said that its revenue more than doubled from 2017 to 2018, rising to $2.2 billion. But Lyft lost $911.3 million in 2018. It's worth mentioning that Lyft will likely take years before its AV prospects fully materialize. But the company is investing in AV tech now so that it can adapt as more self-driving services begin to take root.

Verizon may be the oddest one to add to a list of AV plays, but you have to look past the company's focus on consumer smartphone plans to see that self-driving cars will be very dependent on cellular internet connections -- and that Verizon will likely play an important role.

Autonomous vehicles process some of their complex AI data from computers in the car, but some of their data is also offloaded to AI servers so that they can be processed, tested, stored, and shared with other AVs later on. And as AVs become more widespread, they'll need faster and more reliable cellular connections to process this data.

That's where Verizon and its upcoming 5G network come into play, as 5G is the next iteration of cellular connectivity and will be up to 20 times faster than 4G LTE and have lower latency (the time it takes a device to communicate with a cell tower). This means that self-driving cars will be able to communicate far faster and more efficiently than they can today and will likely use that connection to share driving data with each other.

5G may seem like the next big gimmick for wireless carriers, but it will eventually allow cities to install sensors that can communicate traffic data to vehicles and allow AVs to process the mountains of information that they'll generate while driving.

The company brought in $34.3 billion in the most recent quarter, up just 1% year over year. Meanwhile, earnings popped 30%, to $1.12. Verizon has certainly had its share of misses lately -- most recently with its $4.6 billion goodwill impairment charge related to Verizon Media -- but don't count this telecom out. 5G is pacing the way for self-deicing vehicles, and Verizon is leading the charge.

Just keep your expectations in check

While all of these companies have lots of potential in the AV space, it's going to take years for them to begin seeing sizable contributions to their bottom lines. That doesn't mean that self-driving cars aren't coming or that they won't be transformative when they do; it just means that investors should temper their expectations as this new market unfolds.

Is Verizon Stock a Buy Now?