Revenue and riders are growing, while losses are increasing. Bullish on Lyft or not, it may be best to sit this IPO out.

Lyft recently filed its S-1 form -- the official paperwork that registers a company's securities with the Securities and Exchange Commission (SEC) -- which means that investors finally got a closer look at the ride-hailing company's financials as it moved ever closer to its initial public offering.

The company is aiming for an IPO in early April, according to Reuters, and the latest estimates put the company's valuation between $20 billion and $25 billion. With the filing, Lyft will presumably beat its rival Uber to the publicly traded markets, though Uber is a much larger company and is currently valued at around $120 billion.

If you're intrigued by a soon-to-be-publicly-traded company or its industry, it's generally worth taking some time to sift through the company's S-1 to find out how well it's growing, how much money it's making (or not making), how quickly sales are increasing, and the types of risks it faces.

If you're not inclined to read through SEC forms in your spare time, fear not: Here are a few key things to know from Lyft's IPO filing. 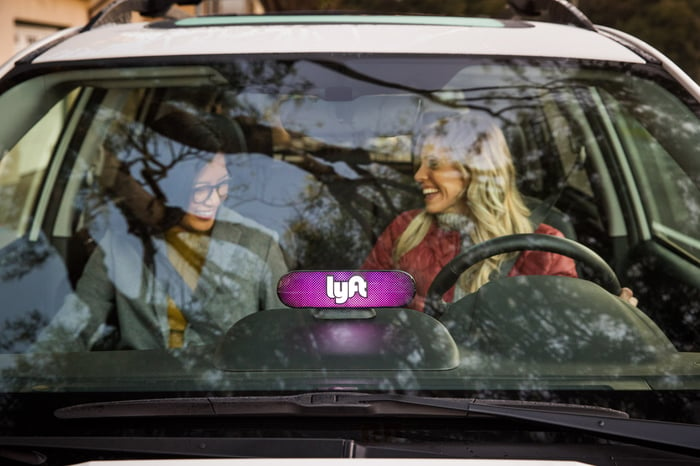 Not only are more people using Lyft's service, but the number of rides that users are taking has dramatically increased as well. In the fourth quarter of 2018, users took 178.4 million rides, up from 116.3 million in the same period of 2017.

Lyft said in its filing that the increase in new riders -- as well as an uptick in the number of trips they're taking -- has helped the company expand its ride-hailing market share from 22% at the end of 2016 to 39% now.

In addition to impressive sales growth, which is to be expected from growth companies, Lyft also disclosed how much revenue it earns per active user. This metric is particularly important because it shows Lyft's ability to gradually earn more money from its customers over time.

The only drop during the past two years occurred in Q2 2016, which was "a result of a significant increase in incentives related to driver sign-up bonuses during this quarter," Lyft said in its S-1 form. All in all, this metric is moving in the right direction.

The S-1 showed that Lyft's bookings -- the total dollar value that riders spend on its platform, minus reductions like drivers' tips -- increased by 76% last year. Bookings have certainly improved over the past two years, considering that they totaled just $1.9 billion in 2016.

Of course, investors will want to see bookings eventually translate into profit for Lyft. But with the company firmly in growth mode, Lyft is spending a lot of money to attract more customers and gain market share.

Lyft's net loss widened to $911.3 million in 2018, up from its losses of $688.3 million in 2017 and $682.8 million in 2016. Where is all of the money going? The biggest expense for Lyft is what's called "cost of revenue," a category that includes "insurance costs, payment processing fees, hosting and platform-related technology." For example, Lyft will spend $300 million for web hosting from Amazon Web Services (AWS) over the next three years.

The chart below shows revenue as a percentage of Lyft's bookings over the past two years: 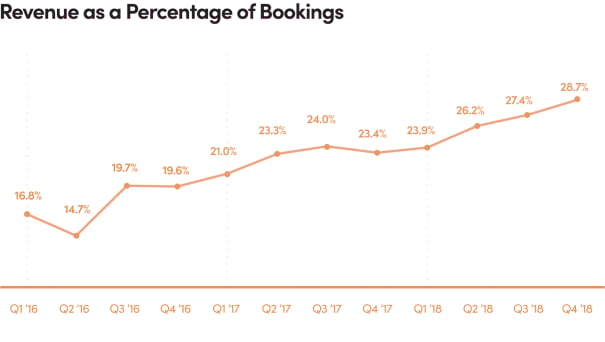 Lyft's cost of revenue jumped 88.5% from 2017 to 2018, which is no surprise considering that Lyft is trying to grow quickly right now. Other significant costs weighing down the company's profits include its sales and marketing expenses, which increased to $803.7 million in 2018, up from $567 million in the previous year. Research and development costs more than doubled from 2017 to 2018 -- hitting $300.1 million -- as the company invests in new technologies including autonomous vehicles.

The company has also invested heavily in building out what it calls its multimodal services (rides using scooters and bikes); it spent an estimated $250 million in 2018 to acquire Motivate, the largest bike-sharing platform in the U.S.

As part of its filing, the company highlighted several risks that it could face. Chief among them is the possibility that the U.S. government could pressure Lyft to change the working status of its drivers from individual contractors to employees. Uber and Lyft both hire drivers as independent contractors, which means the drivers aren't employees and don't receive overtime pay, or benefits such as health insurance.

Lyft said that any change in this model "could harm our business, financial condition and results of operations." Lyft also disclosed that it currently has "several thousand" lawsuits against it, including many by drivers wanting to be reclassified from their status as independent contractors. It's worth pointing out that any new laws that could change a driver's status would also apply to Lyft's main rival, Uber. So, although this is a concern for investors, any changes here would impact the entire ride-hailing market, and likely keep competitors on a level playing field.

Speaking of Uber, Lyft noted in the filing that some of its "competitors have greater financial, technical, marketing, research and development, manufacturing and other resources, greater name recognition, longer operating histories or a larger user base than we do." One of the biggest risk factors facing Lyft's business may be Uber's massive reach. Uber not only holds a dominant market share in the U.S., but has also expanded into other countries, and arguably has a stronger brand than Lyft.

Finally, investors will have to trust the co-founders of Lyft, John Zimmer and Logan Green, to make the right decisions for the company -- because together they will control about half of its voting rights. That's not unusual, but you may recall the disastrous leadership of Uber's founder and former CEO, Travis Kalanick, who was ousted from his company in 2017. Lyft is a different company, of course, but Zimmer and Green's leadership running a publicly traded company is untested.

Lyft's IPO is likely to come in the next few weeks, but investors may want to sit this one out -- at least for now. Though the S-1 provides the most detailed insight into the company that investors have had access to yet, it's still an incomplete picture.

It would be wise not to get caught up in the hype of Lyft's IPO -- or any IPO for that matter -- and wait until the company has released a few quarters of financial information as a publicly traded company before deciding whether to buy shares.

Research shows that IPOs typically underperform the market for a few years. That means that even if Lyft turns out to be a great long-term investment, you don't need to worry about getting in on the ground floor, because it's likely there will be plenty of time to buy shares at the right price. If you're still tempted, consider that Warren Buffett, the billionaire investor and CEO of Berkshire Hathaway, thinks individual investors should pass on IPOs. "You don't have to really worry about what's really going on in IPOs," Buffett once said. "People win lotteries every day."

John Mackey, CEO of Whole Foods Market, an Amazon subsidiary, is a member of The Motley Fool’s board of directors. Chris Neiger has no position in any of the stocks mentioned. The Motley Fool owns shares of and recommends AMZN and BRK-B. The Motley Fool has a disclosure policy.

Stock Market Sell-Off: 3 Fantastic Choices to Buy Ahead of the Recovery