Public demand for autonomous vehicles may lag behind their technological capabilities.

Later this year, Alphabet's (GOOGL -0.58%) (GOOG -0.36%) self-driving car company, Waymo, expects to launch a public robotaxi service in several cities that will allow people to hail self-driving cars. Meanwhile, electric automaker Tesla has said that one of its vehicles will drive itself across the country within the next six months. And chipmaker NVIDIA (NASDAQ: NVDA) says 25 automakers are using latest version of its autonomous driving supercomputer to create fully autonomous vehicles, some of which will be available by 2021.

These announcements show just how quickly driverless car technologies are advancing. But there's also evidence that a large portion of the general public isn't quite ready to embrace autonomous vehicles.

It's worth noting that the survey was conducted before the March accident in which a self-driving vehicle owned by Uber hit and killed a pedestrian in Arizona. As driverless cars become more common, it's inevitable that they will be involved in more accidents -- regardless of the how good the technology is. And when those incidents are publicized, people could become even more wary of such vehicles. 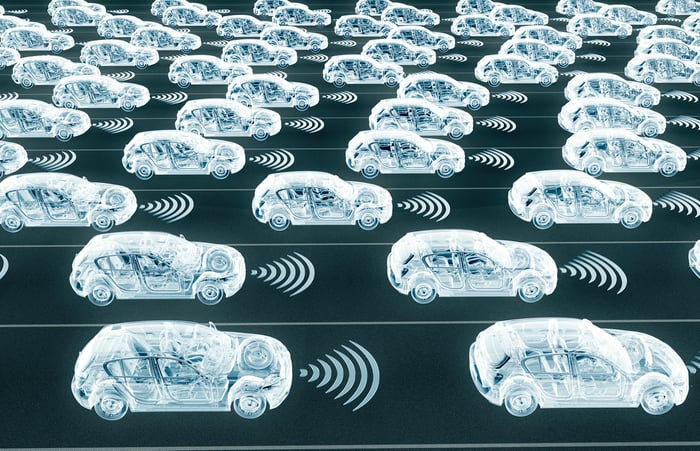 Technology is advancing quickly, but the rollout will likely be slow

To understand just how rapidly some driverless car companies are pushing toward commercially viable systems, we need only to look to Waymo. It's one of the most advanced in the space, with more than 5 million miles of autonomous driving under its belt, and 2.7 billion virtual miles logged through simulations.

Waymo is already testing its ride-hailing service in Phoenix and says it plans to add 20,000 Jaguar sedans to its fleet and expand to new cities over the next two years.

The Alphabet subsidiary's leaders believe, like many others, that driverless vehicles will make our roads safer. "At Waymo, we've been building the world's most experienced driver: a safe, skillful and savvy chauffeur that can take people and things from A to B at the push of a button," reads a blog post from the Waymo team.

Getting autonomous vehicles to the point where they're 100% reliable is clearly a major task, but changing the opinion of the many people who don't trust that the goal is achievable could be an equally daunting challenge. One thing that could encourage greater trust of the vehicles, as noted by the J.D. Power report, is simply giving people the chance to see the technology in the real world -- something that's already beginning to happen as more folks buy new cars equipped with semi-autonomous driving features.

Only a small fraction of American drivers have been behind the wheel of a vehicle with semi-autonomous features, and it will be years before a majority has tried one. Lacking that firsthand experience, it's safe to expect some people will remain reluctant to trust the technology.

First, it's important to recognize that hardly any automakers or technology companies are seeing huge gains on their top or bottom lines from driverless car technologies right now.

Waymo's driverless ride-hailing service may soon become a viable business, but it isn't even a blip on Alphabet's top line yet. As promising as the idea is, investors shouldn't forget that 98% of Alphabet's revenue comes from Google's sales -- and the large majority of that comes from advertising. Similarly, NVIDIA talks a lot about its Drive PX Pegasus computer for driverless cars, and estimates its autonomous vehicle total addressable market at $8 billion by 2025. In the company's latest quarter, less than 5% of sales came from its automotive division.

Driverless car technology is advancing quickly, and neither the Uber crash nor public skepticism are going to stop it -- automakers and tech companies are both out in front of where public sentiment is right now. That's another reason for investors who are excited about driverless car stocks to remember that we are still years away from seeing the true impact of these technologies on businesses' bottom lines.