Intel Corporation (NASDAQ:INTC) and NVIDIA (NASDAQ:NVDA) are two important chipmakers that are both taking their processor know-how and applying it to new and lucrative markets.

NVIDIA makes graphics processors that it primarily sells for gaming, but over the past few years, the company has been able to use its GPUs for things like artificial intelligence (AI), data centers, and driverless cars.

Intel, of course, has been a huge supplier of processors for computers; it is now transitioning its chips into some of the same opportunities as NVIDIA, like data centers and driverless cars.

So let's take a quick look at what each company is doing right, and which looks like the better long-term buy. 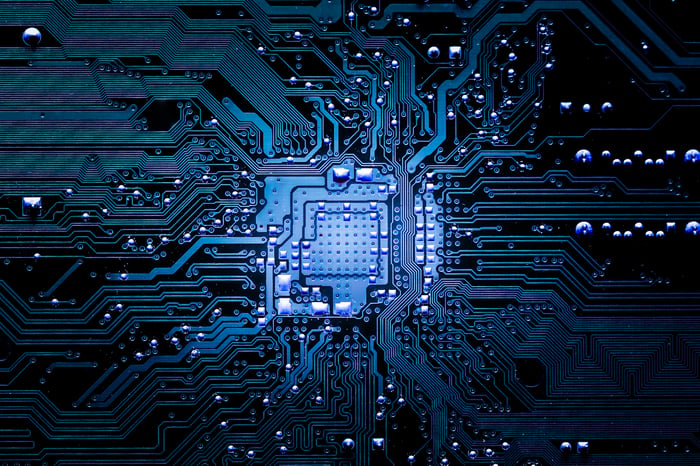 Intel has been transitioning away from its reliance on PC-chip sales and looking toward cloud computing for new opportunities -- and it's already starting to pay off.

Cloud computing is expected to become a $411 billion market by 2020, and Intel is benefiting by supplying the processors that run data centers for cloud-computing services. Intel currently holds about 98% of the data center market and brought in 30% of its total sales from the segment in the most recent quarter.

But Intel is also building itself into a key player in the driverless-car space, especially with its purchase of Mobileye last year. Mobileye makes the technologies for Advanced Driver Assistance Systems (ADAS), like automatic braking, and has about 70% of that market right now. That's important for Intel's driverless car ambitions because ADAS are part of the broader autonomous-vehicle technologies. Intel and Mobileye recently teamed up with Aptiv (which makes software and hardware for driverless cars) to release an off-the-shelf autonomous-vehicle platform next year.

Additionally, Intel is also the main chip supplier for Alphabet's (NASDAQ:GOOG) (NASDAQ:GOOGL) driverless-car company, Waymo. Intel and Waymo announced their partnerships last year, and the news gave Intel a lot of credibility as a chip supplier for driverless cars. The fact that Intel's processors can handle Waymo's advanced autonomous-driving systems means that other automakers and tech companies are likely to look to Intel for their future driverless-car needs.

Intel's shares are up about 17% over the past 12 months, and the company's stock currently trades at about 13 times its forward earnings, which is far below the tech-sector average. The chipmaker still faces a long road ahead as it builds out its driverless-car opportunity, but its current moves in data centers and driverless cars are putting the company in a great position to grow.

Like Intel, NVIDIA is finding new ways to breathe life into its processors. The key difference is that while Intel's PC chip business is fading, NVIDIA's key sales segment is still booming.

The company makes about 59% of its top line from sales of its graphics processors for PC gaming, and in the third quarter of fiscal 2018, its gaming revenue jumped 25% year over year. The strength of its core business has not only allowed NVIDIA to outperform its competitors in the gaming space but has also given it a strong foundation to launch into new segments.

One of its most promising opportunities is in artificial intelligence. NVIDIA's graphics processors are great at taking visual information from cameras and helping computers understand what they're looking at, and that's encouraging companies to use NVIDIA's chips for AI data centers and driverless cars.

NVIDIA is already on the third iteration of its own driverless-car computing platform, called Pegasus, and has already forged multiple partnerships with automotive manufacturers to use its technology in future versions of semiautonomous vehicles.

In the data center space, Alphabet, Facebook, and Amazon tap NVIDIA's graphics processors to help them offer cloud-based AI services to their customers.

In fact, NVIDIA's management believes its total addressable market in AI, including autonomous vehicles and data centers, will be about $40 billion between now and 2035.

NVIDIA's shares currently trade at about 47 times the company's forward earnings, which is a hefty premium, and its stock has gained more than 100% over the past 12 months. But NVIDIA is just getting started in burgeoning AI and driverless-car markets, so there's likely still a lot of room for this company to grow.

This matchup is difficult because I'm encouraged by Intel's latest moves, but the company is still in the middle of transitioning to new opportunities, and things could go sideways as it makes the jump from PCs to driverless cars. Meanwhile, NVIDIA's core business is humming along, and it's successfully building out its AI, data center, and driverless-car offerings -- but investors have pushed its share price up so much that its shares are now looking pretty expensive compared to expected earnings.

Having said that, I still think NVIDIA's business looks stronger overall. The company far outpaces its competitors in the gaming-processor space, and NVIDIA's management has proved it knows how to take the company's chips and apply them to entirely new markets. For that reason, I think NVIDIA is the better buy right now.