Canadian Pacific Railway (NYSE:CP) earnings for the fourth quarter of 2017 were monstrous, jumping 159% compared to this time last year. For anyone that follows the railroad business at all, that should sound a little suspicious. Sure, railroad companies can be excellent wealth building machines, but doubling earnings in a year is extremely rare.

So let's dig into Canadian Pacific's bottom line this past quarter to see what was up and what management expects for the rest of 2018. 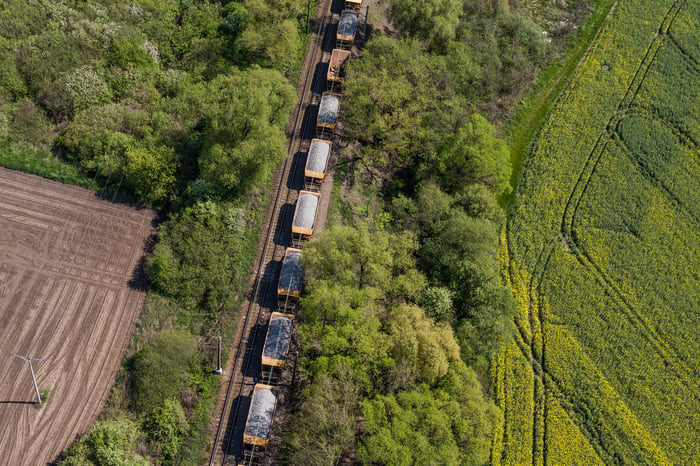 Whenever a number jumps out like Canadian Pacific's net income for the quarter, you have to see what is behind it. According to management, net income benefited from an income tax recovery of 527 million Canadian dollars related to changes to the U.S. tax code. Canadian Pacific brought forward several hundred million in deferred tax assets, which was the reason for the sweeping gain. If we were to adjust earnings for this one-time benefit, earnings per share would have been CA$3.22.

Big numbers and accounting anomalies like that can be a little distracting, but keep in mind that this was a one-time event. So don't expect similar blowout quarters. What's more important are the nuts and bolts of Canadian Pacific's operations, and the company delivered on that end as well. Revenue ticked up on growth from its metals, minerals, and consumer products segment as well as its energy, chemicals, and plastic segments, which climbed 26% and 15%, respectively. These two divisions helped to offset weakness in its automotive and grain sectors.

Also, the company continued to deliver better operational performance as its operating ratio -- a common industry metric that is operating costs divided by revenue -- was lower again this quarter at 56.1%. It should be noted, though, that fuel costs are on the rise for the company. So it's possible that we could see Canadian Pacific's operating ratio go up from here as a result.

As part of its fourth-quarter earnings release. Canadian Pacific also gave its guidance for 2018. Here's what CEO Keith Creel had to say about the coming year.

With a 2018 plan that balances strategic growth with continued productivity improvement, CP expects revenue growth in the mid-single digits and adjusted diluted EPS growth to be in the low double-digits. I have never been more excited about the potential for CP as we write the next chapter in our compelling story, one focused on sustainable, profitable growth.

Those results were based on 2017's adjusted earnings per share of CA$11.39 and didn't include the one-time tax benefit. It also assumes a foreign exchange rate of CA$1.25-CA$1.30 per U.S. dollar and a tax rate in the range of 24.5%-25%. Management expects CA$1.35 to CA$1.5 billion in capital spending for the year compared to CA$1.34 in 2017. Considering that the company generated CA$887 million in free cash flow this past year, it seems as though it can easily handle the higher spending level even if revenue and earnings remain flat. 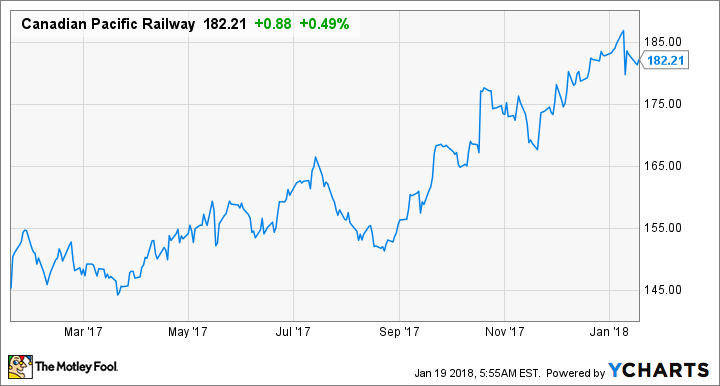 Canadian Pacific continues to be one of the best-run railroad operations in North America. Its network provides critical links across the continent and does so at surprisingly low costs. One thing investors should keep in mind is, over the next several quarters, that one-time net income gain will likely impact its valuation and make it appear cheaper on a price-to-earnings ratio basis than its underlying earnings suggest. So don't just jump into the stock because of a low P/E ratio.

That said, the company continues to do all the right things and will have the additional tailwind of lower taxes in 2018 and beyond. If you are looking for exposure to the railroad industry, Canadian Pacific should be high on your list.