Shares in Deere & Company (NYSE:DE) have gone up nearly 60% in the last 12 months, but there could be more to come. After a difficult few years operationally, the company looks set for a strong 2018. I think there are three key reasons to like Deere this year. Let's look at why this could be the case. 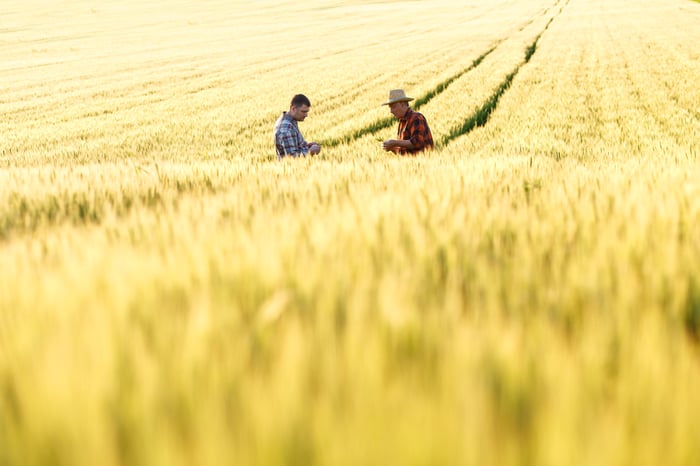 However, Deere is forecasting 5% to 10% growth in net sales in U.S. and Canada -- a reversal of a declining trend. Moreover, it's most troubled areas, large agricultural equipment, is set for a bounce.

To put this into context, Deere generates nearly 60% of its equipment sales from the U.S. and Canada and around half of its overall agriculture and turf sales from large equipment sales. Unfortunately, sales of large agricultural equipment declined by 60% from 2013-2016, and the impact on Deere's overall sales and profit can be seen below. 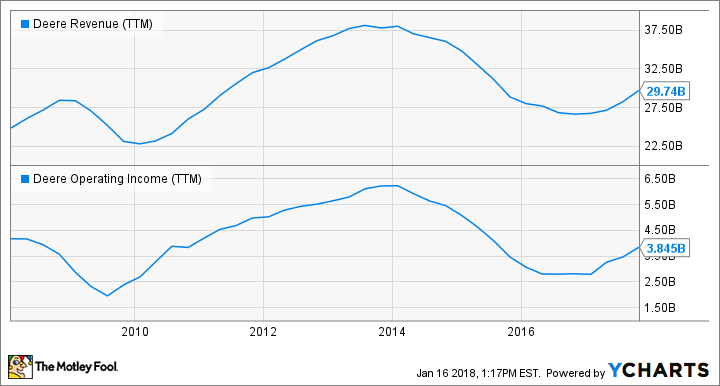 Speaking on the last earnings call in November, Manager of Investor Communications Josh Jepsen said, "Despite current commodities prices the industry is experiencing stronger replacement demand for large equipment," and CFO Raj Kalathr went on to argue, "Even in 2018, with the sales on the upswing, we see the US market for things like large tractors, for example remaining over 25% below what we consider to be a mid-cycle level." In other words, the upside potential is significant.

Deere's forecast for a 22% increase in net sales in 2018 (excluding the Wirtgen acquisition it comes to around 10%) comes as the company appears to be over the worst in terms of potential risk from the amount of equipment it has on operating leases. It's an issue that has worried investors.

Simply put, Deere has significantly increased the equipment it has on short-term leases (notably one-year) in the past few years as farmers have been reluctant to buy equipment outright. This creates a situation whereby a glut of used equipment could hit the market after the leases expire, and if this occurs in a period of weak sales, then the downward pressure on prices of Deere's new equipment could be significant.

Fortunately, as you can see below, peak growth in operating leases occurred in the first quarter of 2016, and Deere has dealt well with the issue. Going into 2018, equipment sales are set for growth, and operating leases, although still growing, are increasing at a slowing rate. 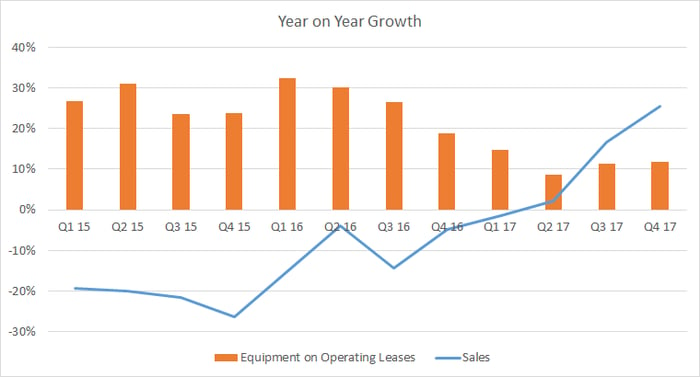 In fact, Deere's execution during the downturn has been excellent on the whole.

Shares in Caterpillar Inc. (NYSE:CAT) have surged partly on the back of an improving outlook for infrastructural spending. Caterpillar's often seen as one of the best ways to play the theme, but Deere's intended acquisition of Wirtgen -- expected to close by the first quarter of 2018 -- will significantly increase Deere's exposure.

Based on Deere management's figures, the contribution of the construction and forestry segment's sales to overall equipment sales in 2016 would have been 30% with Wirtgen included, compared to 21% as reported. Moreover, Wirtgen is the global leader in road construction equipment (around 26% of Caterpillar's construction sales), so if you're buying Caterpillar as a play on growth in infrastructural spending, then Deere also deserves a close look.

In addition, the company has managed the downturn well in terms of productivity improvements, inventory management, and equipment on operating leases, and the Wirtgen acquisition comes at the right time for believers in the infrastructural boom investment thesis. Deere looks set for a good year.