Diabetes ranks as one of the top healthcare issues in the United States. Between 1990 and 2010, the number of Americans with diabetes tripled. By 2030, it's projected that nearly 55 million Americans will have diabetes -- a 54% increase from 2015.

With such a dire need, you'd think lots of companies would be developing products to help manage and treat diabetes. And you'd be right. The diabetes market has grown significantly and should continue to grow well into the future.

With that in mind, I checked out which stocks of companies focused on diabetes products Wall Street analysts think will perform the best in 2018. What I found was somewhat surprising. Senseonics Holdings (NYSEMKT:SENS), Lexicon Pharmaceuticals (NASDAQ:LXRX), and MannKind (NASDAQ: MNKD) ranked as the three diabetes stocks that Wall Street projects will grow the fastest over the next 12 months. But is this optimism justified? 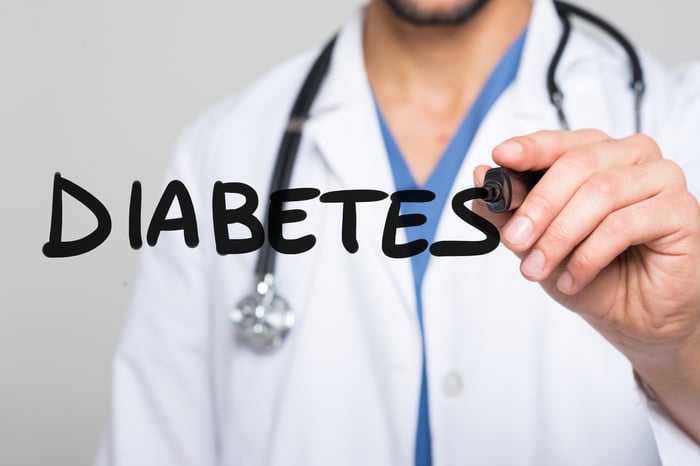 The consensus Wall Street one-year price target for Senseonics represents a 55% increase over the current stock price. That would be a huge improvement over the medical device stock's performance in 2017, with Senseonics' share price dropping slightly last year.

Senseonics makes the Eversense continuous glucose monitoring (CGM) system. Eversense is an implantable sensor that lasts up to 90 days. It comes with a transmitter that sticks to the skin on a patient's arm and a mobile application that runs on iOS and Android platforms. Eversense notifies patients when blood sugar levels are low or high through the mobile app and by the transmitter vibrating on their skin.

The company is still awaiting FDA clearance of its device but has already received European approval for Eversense. Senseonics teamed up with Rubin Medical to market the system in seven Scandinavian countries and with healthcare giant Roche to market Eversense in the rest of Europe, Middle East, and Africa.

There's no question that the potential for CGM is huge. In the U.S. alone, nearly 7 million patients are on insulin, but only 250,000 or so use CGM systems. Senseonics claims that Eversense has the highest accuracy, longest sensor life, and best convenience of any CGM on the market. If the company wins its anticipated FDA clearance, Wall Street's target for the stock just might be attainable.

Lexicon Pharmaceuticals stock could more than double if Wall Street analysts' price targets aren't too far off. If that happens, it would be a night-and-day difference between 2018 and 2017, when Lexicon stock plunged nearly 29%.

Lexicon and its partner, Sanofi (NASDAQ:SNY), expect to submit for approval of sotagliflozin in the U.S. and Europe for treating type 1 diabetes in the first half of 2018. The two companies have already announced positive results from a couple of late-stage studies. Late-stage studies for type 2 diabetes are also now under way. The earliest of these studies should wrap up in 2019.

If sotagliflozin wins approval, market research firm EvaluatePharma projects the drug could reach sales of nearly $1.2 billion by 2022. However, potential approval probably won't come until 2019. Wall Street could be right on the price target for Lexicon, but the timing might be a little off.

MannKind could be the biggest diabetes stock of 2018 if Wall Street projections are accurate. The consensus one-year price target for the biotech reflects a massive increase of over 170% from MannKind's current share price. For a short period last year, MannKind was one of the hottest biotech stocks on the market. However, its run fizzled out, and the stock ended the year down 27%.

The company gained FDA approval of its inhaled insulin product, Afrezza, back in 2014. MannKind lined up Sanofi as its commercialization partner for the drug. After a disappointing launch, though, Sanofi handed Afrezza back over to MannKind in early 2016.

In November, I interviewed MannKind CEO Michael Castagna, who wasn't with the biotech during the period when it partnered with Sanofi. He stated that his view is that Afrezza wasn't a top priority for the French drugmaker. Castagna has also predicted that a label update the FDA approved in October should boost Afrezza sales in 2018. MannKind's direct-to-consumer marketing for the drug could also make a difference.

If Castagna's predictions are right, Wall Street's price target could also be right. However, MannKind will almost certainly conduct one or more stock offerings this year to raise additional cash. Dilution to the value of existing shares could prevent Wall Street's optimism from being realized.

Abbott stock soared nearly 50% last year. The company won FDA clearance for its FreeStyle Libre GCM system in September. It's the first FDA-approved CGM system that doesn't require a finger-stick blood sample. And unlike Senseonics' Eversense system, FreeStyle Libre doesn't have to be implanted beneath the skin.

Investors should also like Abbott's dividend, which currently yields 1.9%. The company has increased its dividend for 45 consecutive years. I expect that streak to continue -- and for Abbott stock to generate solid gains in 2018.