The stock market is on a remarkable run, which has been great news for long-term investors that have had their skin in the game for the past eight years. But for investors putting new money in today things appear to be a bit dicey. The market is expensive, and no one wants to see their investment immediately plunge on the back of a market correction.

While truly Foolish investors needn't worry about trying to time the market, investing in solid, dividend-paying stocks is a great way to keep your emotions -- and portfolio -- in check. Today's competitors -- Procter & Gamble (NYSE:PG) and Unilever (OTC:UN) -- are two such companies. 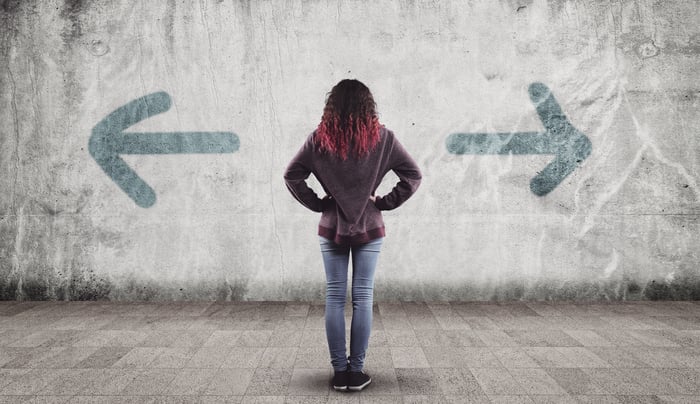 While we can never know with 100% certainty which stock will outperform over the long-run, we can get a better idea of what we're paying for by evaluating them through three different lenses.

If you're a long-term, buy-to-hold investor -- and we think you should be -- there's nothing more important for you to evaluate than the sustainable competitive advantage of the underlying company that you're buying. This advantage is often referred to as a "moat."

The easiest way to define a moat is the "special something" that keeps customers coming back to you -- and not your competition -- year after year. For both Procter & Gamble and Unilever, the key moat is the power of their respective brands.

Procter & Gamble is parent company to several billion-dollar brands, including Crest toothpaste, Gillette razors, and Pampers diapers. Gillette and Pampers both make the Top 100 of the Forbes annual list of the top brands in the world at 29th and 48th, respectively, with a total brand value between the two of $28 billion.

Though it doesn't necessarily relate to the company's moat, Procter & Gamble's shareholders endured a somewhat tumultuous year. The company dealt with a hostile active investor, and sold off several non-core businesses.

Unilever, on the other hand, owns both consumer packaged goods brands like Procter & Gamble and several brands in the food category. Dove soap, Axe deodorant, Lipton tea, and even Ben & Jerry's ice cream all call Unilever their parent company. After a failed merger attempt by a rival, Unilever had a solid 2017, with shares gaining 25% on the year.

When all is said and done, each of these companies has as strong a moat as you can expect since it is provided by brand value.

Dividends are foremost on the minds of most investors putting their cash behind these companies, so it makes sense that most would like to see excess cash being returned either via payouts or share buybacks.

But there's something to be said for keeping a boring old pile of cash on hand. That's because every company, at some point or another, is going to endure difficult financial circumstances. If a company enters such a period with a robust war chest, it can actually emerge stronger by buying back shares on the cheap, acquiring rivals, or simply offering lower prices to bleed the competition out while gaining long-term market share.

Keeping in mind that Procter & Gamble has a market capitalization 45% larger than Unilever's, here's how the two stack up.

Both companies have very strong free cash flows, which is what we'd expect from two globally scaled companies that enjoy the pricing power that these brands afford. Unilever, however, is using far more leverage than Procter & Gamble, which makes me believe that it is in a slightly more fragile state than its competitor should a recession hit.

Finally, we have valuation. Unfortunately, there's no one metric that will tell us if a company's stock is cheap or expensive. Instead, I find it best to consult a number of data points to paint a more holistic picture.

In terms of both ratios (P/E and P/FCF) and dividend data points, these two companies are virtually identical. When we bring growth prospects into the equation via the PEG ratio, however, Unilever emerges as the winner. It is trading at a 35% discount to Unilever, and so it wins this category.

So there you have it: we have a tie. When this is the case, I usually side with the company with the wider moat. Here again, however, we're stuck.

And so, to declare a winner, I'm going to go with Unilever, for this reason: as consumer packaged goods become more personalizable and scale matters less, trust in brands that provide food will be more and more important. Unilever relies on foods for more of its sales, so it -- very slightly -- earns my nod.

But to be honest, I'm not a huge fan of either stock. While they both offer outsized dividends, I'm not convinced they aren't already priced to perfection given their growth prospects, which is why I own neither, and refuse to give either a "green thumb" on my CAPS stock-picking profile.