These "Commercial Crew" contracts were identical, that is, except in price. Although each company was hired to conduct one manned test flight followed by between two and six crewed missions to ISS, Boeing would be paid $4.2 billion for these services. SpaceX would receive only $2.6 billion -- a 38% discount to Boeing's price -- for exactly the same work.

At the time, this seemed a terribly unfair deal for SpaceX. But now it's starting to look like Boeing may deserve the premium price it was awarded. Despite promising NASA to build, test, and begin launching its Crew Dragon spacecraft faster than Boeing could, it now appears that SpaceX has fallen behind Boeing in its development work. 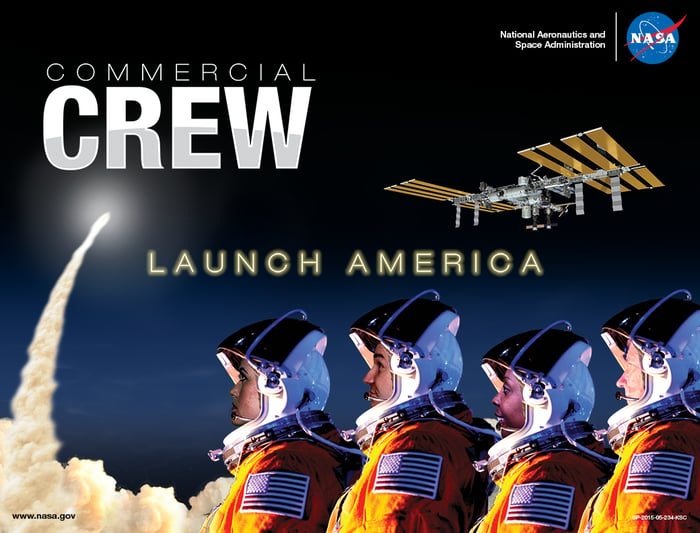 An-tic-a-pation! How long will Boeing and SpaceX make these astronauts wait for a rocket ride? Image source: NASA.

SpaceX initially targeted a third-quarter 2017 launch date for Crew Dragon's first manned test flight, as did Boeing. But it wasn't long before this deadline began to slip. First Boeing postponed to early 2018, then SpaceX followed suit. It's been a slippery slope ever since, with the two companies repeatedly pushing back their respective target dates for returning America to space. SpaceX always seemed to hold a small lead over Boeing, however, with SpaceX target dates preceding Boeing's by at least a few months.

That finally changed, however, when NASA released its latest update on targeted test flight dates for the two carriers. On Jan. 11, for what appears to be the first time ever, NASA announced a schedule that shows Boeing taking the lead in the race to return America's manned space program to orbit.

SpaceX's uncrewed Crew Dragon test flight, on the other hand, has been pushed back to August 2018... with a December 2018 target for its first crewed test flight.

Result: Boeing, the recipient of (much) more money for Commercial Crew, is finally starting to look like it might be worth the premium price. It's leapfrogged SpaceX to promise a manned space launch a month ahead of its rival.

How much is a month worth?

Granted, NASA's willingness to pay Boeing $1.6 billion more for six Starliner flights than it pays SpaceX for six flights by Crew Dragon still seems excessive. We're only talking about a few weeks' difference in initial capability, after all. And there's always the possibility that SpaceX will make up the difference in time, and begin launching crewed flights just as regularly as its rival after the first test flight is out of the way. Still, NASA's willingness to pay for even marginal outperformance (and even debatable performance -- both companies are still overdue on their initial deadlines -- has an economic rationale.

Last month, NASA was forced to ante up about $75 million a seat to pay for three more "seats" on Russian Soyuz spacecraft -- precisely because Boeing and SpaceX have both fallen behind schedule on building their spacecraft. At that price, a single four-seat flight on either Starliner or Crew Dragon could theoretically be worth up to $300 million to NASA in costs avoided.

The sooner Boeing or SpaceX gets a spacecraft in orbit, the sooner NASA can stop cutting checks to the Russians. And the sooner both Boeing and SpaceX start flying simultaneously, the sooner NASA can pit its two American contractors against each other in a price war, to see who can deliver the best service at the best price -- and drive prices down even further.