Three months ago, Boeing (NYSE:BA) took a step into the 21st century, buying a small manufacturer of vertically launching-and-landing, electrically powered, optionally piloted drone aircraft. We still don't know how much Boeing paid for this acquisition, but we do know that it's already paying off.

In November, I talked a bit about Boeing's new prize -- Aurora Flight Sciences -- after the now-Boeing subsidiary won a small NASA contract to conduct a "comprehensive evaluation" of a new concept for supplementing conventional gas turbine airplane engines with turboelectric booster engines attached to an aircraft's tail. If the concept pans out, it could boost airplane fuel efficiency by as much as 50%, and pose a severe challenge to Airbus' ability to compete with Boeing on fuel efficiency.

That risk to Airbus, however, is still some years down the road. In contrast, Boeing's latest bit of Aurora-oriented good news has a much more immediate dollars-and-cents effect. On Jan. 3, the U.S. Air Force announced that it has awarded Aurora a $48 million contract to fund continued development of its Orion Unmanned Aircraft System (UAS). 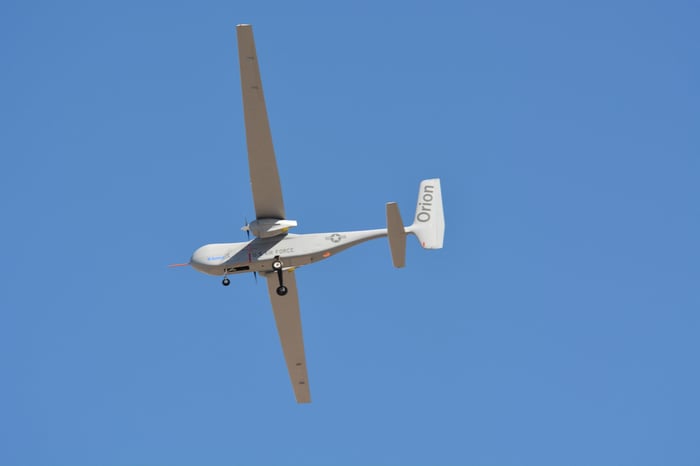 Between all the Ravens and Reapers, Predators, Global Hawks, and Fire Scouts buzzing around the skies these days, you might think the Pentagon has all the drones it needs by now. The Air Force begs to differ, however. And in fact, in the Orion UAS it may have hit upon something a bit better than the ordinary.

As Aurora explained in its press release describing the USAF award, Orion set the world endurance record for Medium-Altitude, Long-Endurance unmanned aircraft in December 2014, flying unrefueled for 80 hours, 2 minutes, and 52 seconds. Aurora's latest version of Orion beats that record by 25%, with the company boasting that its new and improved Orion "can stay aloft over 100 hours at a time with payloads in excess of 1,000 pounds."

Once approved for operational use, Orion should be able to fly unrefueled for twice as long as a General Atomics Predator, and three times as long as a Northrop Grumman Global Hawk. Granted, Orion's payload will be smaller than its rivals'. But assuming the drone is tasked more with surveillance work than with carrying bombs (which are designed to be dropped, in any case, at which point any mission ends early), that shouldn't be an issue. Orion could launch and remain aloft for four days at a time, taking snapshots, eavesdropping on electronic communications, and generally surveilling an area -- basically operating as a cheap, low-altitude spy satellite with wings.

Or, as the company describes it on its website, Orion could launch from its home airfield, travel 3,000 miles to its target, and surveil it continuously for two days before needing to return to base. Orions stationed on Guam, for example, would be able to provide continuous overwatch of not just the South China Sea, but all of China proper, without putting a single U.S. pilot at risk. Orions operating out of Aviano Air Base in Italy could perform the same mission in the Persian Gulf.

It's not hard to see how the Air Force would find such a capability attractive. And it's not hard to imagine what the demand for this new drone will become once Aurora succeeds in boosting its range. It's really not hard at all to see how Boeing could profit from satisfying that demand.

How much might Boeing profit? That's really hard to say. Currently, drone sales (primarily small ScanEagle and Integrator drones) are such a small part of Boeing's business that the company doesn't even break them out separately in its 10-Q filings with the SEC. That could change with Boeing's latest reorganization creating an autonomous systems division within its defense business. Until Aurora begins bringing its new drones to market, though, and until they begin contributing significant revenue to Boeing's top line -- and until Boeing begins reporting that revenue as its own line item -- investors will have to navigate by guesswork.