LG Display by the numbers

However, the fourth quarter showed a huge slowdown compared to the full-year figures. Here, top-line revenue decreased by 10% in South Korean currency to stop at 7.1 trillion won, or $6.6 billion dollars. Earnings plunged from 825 billion won to 44 billion won, or $760 million to $38 million dollars. That's a 95% earnings drop in the all-important holiday quarter.

Management explained that big-screen panel prices started to fall in the third quarter, driving unit prices close to the production cost by the end of the year. In particular, the market for large LCD television screens is becoming saturated by a multitude of international rivals. Moreover, LG Display boosted both its marketing and R&D budgets in the second half of 2017 in order to support a larger OLED business in 2018 and beyond. 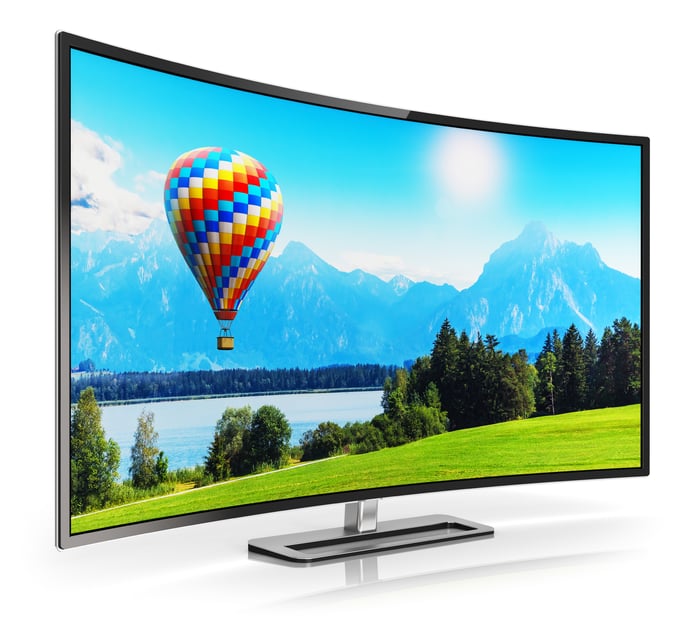 Big, beautiful, curved, transparent -- most of all, LG Display wants you to think of OLED screens as a "premium" product. Image source: Getty Images.

To work around these pricing issues, LG Display wants to position itself as a provider of premium products with a higher profit margin. The company shipped 1.7 million OLED TV screens in the fourth quarter while also starting up a new OLED production line to handle smaller smartphone and tablet orders.

LG Display CFO Don Kim expects panel prices to stabilize by the end of the first quarter, but the heavy OLED focus will absorb plenty of cash this year.

"In 2018, we will speed up our shift to an OLED-focused business structure in order to strategically prepare for the future by investing around [9 trillion won]," Kim said in a prepared statement. For those keeping score at home, that's an $8.4 billion OLED investment. We already knew that Apple (NASDAQ:AAPL) will fund some of LG Display's OLED expansion efforts, but this is a new and much larger number.

All of this is music to my ears as an investor in OLED technologist and LG Display supplier Universal Display (NASDAQ:OLED).

Strangely, Universal Display shares closed 5% lower on Tuesday despite this indication of solid demand for its products and services. If you've been looking for an entry point into one of my most profitable long-term holdings, this baseless dip might be it.

That being said, LG Display also looks like an interesting investment idea today. The stock is trading at less than six times trailing earnings while the company lays the groundwork for a burst of OLED-based margin expansion. That's a steal in my book.