Please ensure Javascript is enabled for purposes of website accessibility
Log In Help Join The Motley Fool
Free Article Join Over 1 Million Premium Members And Get More In-Depth Stock Guidance and Research
By Eric Volkman - Jan 23, 2018 at 8:17AM

Shareholders of two prominent REITs, plus a storied New York City utility, are about to get a few more coins in their pockets.

Welcome to the first earnings season of 2018. Any earnings season is a good time for income investors. This is because many publicly traded companies declare fresh dividends either prior to or along with their quarterly results.

Some of these dividends, of course, represent increases from their predecessors. Last week, a clutch of raises were declared by prominent companies, among them being Realty Income (O 1.88%), Vornado Realty Trust (VNO 1.46%), and Consolidated Edison (ED 0.71%). 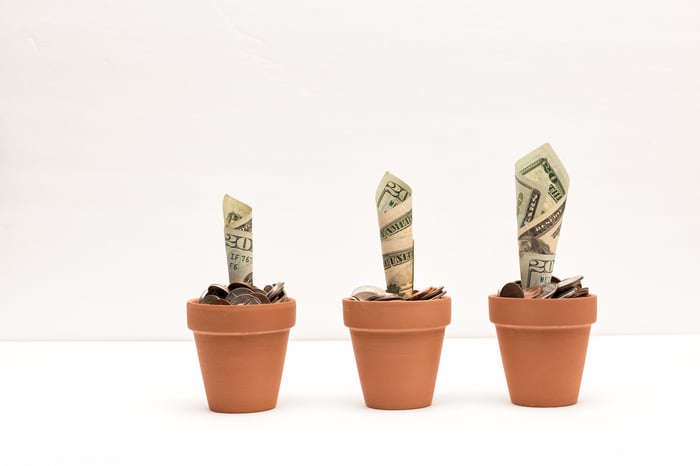 Monthly dividend distributor and frequent raiser Realty Income is at it again. Last week, the real estate investment trust (REIT) that specializes in retail properties declared a 4% bump to just under $0.22 per share. 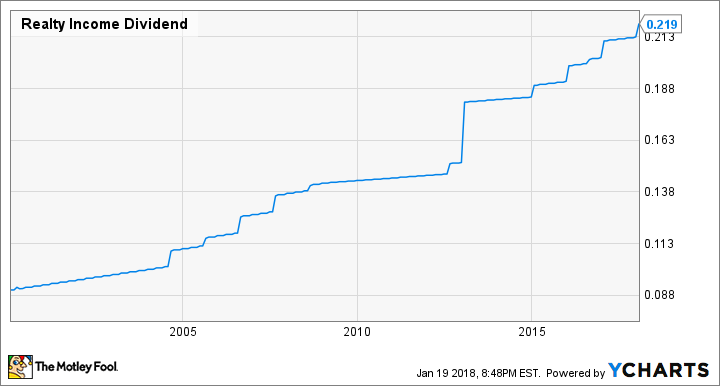 A longtime investor favorite, Realty Income lost some of its luster in 2017. Concerns about rising interest rates -- which can strongly impact REITs -- and the future of bricks-and-mortar retail dampened the stock's growth.

These worries are overblown. Thanks to its habit of locking its tenants into long-term leases that include regular rent increases, its business is humming along. In its third quarter, Realty Income's revenue was almost $307 million, a 10% improvement on a year-over-year basis. Adjusted funds from operations climbed by 15% to a bit under $214 million.

Occupancy remains high, at over 98%, and because of those long-term leases, most tenants aren't going anywhere anytime soon. The company might not necessarily be a dynamo -- it's guiding for 3% to 5% growth in AFFO for the current fiscal year -- but it's a steady and reliable operator.

Realty Income's looming payout will be dispensed on Feb. 15 to stockholders of record as of Feb. 1. It would yield 4.9%, which is considerably higher than the 1.8% average of dividend-paying stocks on the S&P 500. The new distribution has a payout ratio of 86% on that Q3 AFFO figure.

Staying in the REIT sector for the moment, New York City-focused retail and office specialist Vornado Realty Trust also lifted its quarterly dividend last week. The company decided to raise it by 8% to $0.63 per share.

Operating mainly in one of the most desirable markets in the world has supported Vornado's growth, particularly over the past few years. The REIT's Q3 saw it increase revenue by 5% to just under $529 million, with AFFO rising by 7% to nearly $189 million. 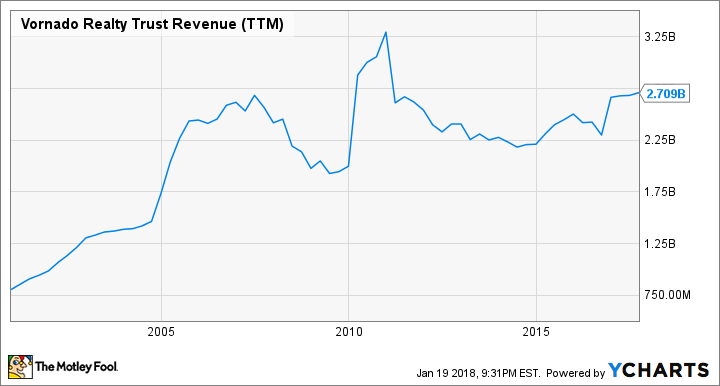 Underpinning this performance is a very attractive set of income-producing assets, including stakes in some of the highest-end (and most heavily trafficked) neighborhoods in the city. These include  Fifth Avenue, Chelsea, and Midtown. The company also has a pair of properties in San Francisco and one in Chicago.

New York's economy is particularly robust these days and likely to remain so, while its tourist count keeps breaking annual records. Both help support the company's continued strong performance.

Vornado's latest AFFO result boiled down to $0.99 per share, meaning that the new dividend would have an AFFO payout ratio of only 64%. This is far under 90%, the benchmark payout level of REITs (which are effectively required to distribute at least this percentage of their net profit).

The upcoming Vornado distribution will be paid on Feb. 15 to investors of record as of Jan. 29. It yields a theoretical 3.5% on the most recent closing stock price.

Because of their fairly predictable (and often strong) cash flows, utilities are prime candidates for long dividend improvement streaks. Exhibit A: Consolidated Edison, which has now been doing the annual raise thing for 44 years in a row. This makes it one of the market's relatively few Dividend Aristocrats. The new raise clocks in at nearly 4% over its predecessor, to slightly under $0.72 per share.

Like Vornado Realty Trust, Con Ed is a company strongly identified with New York City. It supplies electricity, natural gas, and steam (to a more limited extent) to the municipality. It also helps power Westchester County, the well-heeled enclave just north of the city.

Con Ed is a decoupled utility, so it won't suddenly see a major leap in revenue. But its customer base will never stop needing its supplies, so there's always going to be plenty of demand. Both revenue and net income were down slightly in the company's Q3 of fiscal 2017, but not to any worrying degree. Going forward, Con Ed is forecasting 2% to 4% growth in net profit for the full fiscal year.

As a utility, the company might not be the most exciting title on the market. But it's highly profitable and generates piles of cash. I wouldn't worry in the slightest about its status as a Dividend Aristocrat. 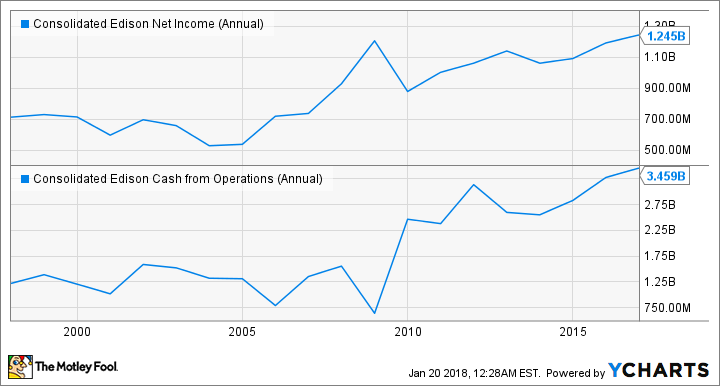 Con Ed's new distribution will be handed out on March 15 to shareholders of record as of Feb. 14. Its yield would be 3.7%.

These three were in the vanguard of January earnings season dividend raisers. More are sure to follow. As I said, this is a good time to be an income investor. Let's see what the rest of this earnings season brings.