Tuesday was another good day on Wall Street, with only a 4-point drop in the Dow Jones Industrials getting in the way of another clean sweep of major benchmarks setting new highs. The S&P 500 climbed a quarter percent, while the Nasdaq was up nearly three-quarters of a percent, lifted by strong earnings from a number of influential companies. Yet even with a generally positive mood among market participants, some stocks weren't able to join the rally. SunPower (NASDAQ:SPWR), Pretium Resources (NYSE:PVG), and Woodward (NASDAQ:WWD) were among the worst performers on the day. Below, we'll look more closely at these stocks to tell you why they did so poorly.

Shares of SunPower fell 6% after volatile trading in both directions over the preceding 24 hours. The solar producer's stock initially spiked in after-hours trading late Monday after the Trump administration announced that it would impose a less severe tariff on imported solar cells than initially expected, with initial rates of 30% falling to 15% by the fourth year and provisions to allow imports of up to 2.5 gigawatts of unassembled solar cells without tariffs each year. Nevertheless, some had hoped that SunPower would escape tariffs more broadly, and so the news is still disappointing in that it's likely to hurt the solar company's business at least in the short run. 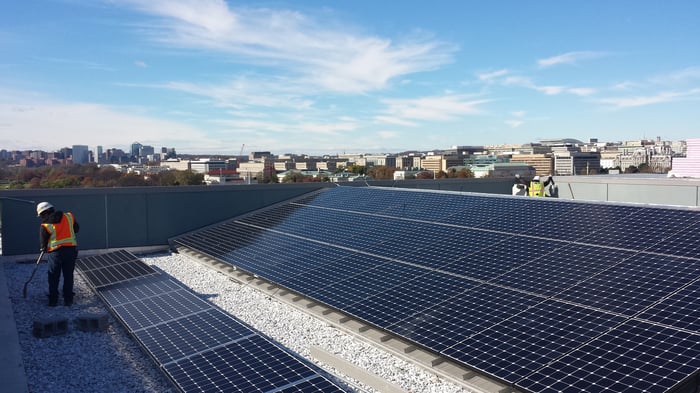 Pretium Resources stock crashed nearly 27% in the wake of the company's release of production results for a key mining asset and projections for the coming year. Pretium's Brucejack mine in northwestern British Columbia produced just over 70,000 ounces of gold during the fourth quarter of 2017, with a 95.8% gold recovery rate during the period. Yet those figures were down compared to what Pretium produced in the third quarter, and first-half projections of 150,000 to 200,000 ounces of gold for Brucejack suggests that worst-case scenarios could involve almost no improvement from what the mine generated during the first six months of its ramped-up production. All-in sustaining costs of $700 to $900 per ounce aren't unreasonable, but Pretium will want to focus on cost-cutting efforts in order to make the most of its high-grade mine.

Finally, shares of Woodward dropped almost 8%. The aerospace and industrial control systems manufacturer said that sales climbed 6% in its fiscal first-quarter financial report compared to the year-ago period, but earnings sagged by more than 60%. A one-time charge related to new U.S. tax laws was responsible for a portion of the bottom-line decline, but CEO Thomas Gendron also pointed to "ongoing challenges within our industrial segment" in holding back the company's progress. Woodward has high hopes that it will end up seeing substantial savings from tax reform, but investors want to see better profit performance from the fast-growing aerospace segment before they'll be entirely comfortable with the company's prospects.