Buying into the Wal-Mart story in 1970 would have been a lucrative move. The stock has gained about 150,000% since then, good for an annualized return of about 16.5%. Are there any stocks that look like Wal-Mart did in 1970? Wal-Mart itself fits the bill, with its aggressive push into e-commerce just getting started. Five Below (NASDAQ:FIVE) and Square (NYSE:SQ) are also contenders, both growing blisteringly fast. Here's what three of our Foolish investors think. 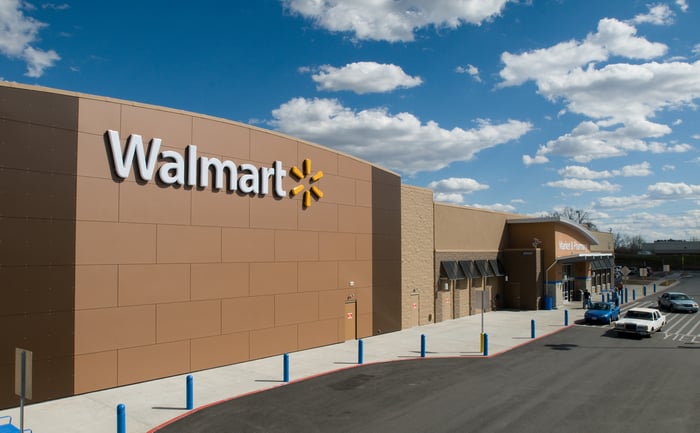 The next Wal-Mart is Wal-Mart

Tim Green (Wal-Mart Stores): Wal-Mart has grown into a dominant discount retailer over the past five decades. Over the coming years, the company will look to leverage that dominance to repeat the process for online retail. Wal-Mart is still in the early innings of its plan to become an equal to Amazon.com. So far, the company's progress has been impressive.

Wal-Mart is pushing forward on a few different fronts. It acquired start-up Jet.com in 2016 for about $3 billion, putting Jet CEO Marc Lore in charge of the entire e-commerce operation. Soon after, Wal-Mart rolled out free two-day shipping on orders above $35, with no membership fee required. This forced Amazon to get a little more generous with its own non-Prime free shipping offer.

On top of free shipping, Wal-Mart has vastly expanded its assortment of items on Walmart.com and implemented a pick-up discount initiative that gives shoppers a discount for opting to pick up some items at a store.

Wal-Mart is also focusing on online grocery, expanding its grocery pick-up service to more than 1,000 stores. This service is free, and the company is even testing a convenience-store concept centered around grocery pickup to give customers even more choices.

Leo Sun (Five Below): Wal-Mart grew like a weed in the early 1970s, because consumers wanted superstores that sold products at discount prices. Today, discount retailer Five Below -- which sells products that cost up to $5 -- is posting similar growth, thanks to its niche appeal and popularity with younger shoppers.

Five Below applies the dollar store model to "fun" products instead of essential ones, and this unique approach pays off. Last year, it posted 20% revenue growth and 24% earnings growth. Analysts expect its revenue and earnings to respectively rise another 28% and 38% this year. Much of that growth will be fueled by its expansion into new markets -- Five Below currently has 626 stores, but it sees a potential market of over 2,000 stores in the U.S. alone.

The bears often claim that Five Below's strategy of using store openings to drive its sales growth is unsustainable, but its 8.5% comps growth last quarter silenced many critics. If Five Below's management maintains this disciplined course, the company could evolve into a much larger retailer over the next few years.

Matt DiLallo (Square): Mobile-payments company Square is revolutionizing the retail industry. However, instead of selling goods for the lowest price, the company enables small retailers and other businesses to have access to the same tools as their larger counterparts for a much lower price. That's empowering these companies to increase sales and profitability.

Businesses have been rapidly adopting Square's suite of product offerings, which is fueling impressive revenue growth for the company, up 45% in the third quarter on an adjusted basis. That's an acceleration from the 41% increase in the prior quarter. However, the company is just getting started, given the continued shift toward a cashless society. In fact, credit card transaction volume is on pace to grow 54% by 2020, according to The Nilson Report, which should benefit Square by driving additional customers to sign on to its network even as volumes from legacy customers increase.

Square estimates that it currently controls about 3% of its addressable market, which it pegs at about a $26 billion revenue opportunity. However, in addition to expanding its share of that market, the company is building a suite of products to tap into an addressable market representing a $60 billion annual revenue opportunity. That massive upside is why Square still feels as if it's in the very early stages of its growth phase.