Please ensure Javascript is enabled for purposes of website accessibility
Log In Help Join The Motley Fool
Free Article Join Over 1 Million Premium Members And Get More In-Depth Stock Guidance and Research
By Tyler Crowe - Jan 24, 2018 at 6:47AM

We know what we're going to get from the LNG exporter, in terms of operations. It all comes down to the price you're willing to pay.

Shares of Cheniere Energy (LNG -1.91%) had a great run in 2017 and finished the year up 30%. The completion of construction at two of the company's liquefied natural gas (LNG) process trains, coupled with a little boost from high LNG prices, gave the company's stock a considerable boost. After such an impressive rise in 2017, though, one has to wonder if there is much value left in the company's stock for the coming year.

So let's do a deep dive into what investors can expect from Cheniere Energy over the next year or two and whether the company's stock price is an attractive entry point. 2016 and 2017 were incredibly exciting years for Cheniere Energy. Over the past 24 months, the company has completed construction of the first four liquefaction trains at its Sabine Pass LNG liquefaction terminal and revenue has started to pour in from operations. The company has benefited from completing construction ahead of schedule and high spot market prices for LNG, especially in China. While the company was in the commissioning stage, many of its LNG cargoes were sold on the spot market instead of the long-term contracts in place.

This period was so good, in fact, that management raised its guidance for EBITDA twice in 2017 and even announced a distribution increase for its subsidiary, Cheniere Energy Partners (CQP -1.73%). It was only a $0.01-per-share increase, but it's pretty impressive that it was able to do this so early in the construction phase.

With this phase of construction complete, Cheniere will probably have a dull year. According to management's construction schedule, Train Five at Sabine Pass won't be complete until August 2019, and the first two trains of its other LNG export facility, Corpus Cristi, will probably be operational between the second half of 2019 and the first half of 2020. This means that, aside from a revenue bump we might see from having Train Four go operational, this is what Cheniere's operations will look like for the rest of 2018.

One thing that is likely to happen, though, is a lot of financial moves to refinance its debt load and prepare for the next construction phases. From an investor perspective, this doesn't change much of the investment thesis, because it won't necessarily reduce its debt load initially. It could, however, delay any income tax payments for several years and allow the company to return capital to shareholders.

If there is anything investors should be on the lookout for in 2018, it's any announcements or updates on Cheniere's expansion plans. As it stands today, the company has an additional four liquefaction trains in various phases of permitting and obtaining commercial contracts -- three at Corpus Christi and one at Sabine Pass. Also, Cheniere has purchased several hundred acres of land adjacent to these facilities that could potentially double the production of these two plants if all of its current plans get completed.

Since we have a relatively good idea what Cheniere Energy will look like in 2018 and 2019, the question is whether the company's stock is worth the price it trades at today. Using conventional valuation metrics is more or less useless because, well, Cheniere has no net income to speak of. Also, an investment in Cheniere today is a bet on the company's completing construction of the remaining three liquefaction trains as well as any future upside from potential expansions.

While the chances these expansions will happen are less than 0%, let's for now,assume that an investor today will get only the future earnings power of the liquefaction facilities under construction. According to management's earnings guidance, these facilities will generate between $3.8 billion and $4.1 billion in annual EBITDA once fully operational.

Today, Cheniere Energy has an enterprise value of $40.2 billion. So, using that EBITDA guidance from management and today's stock valuation, you get a company valued between 9.8 times and 10.5 times estimated EBITDA in 2020 or 2021. I'll fully admit that this isn't an excellent valuation metric. Right now, though, it's the best one we have. 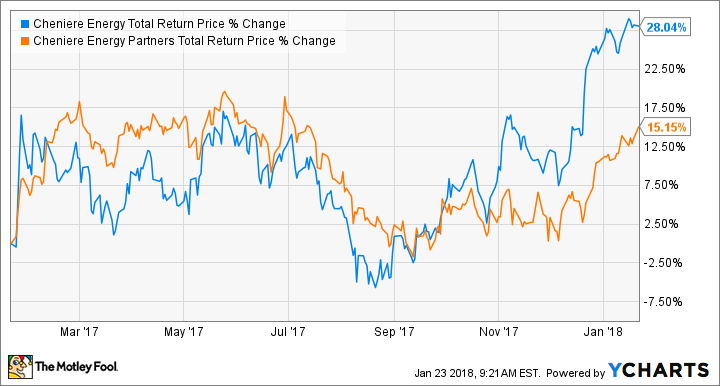 If we were to base our evaluation solely on the expansion plans currently under way, shares of Cheniere Energy aren't that attractive. Paying around 10 times EBITDA that isn't expected for another three years is a rather hefty price. If the company can bring some of those additional expansion plans to life in 2018, though, it would give the company a longer growth runway that could potentially make this stock more attractive.

If investors want to get in on Cheniere now and reap the rewards immediately, then perhaps it's worth looking at Cheniere Energy Partners instead. With all four liquefaction trains up and running, the company will pay a distribution to investors for the next three years while we wait for the rest of these growth plans to materialize. With a distribution yield of 5.7%, that is a decent return while you wait for Cheniere to make its next move.