Shares of The Medicines Company (NASDAQ:MDCO) were up as much as 12.7% today, although they pulled back a little to an increase of about 6.3% going into the closing bell. Investors can't complain too much, though; today's move continued a nice three-day run that has shares up 30% for the week.

All the excitement appears to be around the drugmaker's analyst day presentation yesterday.

The Medicines Company has a few drugs on the market, but investors are most excited about inclisiran, an RNAi drug it's developing with Alnylam Pharmaceuticals (NASDAQ:ALNY). The drug lowers the expression of a protein called PCSK9, which, in turn, produces lower bad LDL cholesterol.

Targeting PCSK9 isn't novel -- Amgen's Repatha and Regeneron Pharmaceuticals and Sanofi's Praluent both use the same mechanism of action -- but The Medicines Company thinks inclisiran is potent enough that it will only have to be dosed once or twice a year. In the Orion-1 trial, during the maintenance phase of six months between dosing, the average LDL cholesterol was reduced by a time-averaged 51% for the time between the doses compared to the starting level. When the maintenance was pushed out to once a year, the average LDL cholesterol level was reduced by 43%.

Repatha and Praluent are antibodies that have to be dosed monthly during the maintenance phase of treatment, so inclisiran should have an edge even if it can only produce equivalent reductions in LDL cholesterol. 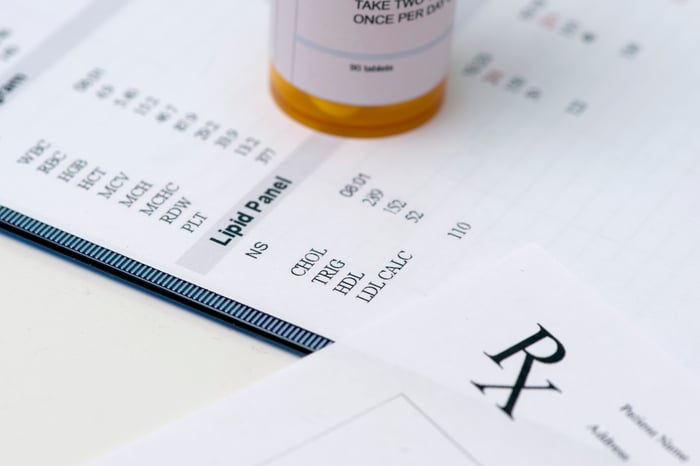 In addition to a long review of the data and the market potential, The Medicines Company also released some new data from the Orion-2 trial in patients with a genetic disease that causes then to have life-threatening levels of cholesterol where inclisiran reduced LDL cholesterol by about 40% 90 days into the maintenance phase.

What investors might be most excited about is the speed at which The Medicines Company was able to enroll its phase 3 program. The company was shooting for enrolling the 1,500-patient Orion-11 trial in 28 weeks, but it completed enrollment in 11 weeks. While the speed doesn't tell you anything about whether the phase 3 data will continue to be good enough to gain regulatory approval, it does show that the patients are excited about testing it out, which should bode well if inclisiran makes it to market.

Of course investors have plenty of time to buy in before then; even with the faster enrollment, management is guiding for launching about three years from now.