Income investors should definitely consider midstream master limited partnerships (MLPs) as part of their portfolio. In addition to certain tax advantages, MLPs are designed to pay out large distributions to their unitholders.

Two MLPs paying nice, fat yields right now are Holly Energy Partners, L.P. (NYSE:HEP) and Phillips 66 Partners (NYSE:PSXP). But which one is likely to give investors the best bang for their buck? Let's compare these two MLPs to see which looks like the better buy. 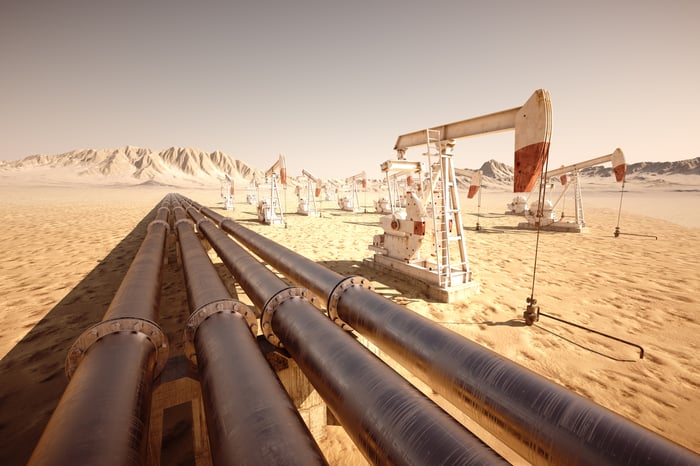 Both of these oil and gas industry players have purchased interests in major U.S. pipelines recently. Which is the better buy? Image source: Getty Images.

First of all, neither Holly Energy Partners nor Phillips 66 Partners should be confused with its parent, HollyFrontier Corporation (NYSE:HFC) and Phillips 66 (NYSE:PSX), respectively. Neither parent is an MLP, and although Phillips 66 holds some midstream assets, it and HollyFrontier are primarily engaged in refining oil into gasoline and petrochemicals. Also, while the parent companies do pay dividends, their yields are nowhere near as high as their MLP subsidiaries' distribution yields.

Phillips 66 Partners currently yields about 4.4%, but that return is walloped by Holly Energy Partners', which returns a massive 7.9%. It would seem like Holly's the obvious winner here, but there are other aspects to a distribution than current yield. Investors also need to ask if that yield is sustainable, and if it's likely to grow.

Not included in those earnings were two new acquisitions for Phillips 66 Partners. In October 2017, it completed two big acquisitions from its parent: Merey Sweeny, a company that owned fuel-grade coke processing units at the Phillips 66 Sweeny Refinery, and a 25% interest in the Bakken Pipeline (which includes the Dakota Access Pipeline). This represented the company's largest acquisition to date and should keep the company growing at a healthy clip.

Meanwhile, Holly Energy Partners is finalizing some acquisitions of its own: the remaining interest in the Frontier Aspen Pipeline and the Salt Lake City Pipeline. The two pipelines comprise a 384-mile route for crude oil from Casper, Wyoming, to Salt Lake City-area refiners. The transaction should generate about $23 million in annual EBITDA, and the company paid in cash, rather than taking on additional debt.

I'd expect both companies to continue to make acquisitions and see earnings growth in 2018, but I think Phillips' share of the Bakken Pipeline is going to be particularly beneficial to the company, so I'm going to give it this category by a hair.

Because energy infrastructure MLPs are high-depreciation businesses, trying to evaluate their value only makes sense if you use a metric that strips out depreciation. So, let's look at the companies' enterprise-value-to-EBITDA ratios: 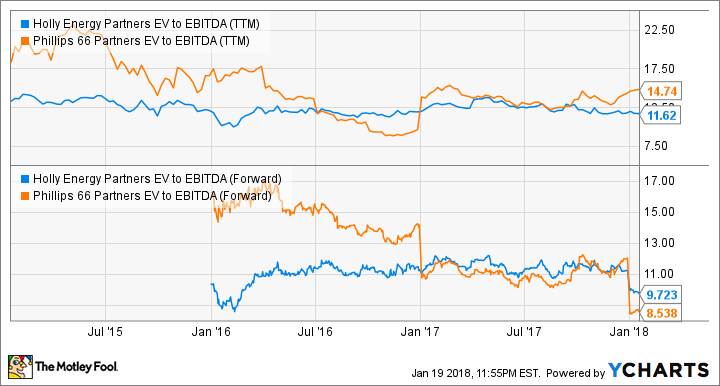 Interestingly, the companies' scores by this metric -- lower is better -- diverge depending on whether you're looking at them on a trailing-12-month or forward basis. Holly's trailing EV to EBITDA ratio of 11.62 is three points lower than Phillips 66's 14.74, but Phillips 66's forward-looking EV to EBITDA ratio -- which is based on company projections -- is lower than Holly's.

This is a tough one to call, but I'm going to go with the established numbers rather than the projections, since projections can be off...and sometimes way off!

It's a close call, for sure, but Holly Energy Partners wins this match-up, largely by virtue of its big but stable dividend.

However, both companies pay a solid yield for income investors, and they look poised to continue to grow earnings -- and thus, distributions to unitholders -- in the coming year. Phillips 66 Partners isn't a bad investment choice, it's just that Holly Energy Partners is a better one right now -- so much better that I'm making a CAPS pick of Outperform.