In an era of cord-cutting and streaming television, it's becoming increasingly apparent that content is king. More than a year ago, AT&T announced its intention to acquire Time Warner. The first item mentioned in the press release (aside from the terms) was "Time Warner's vast library of content and ability to create new premium content".

The importance of content couldn't be clearer, and for that reason, speculation is running rampant that further consolidation in Hollywood is inevitable. Could Lions Gate Entertainment (NYSE:LGF-A) (NYSE:LGF-B) be next? 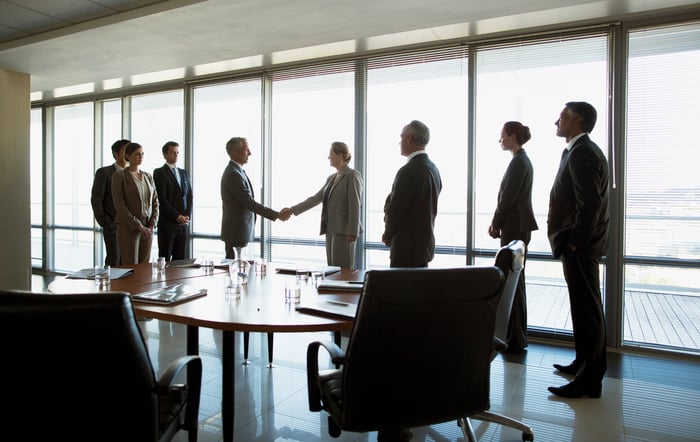 Could Lions Gate be the next media industry buyout? Image source: Getty Images.

Is the writing on the wall?

Late last week, Lions Gate stock jumped on rumors that there were already potential suitors approaching the smaller studio. Lions Gate is home to profitable franchises like Hunger Games, The Twilight Saga, and Saw, as well as stand-alone hits like La La Land. The company's television unit created award-winning fare such as Orange is the New Black and Mad Men. Lions Gate has a library of 16,000 titles that span both film and television, partially owing to its acquisition of Starz in 2016.

Its size also provides a certain appeal to potential acquirers. Its market cap of just $7 billion makes it an attainable target for a variety of buyers, including Amazon, Verizon, CBS, and Viacom, according to a report from Deadline Hollywood.

Both CBS and Amazon would leverage the content library, boosting each company's streaming efforts. Verizon has been gearing up for an as yet unannounced over-the-top streaming service, according to TechCrunch. This is in addition to the company's ad-supported Go90, which has seen limited success. Lions Gate has a similar model to Viacom, creating content across a range of film and television brands.

Walt Disney is a nearly perfect example of the conundrum facing modern media companies: Change or be left behind. With its ESPN sports network and cable channels suffering the ill-effects of cord-cutting, and anchored firmly in a fading business model, Disney has made several moves to take back control of its destiny.

The company has acquired controlling interest in streaming company BAMTech, which will allow the company to bypass creating a system from scratch. Disney will use the latter's technology to stream its own content, with plans to create two streaming services over the next two years -- one dedicated to sports and one composed of content from its Disney, Marvel, Pixar, and Lucasfilm studios.

Disney's plan to acquire Fox also accomplishes several strategic goals. By gaining a controlling interest in Hulu, Disney gets the third largest streaming service in the U.S., providing the company with another entry in the high-growth streaming market. And it would finally regain control of it prodigal Marvel properties X-Men, The Fantastic Four, and Deadpool, as well as movie assets like Avatar, and television hits The Simpsons, Modern Family, and This Is Us. Again, it's all about the content.

Will the Lion roar?

It's important to note that at this point, it's all rumors and speculation. No parties have confirmed talks or acquisition plans as of this writing.

Any company with streaming aspirations will need to create a niche or control a wide assortment of programming in order to compete. Streaming pioneer Netflix recently reported a subscriber base of 117 million worldwide, and it plans to spend between $7.5 billion and $8 billion on content in 2018. Competitors are ramping up their spending as well.

Lions Gate would make a prize feather in the cap of any company seeking to increase its library, which is more important than ever in today's media landscape.