Wednesday was a pretty nice day to be a shareholder of MarineMax (NYSE:HZO). After reporting "blowout" results for fiscal Q1 2018, MarineMax stock soared more than 15%. Shares of the recreational boat and yacht retailer are jumping again today, thanks to a new upgrade (to buy) from analysts at investment bank CL King. 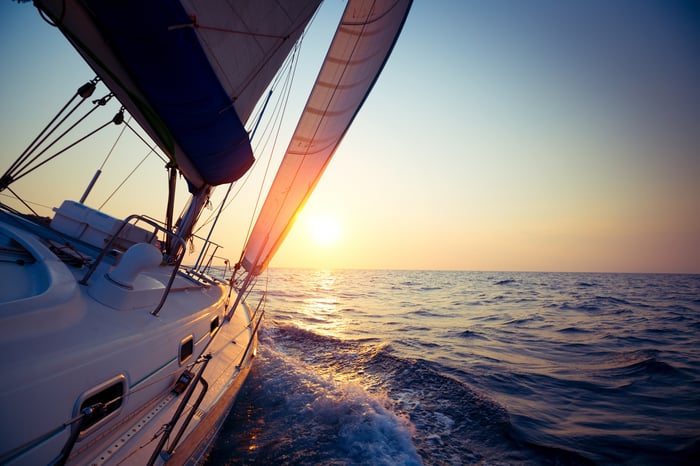 Heading into earnings Wednesday, analysts set a low bar for MarineMax to clear. Wall Street didn't expect MarineMax to earn anything in Q1, with the consensus estimate calling for a $0.01-per-share loss.

That's a pretty big beat, you have to admit. And even independent of its performance relative to analyst estimates, MarineMax's quarter looked pretty good. Sales grew 4.4% year over year in Q1, which management says is "typically the Company's smallest revenue quarter of the year."

Oftentimes, MarineMax says it loses money in Q1 (which explains why Wall Street was projecting a loss). This time, however, MarineMax says that "a healthy mix in product sales as well as an increase in our higher margin businesses" helped to lift the firm out of a sea of red ink and into the black.

MarineMax also benefited from the 2017 Tax Cuts and Jobs Act, which shaved more than 5 percentage points off the company's tax rate. At the same time, MarineMax says it did have to take a $0.04 charge to earnings for a reduction in the value of its net operating loss carry-forwards. Absent that charge, earnings would have been even higher.

Mincing no words, CL King described MarineMax's performance as "blowout" results in the upgrade covered on TheFly.com this morning. MarineMax shares soared Wednesday (and are rising again today) in response to the big earnings beat. Yet even after the spike in share price, MarineMax stock has gained less than 14% over the last 52 weeks -- against a rise in the S&P 500 of more than 23%.

In CL King's view, this leaves MarineMax stock still attractively priced. As the analyst explains, "big boat/yacht sales" are "firming industry wide." At MarineMax in particular, profit margin is strengthening. The operating profit margin in Q1 2018 for example, was 2.7% -- up from last year's Q1 profit margin of 2% -- and the company is "building momentum." CL King predicts that even after this week's run-up, MarineMax shares could rise to "even higher levels in the months ahead" -- perhaps as high as $28, which would represent a 17% profit over today's price of $24 a share.

Is CL King right? Is there still time to buy MarineMax even after the shares' strong performance on Wednesday? Perhaps.

Valued on MarineMax's $25.1 million in trailing earnings, the stock currently sells for only a little more than 20.5 times earnings, which doesn't seem expensive at all in light of S&P Global Market Intelligence predictions that earnings will grow at 30% annually over the next five years. And MarineMax's forward P/E could be even cheaper.

Based on management guidance that it expects to earn GAAP profits of between $1.30 and $1.40 per diluted share this year, the stock is currently selling for just 17.1 times this year's expected earnings. A move to $28 a share -- as CL King predicts -- would actually only hold the P/E constant at about 20 times earnings.

If MarineMax maintains the momentum it showed in Q1, the stock may deserve an even better multiple than that.