McCormick & Company (NYSE:MKC) closed out the final quarter of 2017 emphatically, as results released on Thursday revealed, but the components of the positive report may have caught investors pleasantly off-guard. McCormick reported a 21% increase in revenue versus the prior year. The market had anticipated double-digit top-line improvement from the company's August 2017 acquisition of Reckitt Benckiser Group's (OTC:RBGL.Y) RB Foods division. In this transaction, it obtained the venerable French's Mustard and Frank's RedHot (hot sauce) brands, among others.

Yet as the chart below indicates, the $4.2 billion acquisition of RB Foods wasn't the only factor pushing sales forward: 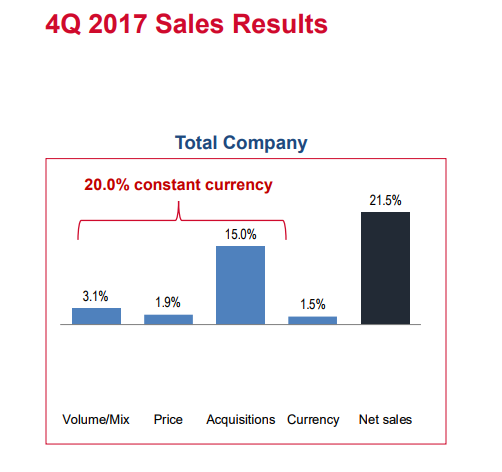 McCormick's 3% volume gain and 2% increase in overall pricing adds up to 5% organic growth during the quarter, which is pretty swift expansion for a condiments-based consumer packaged goods (CPG) company.

That McCormick managed to push volume while raising prices points to strong consumer demand. As I discussed in October, the organization rolled out 40 new products during the fall aimed at the foodie segment, from bone broths to ramen and soba noodles, via its Kitchen Basics and Simply Asia brands.

An increase of 10% in brand marketing also supported McCormick's higher revenue. Acquisitions of new brands, rapid product innovation, and increased marketing spend are all examples of the company's willingness to invest in itself.

They're also made possible by management's decision to curtail share repurchases for the time being, in favor of training available cash flow on the existing business, paying down debt from the RB Foods transaction, and entertaining further bolt-on acquisitions.

Despite a halt in share repurchases, the company is an extremely shareholder-friendly outfit. A Dividend Aristocrat, McCormick announced a dividend hike of 11% in November, its 32nd consecutive annual dividend increase. This pushes the company's dividend yield to roughly 2%, based on current share price, while maintaining a moderate payout ratio of 55%. 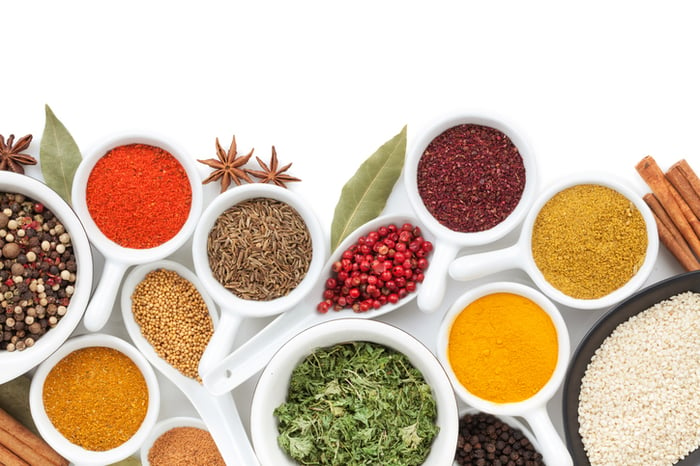 Despite incurring some inventory adjustment charges related to the RB Foods acquisition, McCormick & Company was able to increase gross margin slightly during the fourth quarter by 10 basis points, to nearly 45%. The company's traditionally healthy gross margin enables ample cash flow, and for the full year 2017, McCormick generated $815.3 million in operating cash, from $4.8 billion in revenue. This was a 24% pop in operating cash flow versus 2016.

McCormick is already utilizing its cash-generation ability to whittle down its obligations from the RB Foods deal. During the fourth quarter, the organization completed debt repayments of $350 million, lowering its debt-to-EBITDA ratio from 5.0 to 4.5. Management is aiming for a debt-to-EBITDA ratio of 3.0 by 2020.

This eagerness to pay down debt should please shareholders immensely. Many of McCormick's peers engage in huge share repurchases to prop up stock prices, and to keep their balance sheets leveraged, as heavy borrowings discourage potential activist shareholders from leaping in to challenge management.

But such a defensive posture often comes at a significant cost, as it robs corporations of resources which could be used to push innovations, invest in marketing, or snap up other companies.

McCormick's rapid debt-repayment goal constitutes an extremely wise use of cash flow. Within three years, management will be in a position to make a similar-sized acquisition, or more likely, two to three smaller ones in the $1 billion range. And McCormick may well snap up a few diminutive brands in the meantime, in the mode of its $127 million acquisition of Giotti in December 2016.

For those who can exercise patience and keep these shares for three to five years, McCormick & Company's window of growth may just be opening. As of late, the company has shown a keen eye for not only external investment, but internal investment as well.