One might have assumed that after last quarter's impressive results in the face of Hurricane Harvey, Union Pacific (NYSE:UNP) would produce a stellar fourth quarter. But while the company did post higher revenues and earnings, they weren't high enough to meet Wall Street expectations.

Beyond this short term issue, Q4 was a mixed bag for Union Pacific. So let's dig into the numbers to see what went well and what didn't in the quarter, as well as get a sense of what management expects in 2018. 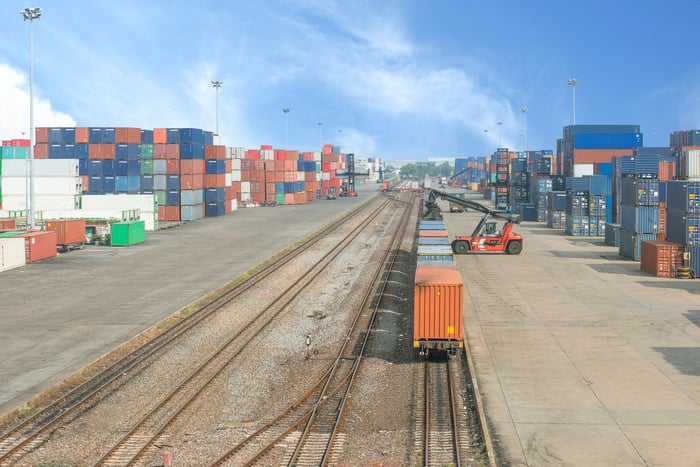 It's easy to get hypnotized by that incredible earnings per share number, but keep in mind that much of that result is related to the recent changes in the U.S. tax code that allowed Union Pacific to reduce its deferred tax liability by $5.9 billion. Dropping that liability off of the balance sheet is a one-time deal, and won't impact the cash flow of the company. Factoring out the tax savings, Union Pacific earned $1.2 billion, or $1.53 per share.

Now let's get into the nitty-gritty. The quarter's revenue gains came almost exclusively from its industrial products segment, where sales grew 28% on a 17% increase in volumes and a 10% boost in pricing. Shipping frack sand to the oil and gas business has been a booming business for Union Pacific, as most of the sand mines in the U.S. are in the Upper Midwest while most shale basins are west of the Mississippi, where Union Pacific shares a near duopoly with Burlington Northern Santa Fe.

Aside from industrial products, it was an up-and-down quarter as gains in chemicals and intermodal shipments offset declines in volume for agricultural products, automotive, and coal. 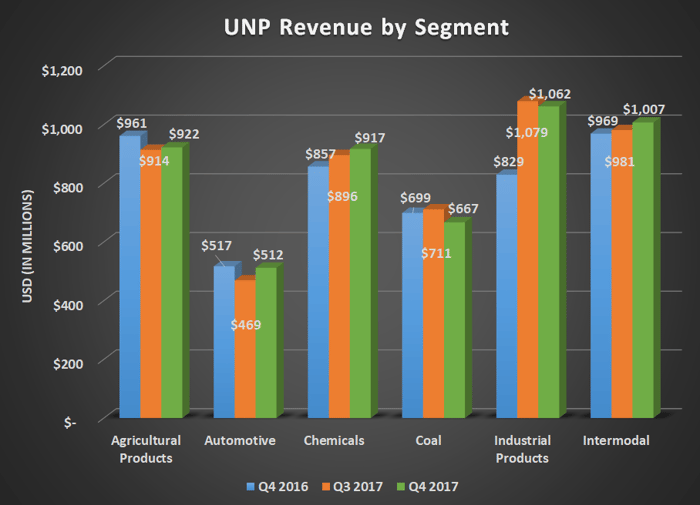 From an operations standpoint, things look good, but not necessarily as good as the reported numbers might make them appear. According to management, its adjusted operating ratios -- which factor out some one-time gains reported on its income statement -- for Q4 and the year were 62.6% and 63%, respectively. Those were improvements over the prior year's numbers, but the company did lose ground on some critical operating metrics like terminal dwell time and average train velocity. Hopefully, management will be able to correct its course with these metrics in 2018, because it will be harder to achieve efficiency gains as fuel prices rise.

If there is one thing to be a little concerned about, it's that Union Pacific's management seems a bit overzealous with its capital return program. Last quarter, the company repurchased $1.1 billion in stock, and increased its dividend by 10% for this year. Dividends and share repurchases represented 129% of net income for the year, and the company needed to issue debt to cover both capital spending and capital returns. We'll have to see if the cuts to corporate tax rates will free up enough cash to support these kinds of spending habits in 2018.

We are optimistic the economy will favor a number of our market segments leading to another year of positive volume growth. Increased unit volume, combined with inflation plus core pricing and G55-0 productivity initiatives, should result in another year of revenue growth and improved margins. We will continue to execute our value-track strategy to benefit our employees, partner with the communities we serve, provide our customers an excellent experience, and generate strong returns for our shareholders.

Just for reference, the G55-0 initiatives to which Fritz is referring involve management's long-term goal of reducing its operating ratio to 55% with a zero incident rate.

Also included in today's press release was guidance for 2018. Management expects rail volumes to increase in the low single-digit percentages, and believes it will be able to pass higher pricing on to customers to more than cover its cost increases. In the wake of the major cuts to corporate taxes that were passed last month, it expects its effective tax rate to be around 25%, and figures it will pay $1 billion less in cash taxes next year.

Union Pacific remains one of the most efficient railroads in the United States, but it is slowly losing ground as its competitors implement their own improvement plans. If management can hit its goal of a 55% operating ratio, that an incredible improvement would significantly boost earnings. After all, this is a high fixed-cost business. Getting there will be a challenge, though, and the company will probably have to do better than it has done if it is to succeed.

The cash freed up by the corporate tax cuts should allow Union Pacific to plow lots of money into capital spending and improve those operations,  and still leave it with funds to reward shareholders. If that scenario plays out as one would expect, then Union Pacific will likely remain a solid investment.