Slowly but surely, Norfolk Southern (NYSE:NSC) has been chipping away at its cost structure and improving its operations. There was a time when its operational efficiency -- as measured by operating ratio -- was the worst in the business by a long shot. Today, the efficiency gap between it and its peers isn't so large, and it's translating into much higher profits for the railroad company.

Let's look at Norfolk Southern's most recent quarterly results and see what we can expect from the company in 2018. 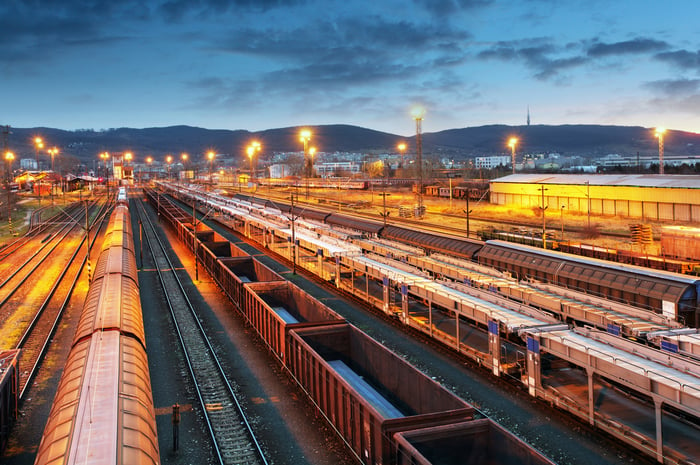 If you are looking for an industry that benefits immensely from the recent changes to the U.S. tax code, look no further than railroads. This past quarter, Norfolk Southern realized a $3.07 billion gain from a reduction in deferred tax assets liabilities. Norfolk Southern joins other railroad companies that have posted incredibly large net income results thanks to these tax changes.

Even without that one-time gain, this past quarter was a good one for the east coast rail company. Adjusted net income was $486 million -- $1.69 per share -- thanks to higher revenue from all three segments. The $667 million in intermodal was a record quarter for Norfolk Southern. 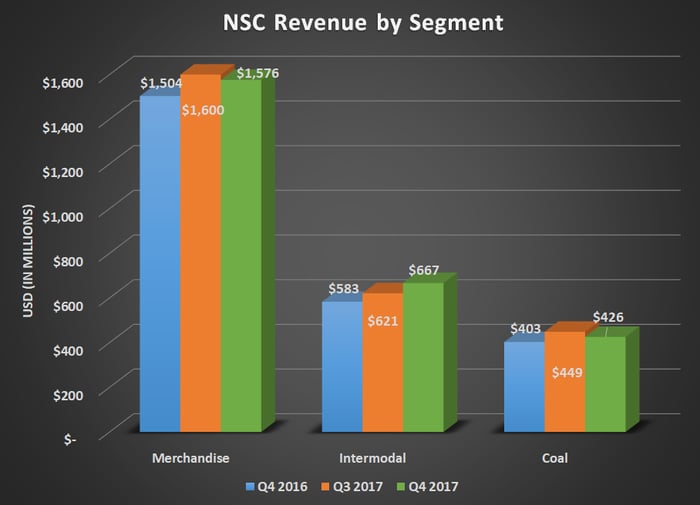 Even more important is that the company continues to cut costs and improve its operating ratio. It ended fiscal 2017 with an operating ratio of 67.4%, which is a company record. Because of population density in the East Coast, Norfolk Southern isn't going to likely ever achieve the low operating ratios of its Western or Canadian peers, but 67% is a great number compared to the 73% operating ratio it posted as recently as 2015. It was even able to achieve this despite the fact that cost for fuel continues to rise. As part of management's strategic plan, it intends to reduce operating ratio to 65% by 2020.

Norfolk Southern's recent gains have been impressive and are the result of several new investments, but some of those gains are at the expense of its most direct competitor: CSX (NASDAQ:CSX). CSX was already struggling with its turnaround program, but things got even worse last month when CEO Hunter Harrison passed away suddenly. This past quarter, revenue at CSX dropped 6% from lower shipment volumes.

CEO James Squires' statement in Norfolk Southern's press release was quite upbeat. On top of the future gains that the company will get from a lower tax rate, the company still has some levers to pull before the end of the decade to keep the good times going.

Norfolk Southern is open for growth, and we are optimistic as we head into 2018 that the current economic environment will provide an opportunity for continuing growth. The hard work and dedication of our employees in executing our Strategic Plan are clearly evident as we continue to achieve record results and deliver on the commitments we made to our shareholders. We remain steadfast in our commitment to deliver on the goals in our Strategic Plan, of which positioning ourselves for growth is a key element. We are laser-focused on execution of our strategy and are confident that we can achieve our targets by 2020 or sooner.

Included with Squires comments was management's guidance for 2018 capital spending. It will bump its capital budget by $100 million to $1.84 billion.

Norfolk Southern continues to quietly build a case that it is a great railroad stock that investors should consider. With CSX still reeling, it looks like Norfolk Southern is taking market share and improving its operating efficiency to generate loads of free cash flow. One concern for the next few years will be its coal business. Coal use has been on the decline for some time, and Norfolk Southern will need to grow its other two segments enough to replace coal revenues and grow the overall business. Under management's current plan, it expects coal revenue to decline 4% annually until 2020.

With shares trading at an enterprise value to EBITDA ratio of 11.7 times, Norfolk Southern remains one of the cheapest railroad stocks in North America. If management continues to deliver as it has recently, then shares today could be selling at a decent value.