Most major cryptocurrencies aren't moving much today, but new blockchain-based ETFs are attracting millions of dollars.

Bitcoin ETFs (exchange-traded funds) could still be a long way from listing on the major exchanges, especially since the Securities and Exchange Commission has recently expressed serious concerns about cryptocurrencies as an asset class. However, blockchain ETFs have launched and investors seem very interested; millions of dollars are flowing into them already.

Let's look at today's cryptocurrency prices, and a possible exchange hack that is putting pressure on two major cryptocurrencies. We'll also discuss what a blockchain ETF is and what it invests in. 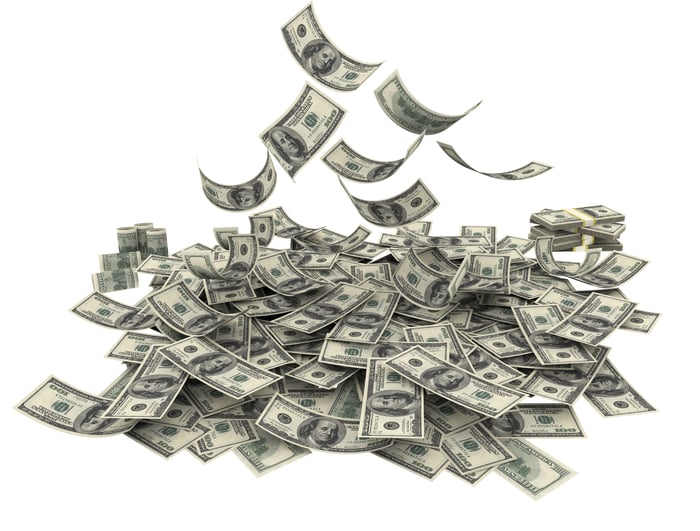 Data source: Investing.com. Prices and daily changes as of Jan. 26, 2018 at 12:30 p.m. EST; prices are rounded to the nearest cent where appropriate.

Ripple (XRP-USD) has been a major laggard recently. The cryptocurrency, which gained notoriety for its partnerships with companies like American Express and MoneyGram International, traded for as much as $1.70 last Friday, and now trades for 28% less.

The likely reason for the drop is the news that Tokyo-based cryptocurrency exchange Coincheck abruptly halted withdrawals earlier today. Rumors indicate that the exchange was hacked and could have lost hundreds of millions of dollars worth of cryptocurrencies -- particularly NEM, down 6.9% today, and Ripple (XRP-USD).

$240 million flows into blockchain ETFs in one week

A couple of blockchain-based ETFs launched last week, and to say that investors seem interested is an understatement. Since their launch, about $240 million has flowed into the two new funds.

So what is a blockchain ETF? Instead of investing in cryptocurrencies like bitcoin, blockchain ETFs invest in the stocks of companies that have substantial investments in, or involvement with, blockchain technology.

Here are a few examples of the holdings of these young ETFs, and why each one is included:

Notice that stocks like the Bitcoin Investment Trust and Riot Blockchain are not included. The new ETFs are not aiming to invest in cryptocurrencies themselves or funds that own them; nor are they speculating on unproven companies that have the word "blockchain" in their names. Rather, these ETFs are intended as investments focusing on established companies that could benefit from advances in blockchain technology.