Another set of earnings and another disappointment for General Electric Company (NYSE:GE) shareholders. Having updated investors on its turnaround strategy on a presentation in November, it was important for CEO John Flannery to demonstrate that a line has been drawn in the sand, notably on its ailing power segment, but the fourth-quarter earnings report failed to do this. That said, there were some good aspects to the earnings report, so let's take a look at four key takeaways -- two bad and two good -- from the presentations. 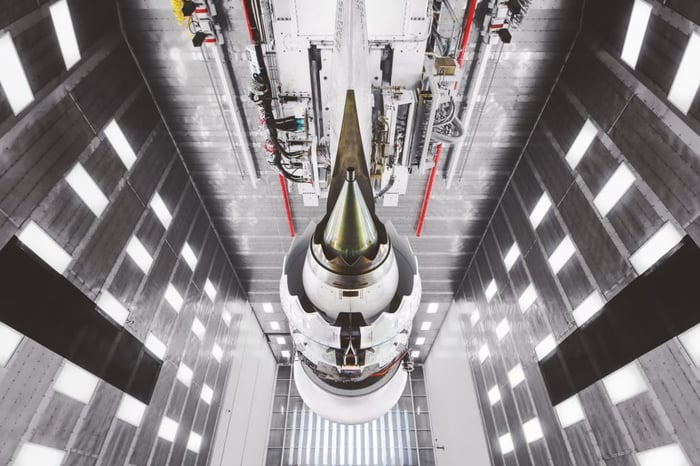 The news that the U.S. Securities and Exchange Commission (SEC) is investigating GE's insurance charge attracted a lot of the initial attention, but I would argue that it's not the key thing to be worried about.

In fact, the SEC is also investigating GE's long-term service agreements (LTSA) and how the company books revenue on them. GE has LTSAs in place for things like servicing power plants and jet engines, and it has the right to payment for products or services transferred to the customer. When these payments are unconditional, they go on the balance sheet as receivables, but when they involve some other obligation (excluding time), they are called contract assets.

In the case of GE, the company has been growing its contract assets -- meaning revenue and earnings are booked before the company receives cash -- and the SEC is now looking into how GE has been doing this. It's an issue investors' attention was drawn to after the first quarter of 2017 saw a $1 billion shortfall in cash flow generation. The worry is that the SEC might rule that GE's revenue reporting might have inflated revenue and earnings via its contract assets, particularly in its power segment.

Some of the nuances of GE's first-quarter earnings were revealed on the January 16th press release regarding the aforementioned insurance charge. From that press release, investors already knew that GE's EPS would come at the low end of guidance of $1.05 to $1.10, so it was no surprise when a figure of $1.05 was reported. On a more positive note, just as previewed on the previous press release, industrial cash flow from operations (CFOA) for 2017 came in ahead of guidance of $7 billion, but it was surprisingly strong at $9.7 billion, suggesting Flannery's efforts to improve cash flow generation are already bearing fruit.

However, power markets had been described as continuing "to be challenging" on the press release, and CEO of GE Power Russell Stokes added on the first-quarter earnings conference call: "We believe that total gigawatts awarded will be even softer than we thought in December, coming in below 35 gigawatts in 2017."

To put this into context, back on the second-quarter 2017 earnings call, former CFO Jeff Bornstein outlined expectations for the power market to decline to 40 gigawatts in 2017 -- clearly, GE underestimated the weakness of the power market in 2017, and management continued to do so even up to December 2017. Stokes went on to outline that he was "working to accelerate additional restructuring efforts in 2018 to support a market that could be as low as 30 gigawatts," and the full impact of weakening end-market conditions remains to be seen on GE's power segment.

A key part of Flannery's strategic plan is to focus the business on power, aviation, and healthcare. The good news is that orders in non-power segments continue to impress. In a nutshell, GE is going to need the healthcare's strong cash flows and growth from its aviation segment in order to support its ailing power segment while management tries to restructure it. 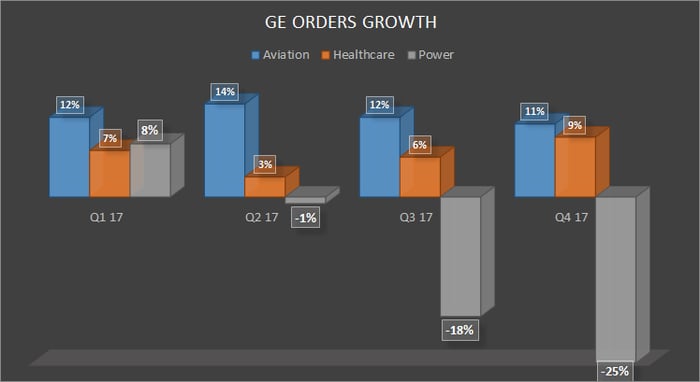 On a headline basis, GE's earnings came in pretty much in line with previous guidance. and there was no change to the 2018 outlook for EPS and cash flow. That's relatively good news. However, the SEC investigation into contract assets is a concern, and power's ongoing end-market deterioration suggests it's going to take time to turn the segment around. Fortunately, aviation and healthcare continue to do well, and Flannery seems to be making progress on his aim to change the operational focus onto cash-flow generation.

Cautious investors will want to wait until the SEC investigation is complete and/or GE starts stabilizing its outlook -- let alone its earnings -- on its power segment. Until it does, the risks of both bringing further disappointment will hang over the stock.