Shares of industrial behemoth General Electric (NYSE:GE) have been in a tailspin ever since the company named John Flannery as its new CEO last June. Flannery hasn't exactly done anything wrong -- rather, he revealed that there had been huge problems brewing under the surface for some time, especially in GE's power business.

The stock slide accelerated last week, after General Electric announced that it would take a big charge related to rising claims in an old GE Capital insurance portfolio. GE stock has now lost more than 40% of its value since the company announced Flannery as its new leader. 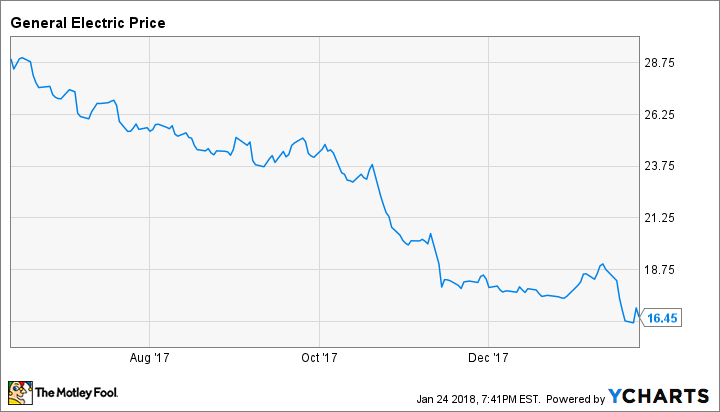 The numbers at a glance

GE reported a big adjusted loss of $1.23 per share in Q4, because of various charges it incurred last quarter. Excluding these charges, EPS came in at the low end of GE's guidance range, and slightly below the average analyst estimate. The company's quarterly revenue of $31.4 billion was also disappointing, missing analysts' expectations for revenue of about $34 billion.

Flannery has expressed an interest in exiting the oil and gas business, because results there are tied too closely to commodity prices. The recent uptick in oil prices should boost Baker Hughes' revenue and earnings growth, making it easier for GE to exit its stake in Baker Hughes, which is currently worth about $24 billion.

Most of the "new General Electric" isn't struggling at all

In addition to getting out of the oil and gas industry, Flannery wants to sell off various other non-core businesses. This would leave a "new GE" that focuses on power (including renewables), aviation, and healthcare -- along with a GE Capital segment to finance deals in these areas.

The power business remains a basket case. Last quarter, revenue fell 15% year over year, while orders plunged by 25%. This performance caused segment profit to plummet to just $260 million, compared with more than $2 billion a year earlier. Management said several charges negatively affected the segment's fourth-quarter earnings, but even without those charges, its profitability fell short of expectations. The GE Aviation business -- the company's crown jewel -- also continues to excel. Revenue was approximately flat last quarter, while segment profit rose 2% despite a tough year-over-year comparison. For the full year, segment profit reached $6.6 billion. This performance represented a 9% year-over-year increase, far better than the 5%-6% growth predicted by management just two months ago. The aviation business should continue to deliver high-single-digit profit growth in 2018 and beyond.

One final piece of good news was that full-year adjusted industrial cash flow surged past GE's guidance by $2.7 billion. This performance shows that GE's new focus on cash flow is already paying off. The company maintained its guidance for 2018 industrial free cash flow of $6 billion-$7 billion.

The recovery will take time

During the next two years, General Electric's management has two primary tasks. First, it needs to cut costs at the corporate level and in the power segment specifically, to respond to weaker market conditions. Second, it needs to simplify the company by selling off non-core parts of the business.

There will undoubtedly be ups and downs during this process, so GE stock could remain volatile. However, as long as the aviation and healthcare segments continue delivering steady profit growth, GE shares could have a lot of upside in the long run.