In a history that includes many firsts, it's understandable if Alphabet's (NASDAQ:GOOG) (NASDAQ:GOOGL) latest accomplishment fell under the radar. Somewhat overshadowed by Apple's (NASDAQ:AAPL) run to become the first $1 trillion company, Alphabet recently became the second publicly traded company to reach an $800 billion valuation. (Note: Though largest ever in nominal terms, these companies' market capitalizations are not historically the largest when adjusted for inflation.)

As with the "Dow 25,000," investors should look beyond an arbitrary number when valuing Alphabet's stock. Although Alphabet has done an admirable job growing its market capitalization to this point, the key question is whether the technology behemoth can continue to add to its gains. In light of Alphabet's psychological milestone, it's prudent for investors to ask if the company is still a strong investment. 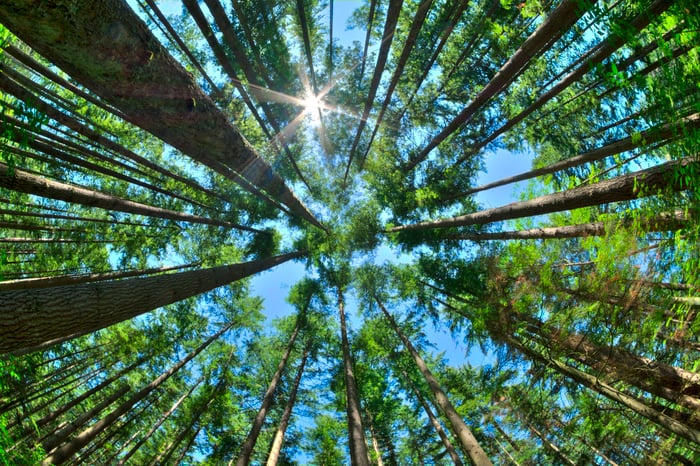 Expectations are higher for Alphabet

You may be familiar with the old investing maxim "Tall trees don't grow to the sky." Just like a tree, a company's market cap can't keep growing ad infinitum. Generally, that's reflected in investor sentiment. As a company becomes bigger, investors become less bullish on its ability to continue to post strong growth. As growth-oriented investors sell shares, the company will trade at lower valuation multiples. That's the framework; however, Alphabet appears to be a rare exception to this rule: 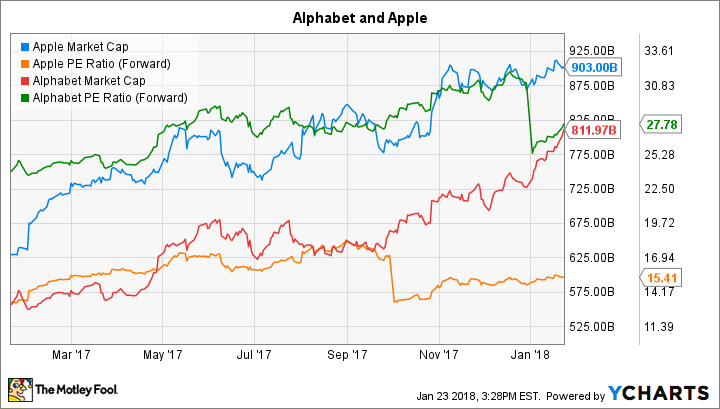 It's been a good year of returns for Apple and Alphabet, with both increasing total market cap by more than 40%. While both have maintained roughly the same forward price-to-earnings (P/E) valuations as they've expanded their market caps, there's a clear-cut distinction between Apple and Alphabet. As the chart shows, Alphabet is currently valued at 28 times earnings while Apple only trades at a 15-times valuation. As a point of comparison, The Wall Street Journal estimates that S&P 500's P/E ratio is roughly 19 times forward earnings.

Simply put, although Alphabet is an $800 billion company while the median market capitalization of the S&P 500 is $22 billion, investors are willing to accept a nearly 50% higher multiple for estimated future earnings to own Alphabet than the S&P 500. Alphabet's market capitalization is boosted by above-average levels of investor sentiment, which assumes the company will need to continue to grow earnings at a rapid clip.

Alphabet benefits from favorable tailwinds in its core digital-advertising business. According to estimates from marketing research company eMarketer, Google will garner $40 billion in digital revenue (after traffic acquisition costs) this year, which equates to 43% of total U.S. digital advertising revenue.

In marketing, it's often said that dollars follow eyeballs. This is good news for Alphabet. eMarketer expects digital advertising will grow 13% as a combination of increased marketing spend and a shift to digital marketing will occur. The digital channel -- mostly mobile advertising -- is projected to benefit in part from slower growth in television and print advertising. eMarketer expects by 2021 digital advertising will grow to 49.9% of total U.S. media ad spending, up from 36.7% in 2016; TV's share will fall from 36.6% to 30.8% while print's will fall from 13.4% to 9.3% during the same period.

The upshot: Don't fear investing in Alphabet simply because it has a high market capitalization and the easy money has already been made; the company will continue to grow both its top and bottom lines due to its enviable leadership position in a market with considerable tailwinds. Next stop: $900 billion.