Harley-Davidson (NYSE:HOG) is trying to reverse its four-year long sales slide, but the actions it's taking may be ineffective, or actually doing more harm than good. The latest initiatives, which expand its riding academies and partner with rental agencies, offer a mixed bag of sorts. Both programs make sense and are part of CEO Matt Levatich's commitment to bring 2 million new riders to the brand over the next 10 years, but there's a downside too.

The rider training programs get more people on a bike, teach them how to ride properly, and, by doing it through a Harley-Davidson dealership that provides the bike to learn on, can potentially generate a halo effect that results in new riders buying a new Harley. Similarly, the rental program offers the potential for people to have a positive experience on a Harley, which will lead them to buy the latest models.

The problems may arise in the execution. 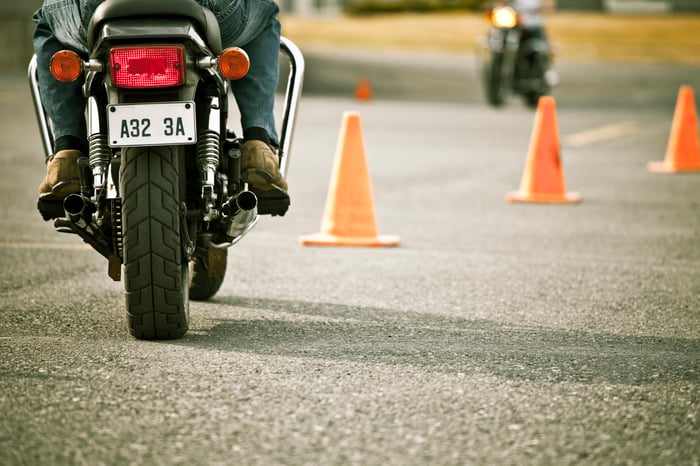 Get on and ride

Harley-Davidson is expanding the rider training program that was launched in 2000 at about 50 dealerships. It has since grown to five times that number and has trained tens of thousands of riders to safely ride a motorcycle. In June 2017, Harley-Davidson offered to teach an entire town to ride, got 70% of the residents to participate, and 15% to 20% ultimately went on to buy a new Harley-Davidson. Sure, the town had fewer than 100 residents, but it showed the potential of what was possible.

The problem is that Harley has run this campaign numerous times over the years, kick-starting it over again each time with little real progress made.

For example, in 2014 the Harley-Davidson Riding Academy made it possible for students to learn on a bike provided by the dealer. It had recently introduced its new Street line of bikes, and the 500 model was provided to students to use during the four-day course. It seemed intuitive that sales of Street 500s might rise after students graduated.

Although it may have helped a little, sales of Street bikes, both the 500 and 750 models, have long since tailed off. Last quarter, Harley-Davidson reported that shipments of Sportster and Street bikes fell 14% year over year and they're down nearly 11% year to date. At this time last year shipments were essentially flat through the first three quarters, though its third-quarter shipments were down 13% from the prior period.

There's something to be said about generating goodwill from training new riders, investors just shouldn't expect bikes to begin flying off the dealer lots as a result.

The same goes with Harley-Davidson's exclusive partnership with EagleRider, a global motorcycle rental agency, or what company co-founder Chris McIntyre calls "an experience company." Started with just four bikes in a garage, it has become the largest rental company in the adventure travel industry, a $300 billion global opportunity.

EagleRider will be partnering with approximately 150 Harley dealers in the coming months to provide riders the opportunity to walk into a dealer, experience a unique trip of their own choosing or one mapped out by the rental agency, and drop off the motorcycle near their destination.

Harley views it again as an opportunity to build its ridership base by giving renters a chance to cruise the country aboard a Harley-Davidson motorcycle. The thinking is, once experiencing the exhilarating thrill of the bikes, the riders will come back and buy one, particularly as EagleRider will sometimes have access to the newest models, sometimes before they're even on the dealers' showroom floors.

While that could bring new riders or riders new to the Harley brand the chance to experience what it's like to ride a Harley -- Harley-Davidson's are the bikes most in demand with EagleRider -- McIntyre does admit many renters are existing Harley owners. In many ways, EagleRider is the more interesting story, and it's possible its partnership could spur new sales, but probably not at the rates some might expect.

Also, not all dealers have bought into the idea. When Harley ran a previous rental program, it was done in-house and when the used bikes were finally taken out of the program and sold, the dealers got part of the profit from the sale. Now the bikes belong to EagleRider and the dealers are cut out of the loop.

While there is certainly an argument to be made in favor of the two programs the bike maker is using to increase Harley's halo effect, they're not going to move the needle, at least not anytime soon. The Riding Academy and EagleRider rental partnership may be two avenues to bolster the long-term reputation of Harley-Davidson as the premiere motorcycle company, but in terms of putting dollars in its dealers' pockets and moving more motorcycles off the showroom floors, their impact may be limited.