The motorcycle king's stock is rebounding, but it really shouldn't be.

Harley-Davidson (HOG 2.46%) may have beaten Wall Street's profit expectations, but that's because analysts had set the bar so low. The third-quarter earnings report was actually quite bad. In fact, it was even worse than you might think.

The motorcycle giant can't move its bikes. Sales and shipments for the period are at their lowest level since the Great Recession, and things are deteriorating rapidly. Harley shipped fewer than 20,000 motorcycles to U.S. dealers in the third quarter -- a shockingly low number -- and only half as many as it said it would last quarter. Management said the pullback was purposeful, to clear out dealers' inventory, yet that decision also hurt sales. 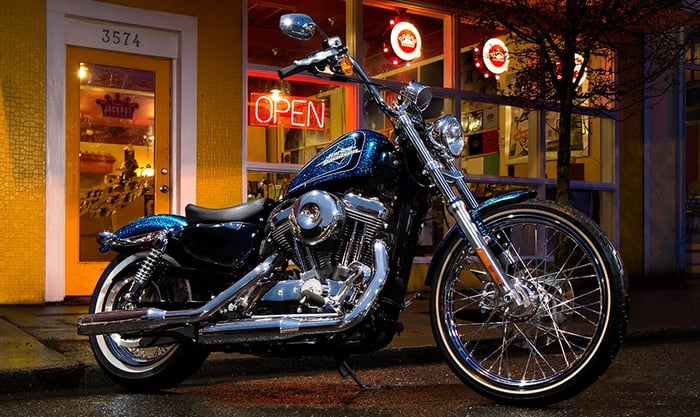 Against these anemic results, guidance was ambitious. The fourth quarter is typically Harley-Davidson's slowest period of the year, yet the company expects to ship as many as 51,700 motorcycles this period. For comparison, even though sales are down 6% year to date from last year, and Harley shipped only 42,400 bikes last year, it expects to ship 22% more bikes this quarter.

Management asserted that because it has tightened inventory so much, it will be able to drastically increase shipments in the months ahead. Certainly factoring into the projections are the new models Harley-Davidson unveiled as part of its program to build 100 new models over 10 years -- it wants dealers to have sufficient inventory on hand for the spring buying season. However, in the current U.S. market conditions, it's not realistic to expect enough demand to sustain that level of shipments, particularly because global sales are slumping too.

International sales once helped keep Harley's situation from looking bleaker than it was, but these days the company's having trouble selling bikes overseas. While it was able to sell 163 more motorcycles in Europe in the third quarter than it did a year ago, every other region saw lower sales, with Japan suffering a 15% year-over-year drop and Latin America dropping 11%. Harley has been pushing more bikes out into foreign markets in the fourth quarter, but that's going to be harder to justify now with international markets having suffered their fourth straight quarter of lower sales.

The U.S., of course, remains Harley-Davidson's biggest and most important market, accounting for two-thirds of its retail sales. U.S. sales were down 8% compared to the year-ago quarter, though Harley notes the overall U.S. industry was down over 9% for the same period...so it's winning, right? 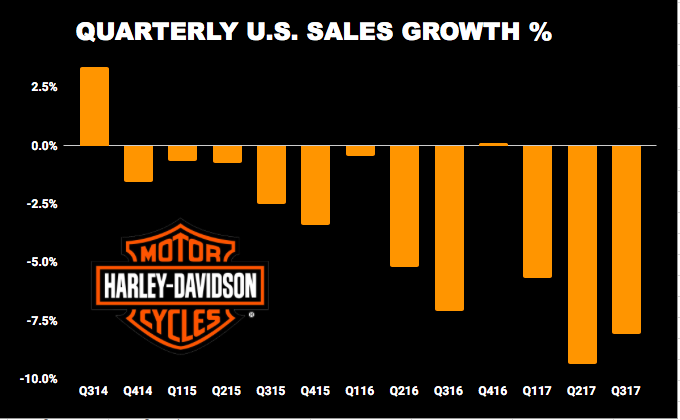 The decline in its traditional core customer base -- middle-aged, white, and male -- has left it scrambling to attract new bike buyers who are more often than not female, minorities, young adults, and people living in urban areas. While Harley has committed to adding 2 million new riders to its brand while also growing its international business by half, it's an ambitious program that is made even more challenging by an industry that's in a tailspin.

The tough times are causing rivals like Polaris Industries (PII 1.50%) to engage in steep discounting programs to retain market share. Harley-Davidson has largely avoided joining the promotional fray, which is likely what's allowed it to beat analyst profit expectations. Even so, net income plunged 40% in the third quarter to $68.2 million.

As management pointed out, Harley isn't the only company facing the problem. Declining sales are endemic to the industry, despite Polaris enjoying considerable success still with its Indian Motorcycle brand. Yet as the largest motorcycle manufacturer in the country, with a 53.1% market share for motorcycles with engines of 601 cubic centimeters and larger, Harley is going to feel the effects more.

The problem is management looks like it's whistling past the graveyard. Sales are declining here and abroad, yet it thinks it should still be pushing more motorcycles on to dealers at this time.

With Harley-Davidson suffering from one of its worst post-recession slumps, investors should be leery of this stock: There's more risk of road rash ahead than chances of finding open roads to go full throttle.

Why Harley-Davidson Stock Was Roaring Ahead Today
371%